This is Blog part 5/6 before we run back the new version. 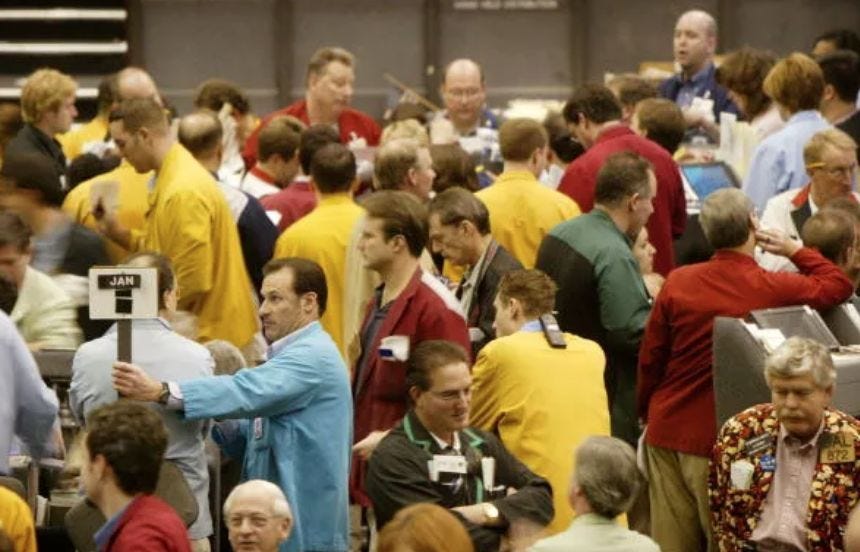 Things got weird last week I'm not gonna lie. Jesus Christ once said ask and you shall receive. He was not kidding.

For those unfamiliar, this is a weekly series documenting Stoolie trader stories. By Stoolies, for Stoolies. Reason being is traders are sincerely a psychotic and warped breed of human being. That's not necessarily a bad thing:

So far we've seen hooker fights in bangkok, cocaine at Ditka's during lunch, stolen powerball tickets, kids eating the entire vending machine, grown men jumping off the Michigan Ave. bridge in December and the list goes on. If you have an anonymous story worth sharing with the masses send me an email carl@barstoolsports.com. Your story must be told.

On to this week:

So an intern down here just made a quick $1k. All he had to do was get a reverse mohawk and keep it for a week. Pics Attached 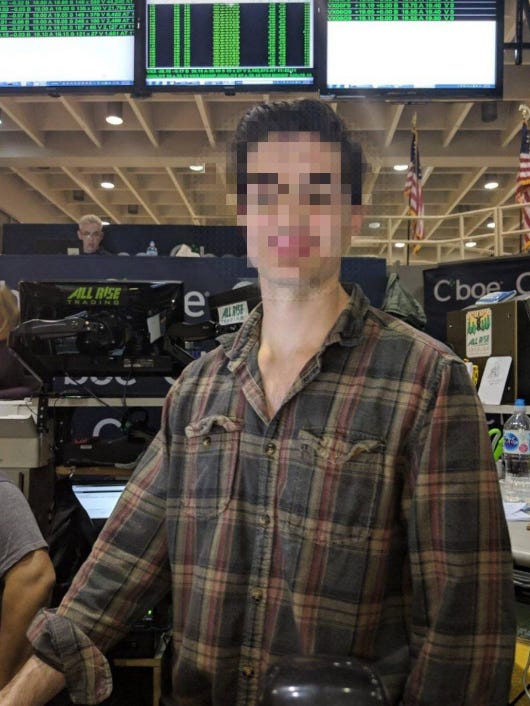 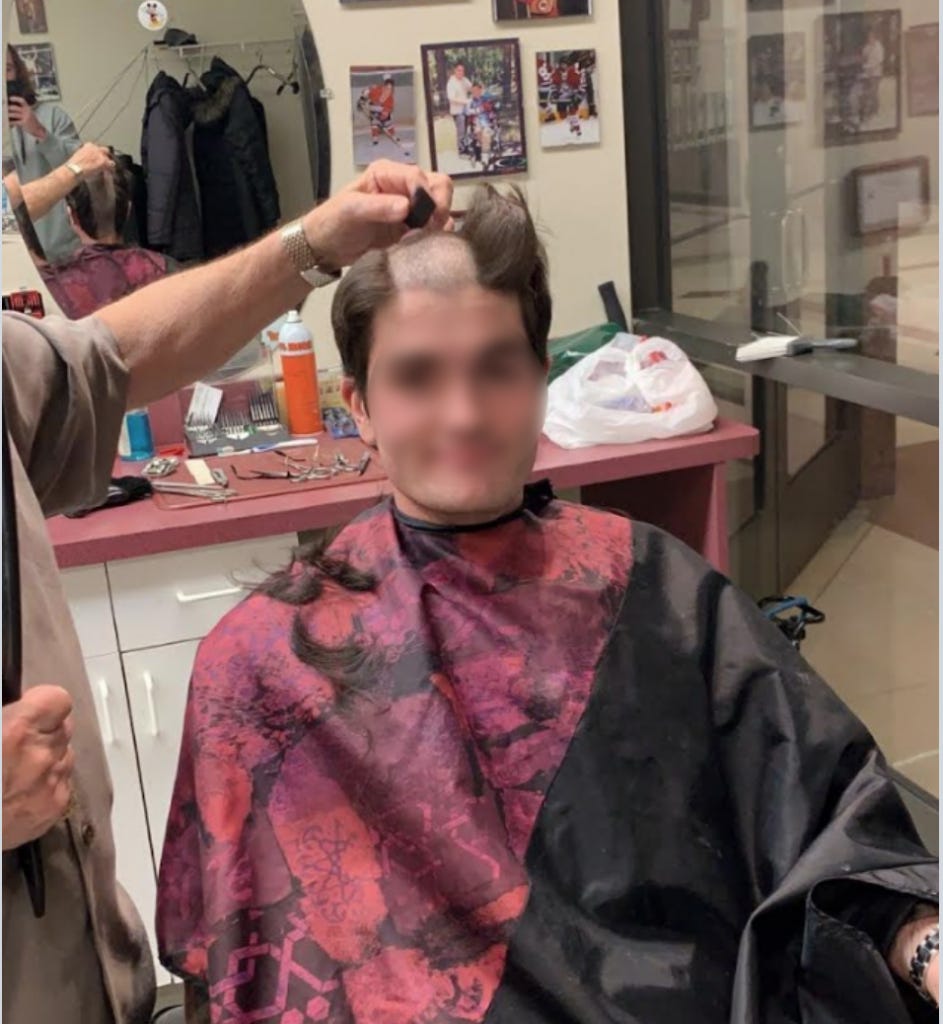 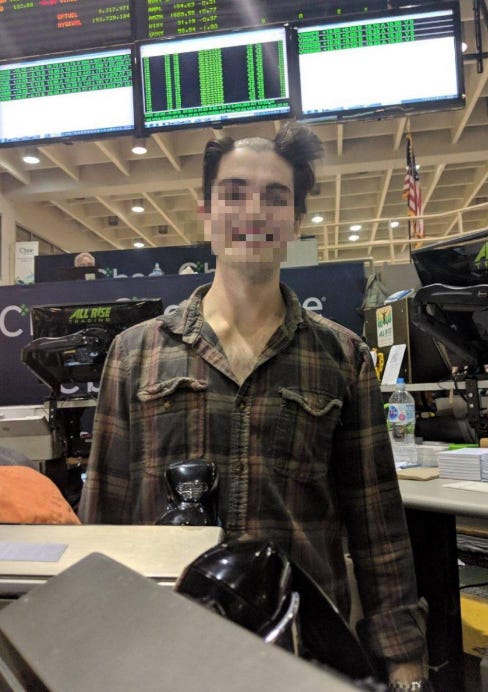 I hope this kind went to Indiana and was studying finance. Got super excited when Uncle Tim offered him a job for the summer only to be turned into a little bitch day one. By the look of the smile he's enjoying it so obviously no harm or foul, especially with money on the table. That said, if you think your trading career is going to start with robust PowerPoints and ill-fitting JoS. A Bank suits, you got another thing coming. Would be like a bullpen catcher showing up to spring training and thinking you're going to make an impact this season when in reality you just do a bunch of bitch work while the wealthy veterans supplement your income with barbaric tasks, like this next guy:

One unbearably slow day, this fat slob in the Fed Fund Options pit won’t shut the fuck up about the planters wart he had on the bottom of his foot. Just moaning and groaning on and on about this thing, and next thing you know, every trader has their amateur podiatrist hat on examining this fucker the size of a silver dollar on the ball of his foot.

Everyone has an opinion on what to do, whether it’s a cream, a powder, new socks, no socks, here’s my brother in law’s card he’ll take care of it for you, etc. Finally we come to the consensus that we’re giving the guy $1k to cut it off there on the spot and a bidding war starts on how much for someone to eat it.

Obviously it starts at like $50k, but the CBOT floor is a ruthless place where the true value of any commodity can be discovered pretty quickly. Efficient markets prevailed, and some young runner who was probably making $300/week under the table took delivery on the first planter’s wart traded on the CBOT for less than a week’s salary.
I puked my guts out watching and am close to doing it again at the thought.

Give me a second

Those traders are always creating their own markets. Whether it's subprime mortgages or municipal bonds or eating a planters wart off the foot of an older man. If there's a demand, traders will find a way to create the supply no matter how disgusting or immoral. Your entry-level economics professor calls that Efficient.

Saturdays Are For The Boys

A CBOT trader passed away many years back.  At his funeral many of his fellow traders meet with his widow to give their condolence. She was very appreciative of them coming.  In conversation she continued to say how much hard of workers you all must be having a 6 day workweek.  They all looked at each other in surprise and corrected her that open out cry was only monday to friday. It was at that moment the widow realized that for the past umpteen years he was telling her he was going to work on Saturday, he was out doing who knows what.

Literally deny until you die.

I'm not a trader any more but cleaned up the 90's and early 00's after catching the break of a life time. At the time I was living couch to couch after moving to Chicago from Oklahoma. I graduated in the early 90's and moved to Chicago to trade but couldn't catch on anywehre consistently. I had no money and no family in Chicago but a couple buddies of mine had jobs and we wanted to make it so we were like fuck it let's go to Chicago. After a few months of bar backing in Lake View I catch on as a runner at the Merc after meeting this old guy in Wrigley one day with my buddies. We get hammered with these random guys and along the way the story comes out that I was dying to get a chance trading.

The guys love me because I was from Oklahoma and knew a lot about agriculture but more importantly Dairy. Hardly actually but around the time I was breaking in there was a bunch of shit going on with the markets in dairy so I played up my farming background and next thing you know they're telling me to show up at the Merc on Monday at 5am. And then next thing you know from there, I'm in dairy trading, working way my way up. Then in 96 Clinton drops the Farm Bill which basically took the government out of pricing dairy which meant pricing volatility which meant time to make some money. Come around 2000, the NYSE shuts down their dairy contracts meaning the CME was the only place you buy and sell futures and options on dairy.

Long story short, I made a fortune and have been retired for almost 11 years. By all measures my adult life has been extremely lucky and it's all because I got hammered in the bleachers with some random dudes in July 1993. Life is crazy man.

I need to do more drinking in the Wrigley bleachers which is literally something I never thought I'd sincerely say. Just seems like that's the logical connection from this story. If you get hammered in the bleachers, good things can happen.

Another logical connection is that sometimes most of the time you just have to bullshit your way into things and hope it turns out okay. Weaker people call that taking a risk. Traders call it going to work.

Send me your stories carl@barstoolsports.com