Since 2006, I have been rating every movie I see throughout the year on a 0-100 scale. I have a methodology that I have laid out before and can put at the bottom of this post. Starting today, and lasting until January 31st, I will be counting down my 2018 movie rankings from number 205 all the way to the number one top spot! For the next two weeks, I will be doing two sets of movies per day and then finishing with 10 per day. Today’s rankings will cover movies 011 through 030. Enjoy! 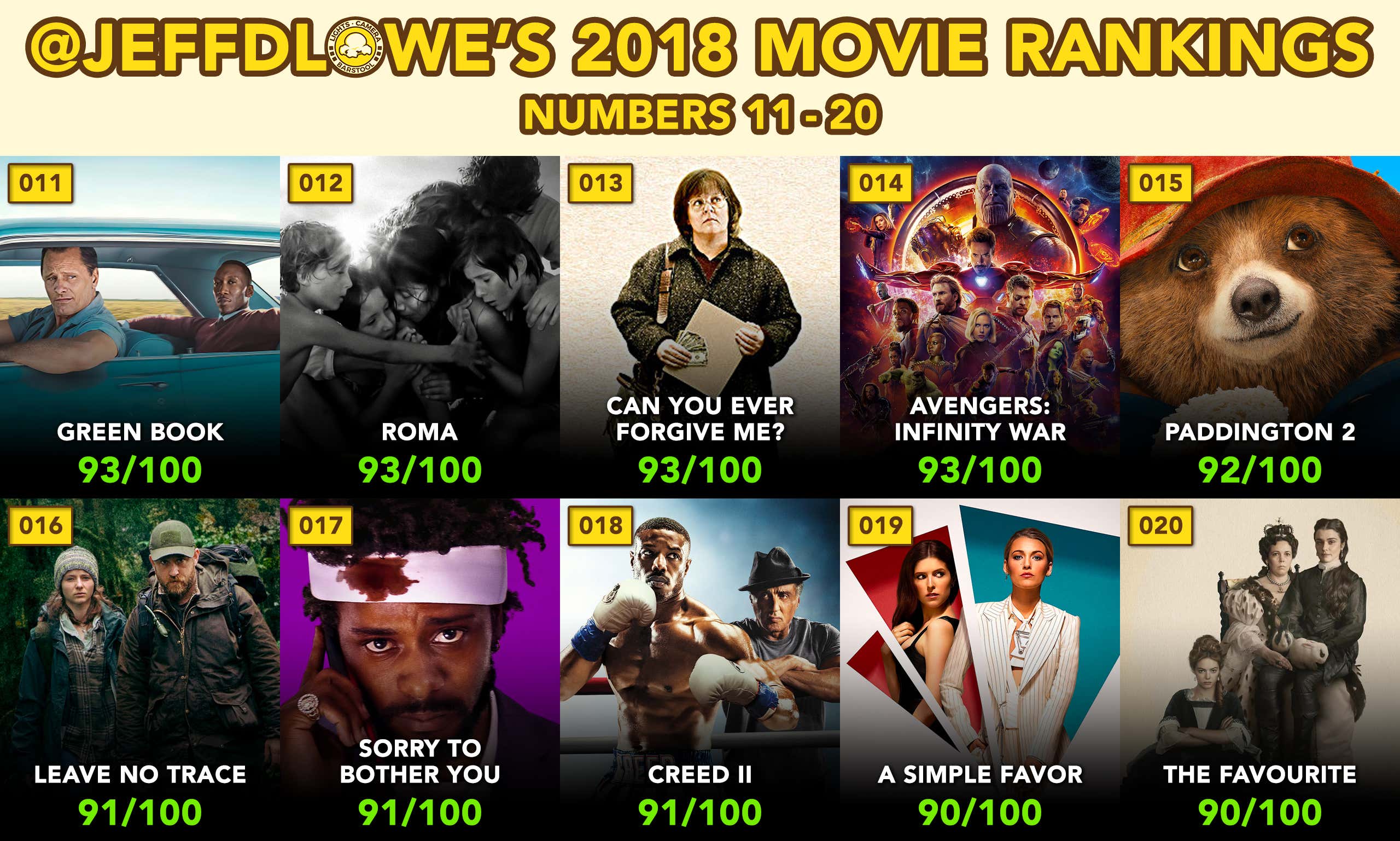 011-020: So close to the Top 10! A few of these movies could have made that Top 10, but they just miss the list on account of some tiebreakers. Nevertheless, all 10 of these are absolute must-sees and flat out great movies. Controversy aside, I really enjoyed ‘Green Book’ and it was in large part due to the fact Mahershala Ali and Viggo Mortensen turned in possibly the best performances of their respective careers. The movie has taken a lot of heat from the real-life family Doctor Shirley and two of the three writers are in hot water, but in the vacuum of the movie itself, I thought it was excellent. ‘Roma’ is a tough movie for me to talk about because I didn’t enjoy it as much as the other movies in this group of ten, but can’t help but recognize the incredible filmmaking from Alfonso Cuaron. It’s clearly a very personal story for the Oscar-winning director and it very well might be the best visual achievement of the year. He’s very deserving of the Oscar for Best Director and, at the time of me writing this, I’d lean to ‘Roma’ being the favorite for Best Picture. The best performance by an actress for me this year came from Melissa McCarthy in ‘Can You Ever Forgive Me?’. The movie hit on so many different themes and had an intricately written story with so many hilarious exchanges between the irritable, struggling true-story character McCarthy plays and the other characters, which includes a great performance from Richard E. Grant. This movie played in, I think, five theaters across the country, but is being re-released this month. Everyone should go check it out. I don’t really need to say much about the biggest movie of the year, and one of the biggest ever made, but ‘Avengers: Infinity War’ was dynamite in my eyes. Lead by the second best villain in comic book history with Thanos, ‘Infinity War’ ranks just behind ‘The Dark Knight’ for my best comic book movie ever made. The fact that the Russo Brothers were able to mesh and weave together so many different characters to put together a great, clear and cohesive movie is wildly underappreciated. Holy shit ‘Paddington 2′ was delightful. This movie came out in the United States in 2018 but was released overseas in 2017, which was likely the cause for it being a bit forgotten about as the year moved on. With that said, the best-rated movie ever on Rotten Tomatoes is enjoyable for all ages and probably deserves more award season recognition. ‘Leave No Trace’, is a gritty, real look at a father and daughter fighting obstacles to survive in the world and a great return to the big screen for writer-director Debra Granik. Boasting a 100% on Rotten Tomatoes, ‘Leave No Trace’ is also carried by two of the best performances of the year from Ben Foster and Thomasin McKenzie. The emotional ups and downs of this movie will pull you in right from the start. It’s hard to talk about ‘Sorry To Bother You’ in too much detail because spoiling any part of this movie would be a disservice to the viewing experience. Boots Riley, who had a great twitter thread about this movie not getting any love from the Oscars, debuted as a writer-director with a crazy satirical-comedy-sci-fi movie that has layers of social commentary that are laced throughout with perfection. In this day and age with Hollywood, there are too many wink-wink moments with social commentary, but Boots Riley walks a fine line throughout ‘Sorry To Bother You’ and tells a natural, albeit, insane story. It also has a standout performance from Lakeith Stanfield, who you will surely be seeing much more of over the next few years. I absolutely loved ‘Creed II’ and it might have been campy at times, but it was an excellent follow up to its predecessor. There are depth and emotion to go along with the boxing side of the movie and every bit of the story is relatable for the audience. A newcomer to the blockbuster directing scene, Steven Caple Jr. told the story through some genius visuals, as he changed the type of shots and camera movements used based on the emotions and ups-and-downs of both main characters. The future is very bright for Caple Jr. and it’s awesome to see the Rocky franchise revitalized with these two great rebooted-sequels. ‘A Simple Favor’ was a stellar bounce back for Paul Feig following that disastrous ‘Ghostbusters’ reboot and one of the surprise movies of 2018. A dark comedy thriller, ‘A Simple Favor’ has an A+ script to pair up with the fantastic push-and-pull duo of Anna Kendrick and Blake Lively. Lastly, ‘The Favourite’ is another one of the standout movies of 2018. While I don’t have it at the top of my list as many people do, it is still easily one of the year’s best. All three performances from Olivia Colman, Rachel Weisz, and Emma Stone lift this movie up to heights I did not expect. This is the classic example of not judging a movie by its trailer, as I expected a snobby royals-based movie with a pretentious fell much like in the movie ‘Phantom Thread’. Instead, we got a brilliantly put together movie that uses dark comedy to slice through the time period the movie is set in. 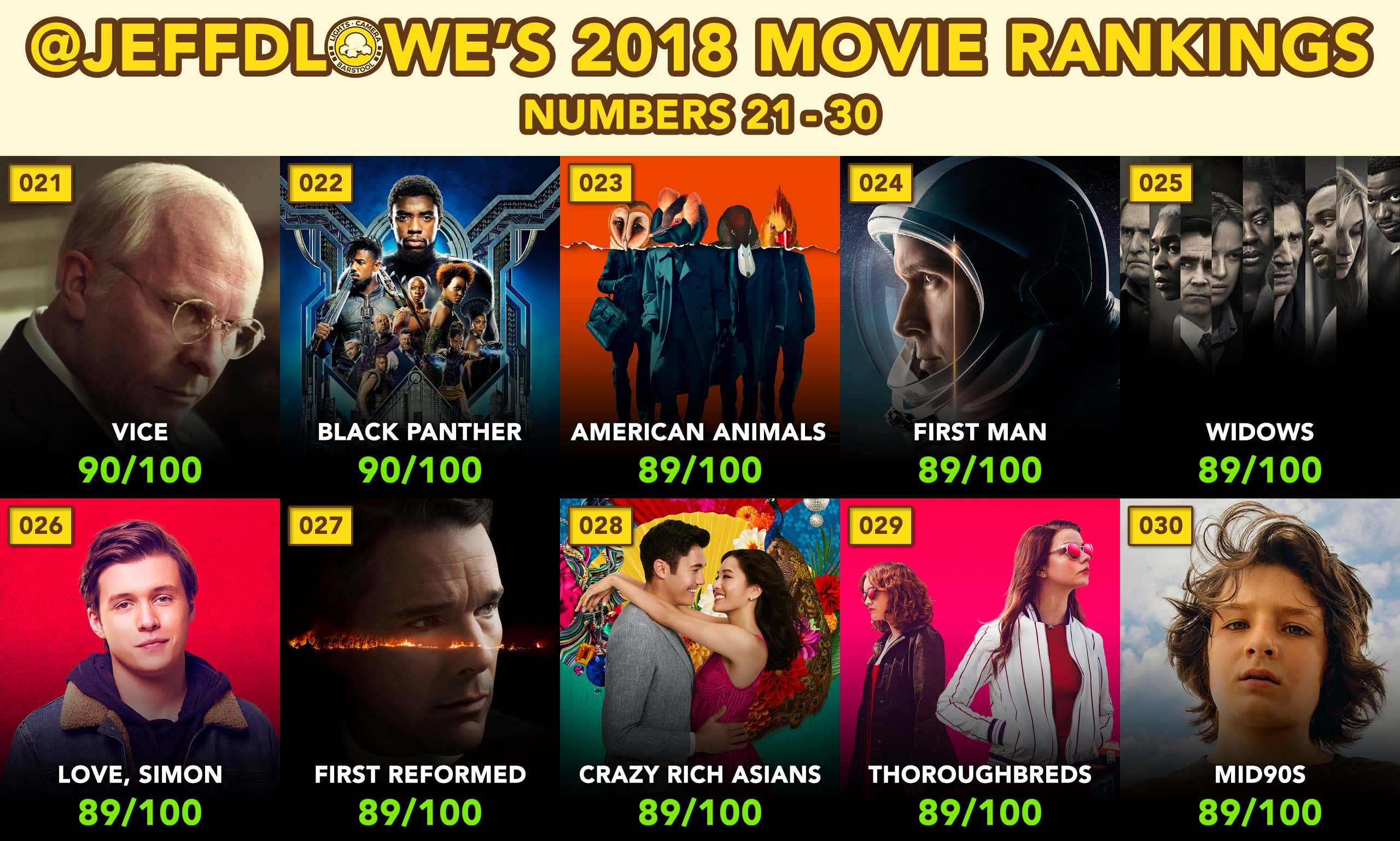 021-030: With movies rating 90/100 in this grouping, we are still in the territory where I’d consider movies to be “great.” ‘Vice’ was incredibly divisive and not for everyone, but I am a sucker for anything made by Adam McKay. His satirical style and comedy played perfectly for me. The serious roles of the Cheneys, lead by fantastic performances from Christian Bale and Amy Adams, meshed great with the exaggerated caricature supporting players. Bale deserves the Oscar for Best Actor in a Leading Role and it will be a shame if Rami Malek beats him out for it. ‘Black Panther’, like ‘Vice’, was a great movie that I felt fell short of deserving an Oscar nomination. With that said, it’s a fantastic movie and one of the better comic book movies ever made. It had depth, emotion, and cultural importance. The villain, played by Michael B. Jordan, is what really took this movie to the next level. Having a mad man with a fairly relatable cause makes the story far more complex and bucks the notion that Marvel can’t produce good villains. ‘American Animals’ is a movie that hasn’t been discussed all that much and that’s quite unfortunate. Distributed by MoviePass (weird), the true-story art heist has an incredibly engaging, intense and funny story with a great cast to boot. ‘First Man’ and ‘Widows’ were two movies I felt just missed on a few elements, which kept them from being Top 10 or Top 5 movies of the year. Some people found ‘First Man’ boring, but I felt it just suffered a bit from pacing issues. The look of the moving, shifting from old 16mm cameras on Earth and IMAX cameras in space was fucking brilliant and a spectacle on the big screen. ‘Widows’ was very enjoyable, dark and had a narrative and message that resonated. I loved all of the performances but felt the last third of the movie was just a hair unfocused. It was still really good, don’t get me wrong, but damn was it close to being great. The LGBTQ-centric ‘Love, Simon’ was the best coming-of-age movie from 2018 and packed an important message and story that isn’t told enough in cinema. Speaking of important movies, ‘Crazy Rich Asians’ was a milestone as an American blockbuster lead by an Asian-American cast. It’s always great to see cultures represented on screen on such a wide scale and it helped a lot that ‘Crazy Rich Asians’ was one of the best rom-com from the last few years. Ethan Hawke, as I mentioned in my blog yesterday, is on a roll lately and ‘First Reformed’ is a great example. His performance was overlooked for the Oscars and certainly one of the five best performances of 2018. For a crazy ass movie, check out ‘Thoroughbreds’, which has some shocking most, dare I say some of the most shocking moments of the year. I also loved the chemistry between Anya Taylor-Joy and Olivia Cooke and I can’t go without mentioning that this was Anton Yelchin’s last movie (rest in peace). Lastly, ‘Mid90s’ was a stellar debut from writer-director Jonah Hill. It was a fascinatingly raw look at youth in the 90s and has a heart-to-heart monologue from Na-kel Smith to main character Sunny Suljic that will touch everyone emotionally for many different real-life reasons.