Source – Nineteen years since the last Super Bowl in Atlanta, a tragic mystery still endures about what happened in the early morning after that classic game between the St. Louis Rams and Tennessee Titans.

It remains an unsolved case. Nobody was convicted for, or confessed to, the fatal stabbings of two men outside a nightclub in the city’s Buckhead district. Only one person – Hall of Fame linebacker Ray Lewis – pleaded guilty to a crime related to their deaths, for obstructing justice.

Lewis, then a standout for the Baltimore Ravens, didn’t play in that game on Jan. 30, 2000. He came to Atlanta to party instead, dressing for the nightlife afterward in a cream-colored suit with a mock neck sweater and Stetson hat. But that suit hasn’t been seen in public since the night Lewis’ limousine left the bloody crime scene, leading to a question that has haunted the families of the deceased: What happened to the suit Lewis wore that night? …

Nearly 20 years after that Super Bowl night, Lewis and the victims’ families now propose completely different theories about what his clothing that night means to the unsolved case.

Handsome Lollar, who was about 10 years old at the time of his brother [Richard Lollar]’s death, sells a clothing line in his honor. It’s called “I Am Rich.” He despises Lewis.

“I don’t say his name,” Lollar said of Lewis. “(Expletive) that (expletive). That’s what I got to say. If you’re writing that story, can you put that first? (Expletive) Ray Lewis. Shop `I Am Rich.’ Can you put that in headlines, please, sir?” …

In Atlanta, Lewis is scheduled to host a party this week to benefit his foundation, rekindling memories of the last time he partied on the scene of an Atlanta Super Bowl.

For starters, it’s hard to believe it’s been almost 20 years since Richard Lollar and Jacinth Baker lost their lives. Two young men who had barely reached adulthood, senselessly deprived of the chance to grow old. In a fight over nothing. It’s impossible to imagine what it must be like for their families to have to spend two decades without a conviction. Living each day knowing the killers remain free, their prayers for justice unanswered. You can just read the anguish in Handsome Lollar’s words. Read it, but never be able to fully comprehend it, or the feeling of having to grow up without his brother.

Click the link above to read exhaustive, in-depth and thorough reporting on the different theories about what happened to Ray Lewis’ blood-soaked suit. Court documents allege Lewis’s mother got rid of it. Ray claims he has no idea. He’s also said he was nowhere near the murders when they happened and didn’t see anything. There’s a report that when the other men in Lewis’s limo were answering questions from police at the scene, he yelled at them to “Shut the fuck up.” One of his friends claimed his clothes went missing when he was taking a shower at Lewis’s hotel room and he was handed a sweatsuit to wear that was way too big for him. Ray’s lawyer once told an interviewer the clothes went to the dry cleaner and were never seen again, but no evidence was ever produced. The article quotes Lewis in his own book saying “’I must have been wearing a quarter-million dollars’ that night with his suit, jewelry and mink coat.” And yet somehow he lost track of where that $250,000 ensemble might have ended up.

Of course, at least one person does know what happened to Ray Lewis’s clothes. Ray Lewis. But the man who never met a microphone he wouldn’t talk into and who won’t shut up about anything else won’t talk about this. Even if it would help the victims’ families to heal. Even if the God Lewis was pictured praying to on the cover of Sports Illustrated twice commands it. 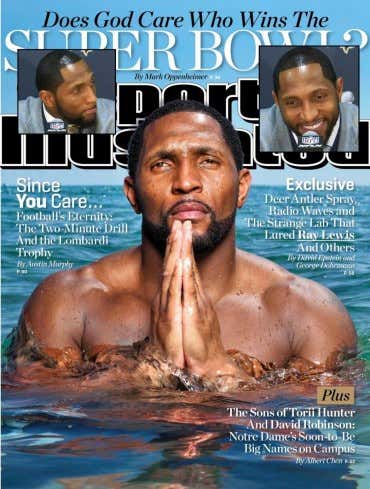 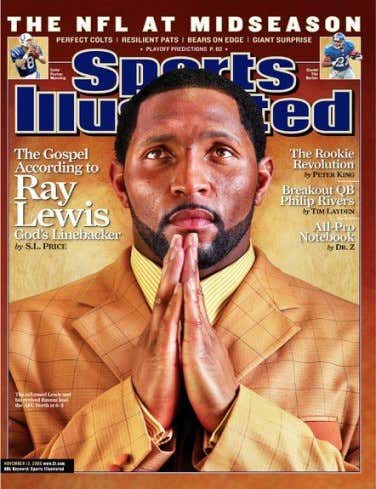 “He who conceals his transgressions will not prosper, but he who confesses and forsakes them will find compassion.” – Proverbs, 28:13

“I haven’t seen the suit I wore that night.” – Ray Lewis, in court, having solemnly sworn to tell the truth, so help him God.

So anyone who’s in Atlanta this week – literally the scene of the crime – and goes to Ray Lewis’s fundraiser, feel free to ask him to take a couple of hours while he’s in town to retrace his steps and see if something turns up. On second thought, don’t. Enough blood has been shed.