Since 2006, I have been rating every movie I see throughout the year on a 0-100 scale. I have a methodology that I have laid out before and can put at the bottom of this post. Starting today, and lasting until January 31st, I will be counting down my 2018 movie rankings from number 205 all the way to the number one top spot! For the next two weeks, I will be doing two sets of movies per day and then finishing with 10 per day. Today’s rankings will cover movies 031 through 050. Enjoy! 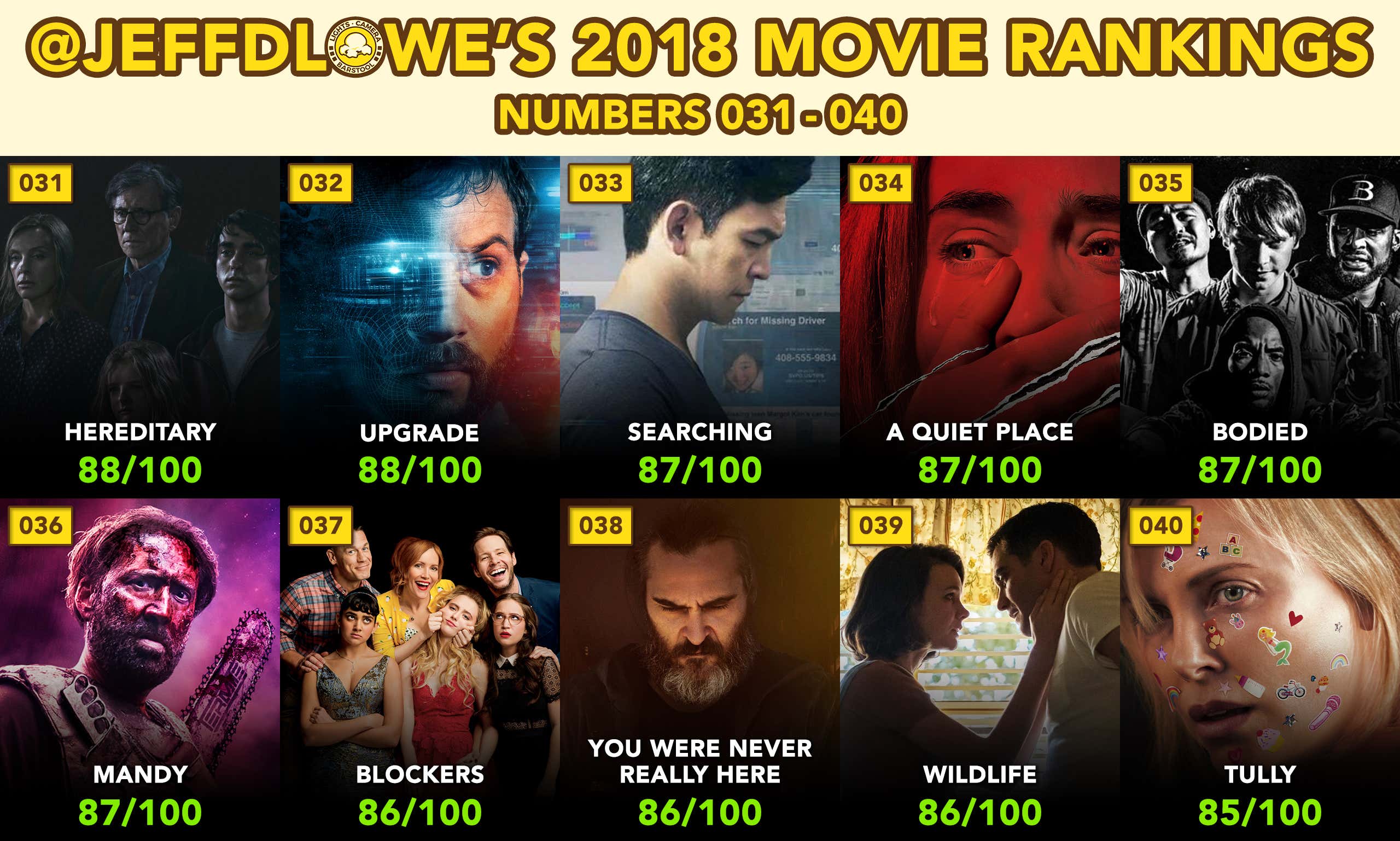 031-040: We are so close to talking about great movies, but, for now, we still get to discuss really good movies. The top two movies on this list are from two movie studios on fire right now: A24 and Blumhouse. ‘Hereditary’ was a creepy, original and unique horror movie from A24 that boasted one of the best acting performances of the year from Toni Collette. It’s disturbing, but in the sense that it remains intriguing and keeps you engaged. ‘Hereditary’ doesn’t rely on the classic horror tropes to keep you on the edge of your seat, which is enough to give it a good score for me, but it’s also just a really good movie on top of that. The other movie is ‘Upgrade’ and it was hands down one of the coolest movies of the year. The best way to describe the movie is that it is a high-tech action-thriller grindhouse movie with incredibly creative shots to display its fights and intense moments. I was blown away by how much I loved this movie, one I assumed would be a steaming pile of shit when I saw the trailer. Another creative movie on the list is ‘Searching’, which is played out mostly via a computer screen looking at the antagonist played by John Cho. This has been done before in the past, but not with the finesse that helps make this movie one of the best of the year. ‘A Quiet Place’ is without question a really good movie and one that leans on silence, which I always say is the scariest thing possible in a movie. I didn’t totally love the ending of the movie and that’s the difference between it being really, really good and great for me. ‘Mandy’ was an absurdly crazy and violent movie that worked so well due to one of Nic Cage’s best performances to date. ‘Tully’ and ‘You Were Never Really Here’ were deeply personal movies and roles for Charlize Theron and Joaquin Phoenix that deserve more recognition. The second best comedy I saw this year, and the best pure comedy was ‘Blockers’. Speaking of movies I assumed would be terrible, the trailer for ‘Blockers’ was not great. What we got was a comedy movie with a great message, fantastic cast chemistry and some of the best jokes in any movie from the last few years. The story of a grad student turned rap battler is a bit rough around the edges, but ‘Bodied’ is one of the more daring movies of the year. It’s in your face intense and over the top but plays its cards perfectly. Not many people have seen bodied, but if you like bold movies, this is one I’d very much recommend.

NOTE: Barstool’s own Adam (Rone) Ferrone is in ‘Bodied’ 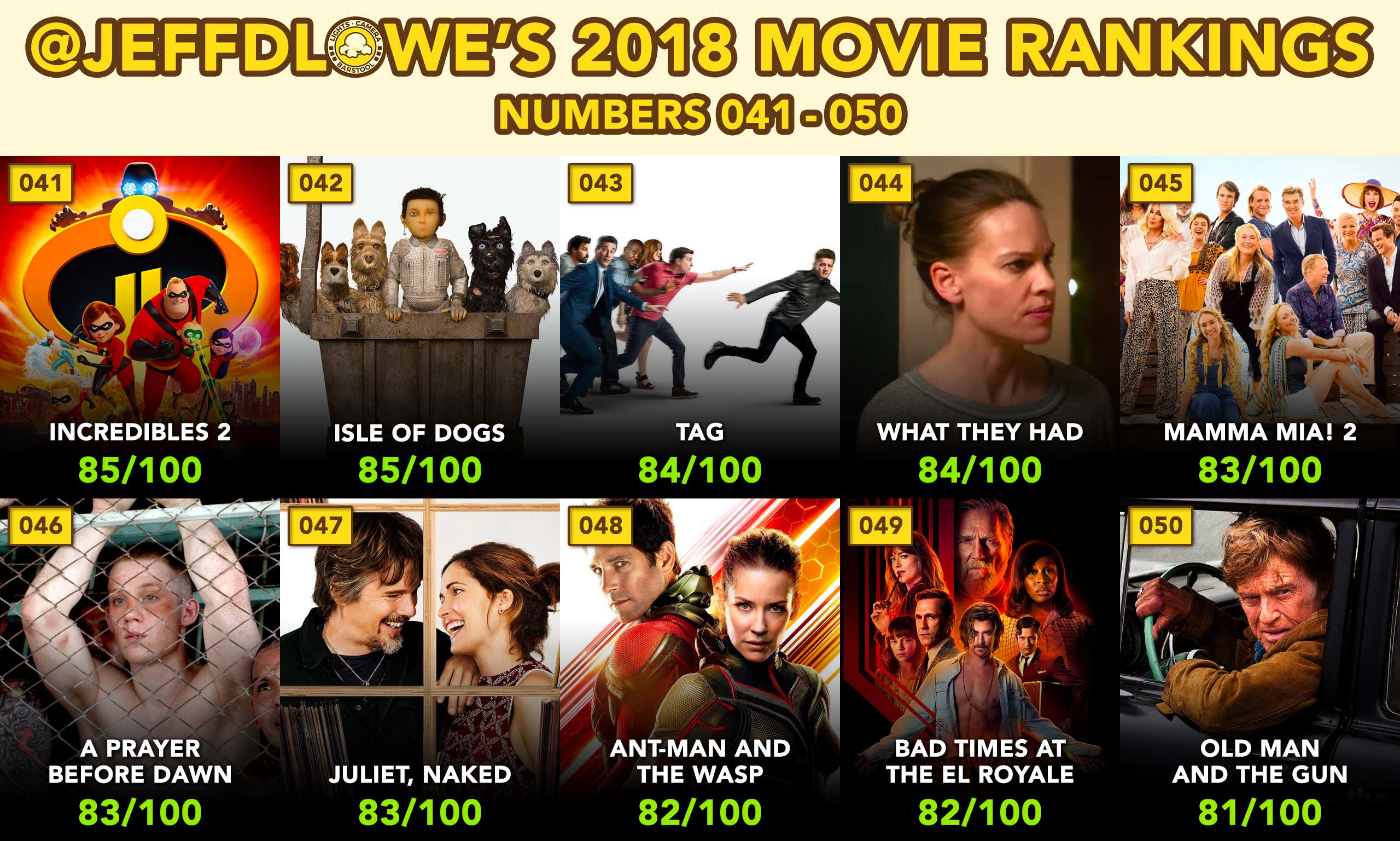 041-050: This group of ten movies is littered with blockbusters. Let’s start out with ‘Incredibles 2′, a movie I really liked, but a little less over time. Regardless, it has fantastic animation and the futuristic-yet-old “set pieces” in the universe add so many layers to the story. It was a follow up to the original worth waiting for, without question. I am a fan of Wes Anderson and while it might have been a touch on the boring side, ‘Isle of Dogs’ delivered mesmerizing animation and killer score. This movie might be lower for some people, but ‘Mamma Mia! Here We Go Again’ was one of my Top 10 favorite movies (there’s a difference between favorite and best) of the year. I am a sucker for a great musical and the songs ruled, the singing (and dancing) was great and, most of all, it was just a flat out better movie than the original. ‘Ant-Man and the Wasp’ had the tough task of being the third Marvel Cinematic Universe movie released following ‘Black Panther’ and directly following ‘Avengers: Infinity War’, two of the biggest movies release… ever… in the history of cinema. It was a blast of a movie but lacked a bit of depth where most Marvel movies have excelled in the last two years or so. With that said, the role is perfect for Paul Rudd and he has really made it his own. ‘Tag’ was one pace to be the best pure comedy of 2018 until it’s bizarrely dark ending and tonal shift. I get what they were trying to do, but it felt forced and stopped the movie dead for me. ‘Old Man & the Gun’ was a nice movie from the legendary Robert Redford but a bit forgettable. ‘Juliet, Naked’ was a simple movie, but was packed with plenty of laughs and was easy to connect to emotional. The duo of Ethan Hawke and Rose Byrne was very enjoyable and Hawke has put out a ton of great movies as of late. One movie I was very excited for this year was ‘Bad Times at the El Royale’ and it was a movie I liked a fair amount but felt it was plagued by sloppy story-telling. Flashbacks are fine, and needed, to tell a story, but the way they were interjected throughout in ‘Bad Times’ was jarring and held the movie back from being truly great.