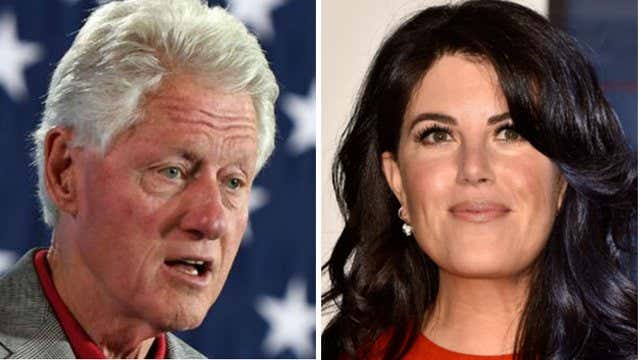 According to an excerpt from Sims’s book, “Team of Vipers,” which was obtained by The Washington Post before its publication, Trump told a TV anchor during a 2017 tour of the White House, “I’m told this is where Bill and Monica…” stopping himself completing his sentence.

Sims, according to the Post, wrote that three other people who have attended a tour with Trump said the president has made similar remarks about Clinton and Lewinsky. Sims wrote that Trump, following such comments, often laughs and makes facial expressions. Sims, citing aides, said the topic often leads to drawn out and often crass conversations.

I like to imagine this is true because having President Trump go around the White House like it’s an episode of MTV Cribs is hilarious.

“This,,,,,, this is where the magic happens. Believe me. Nobody knows more about magic than me.”

Next thing you know, you imagine Billy Clinton getting his CICock sucked on while he sits resolutely at the Resolute Desk.

It’s a story that you have to tell when you are giving a tour of the White House. You have no choice. It’s a must-tell story. What else are you gonna tell? Some bullshit about a legislative accomplishment or are we gonna get knee-deep into the cigar in the butthole talk? If the answer is law stuff, BOORRRRINNNGGGGG. Give me the BJ stories about WJC and JFK and give them to me PDQ.

Side note: the White House has gotta be a top destination place to get a blowie, right? No matter whom you are. Guy. Lady. You want your privates sucked on a little bit at the White House. It oozes power and pomp. Bucket listed updated.