A week ago I was alerted to Deadspin writer Tim Marchman, who was actively Tweeting out requests for dirt on Tom Brady regarding his supernatural athleticism at the age of 41. If memory serves, there was a minimum of four snarky Tweets suggesting Brady wasn’t moving in the pocket and throwing dimes because he doesn’t eat strawberries, the obvious implication being that he’s on PEDs and Deadspin wants to know which ones.

So I made a request. That all Pats fans and Stoolies reach out to Tim Marchman of Deadspin and help him out. Either by Tweeting or with his email, marchman@gizmodomedia.com. And offered my own helpful tip for him:

Here’s what I’m hearing about Brady. There’s a source at an “anti-aging” clinic in Indianapolis called the Guyer Institute where Brady and his wife were regular customers. The source said on a hidden camera interview that he was providing Brady with HGH. And just to cover his tracks, the drugs were being mailed to Brady’s wife. Who just so happened to be nursing twins, which makes her a pretty lousy candidate for performance enhancing drugs, but that excuse gave Brady cover because any time someone would ask about the source, he could hide behind his family’s “privacy.”

Now when the interview with this source was reported, a couple of hired goons working for the Brady family showed up at the house of the source’s parents asking questions. This guy’s mom and dad were under the impression that these guys were cops and felt intimidated and scared. So that’s worth looking into for sure.

And so on. You get the idea.

Then I got the above Tweet and looked into it. And sure enough, Tim Marchman of Deadspin has deleted all but a handful of his posts: 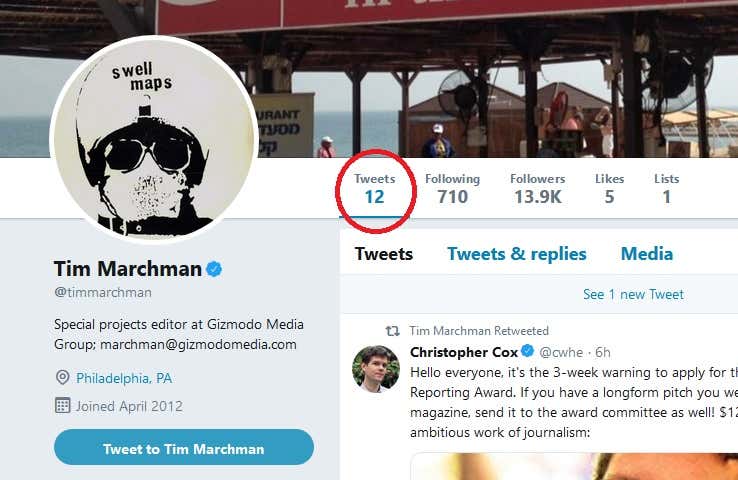 Holy Hell? Your aunt who signed up for Twitter five years ago to read celebrity gossip then forgot her login info has more than 12 Tweets. This is a guy who works media. Such as it is. What is going on with the underpaid drones in that smug, self-righteous, Chinese-factory-like media sweatshop that one of their downtrodden worker ants was forced to take down everything. See for yourself. He’s got two old Curt Schilling Tweets from 2016 and then nothing else until the last couple of days.

What could he possibly be hiding? What dark, shocking, twisted, forbidden opinions did he state on there – besides claiming Tom Brady is a cheating drug abuser – that are too grim for public consumption? Thousands of them, I presume. For example, believe it or not, I had Twitter Eggs this weekend accusing me of being too negative toward the Patriots [I pause for effect, in order to let that sink in] and sending me old Tweets I’d sent out in frustration in the middle of games when their defense was getting lit up. But there’s no way I’d delete those posts. I own those emotions as the price I pay for caring about the team more than any mentally healthy adult should.

The ironic thing is that a couple of months ago Deadspin tried to take me to Pit of Despair for deleting a 6-month-old blog I’d written about Reuben Foster’s charges being dropped because I knew they’d twist it into us advocating domestic violence. (Note: I don’t know if they ever ran a hit piece about it because I heard nothing from anyone. Not much sound comes out of that Gizmodo echo chamber.) So now one of their own has torn his social media house down to the foundation. It’s like rain on your wedding day.

We can only speculate as to what was so egregious that he had to hide it. Permanently. All we can do is look at the timing and assume Tim Marchman fucked with the wrong quarterback, the wrong fanbase and the wrong readership. I’m really looking forward to the Brady hatchet job when that comes out though.