Since 2006, I have been rating every movie I see throughout the year on a 0-100 scale. I have a methodology that I have laid out before and can put at the bottom of this post. Starting today, and lasting until January 31st, I will be counting down my 2018 movie rankings from number 205 all the way to the number one top spot! For the next two weeks, I will be doing two sets of movies per day and then finishing with 10 per day. Today’s rankings will cover movies 051 through 070. Enjoy! 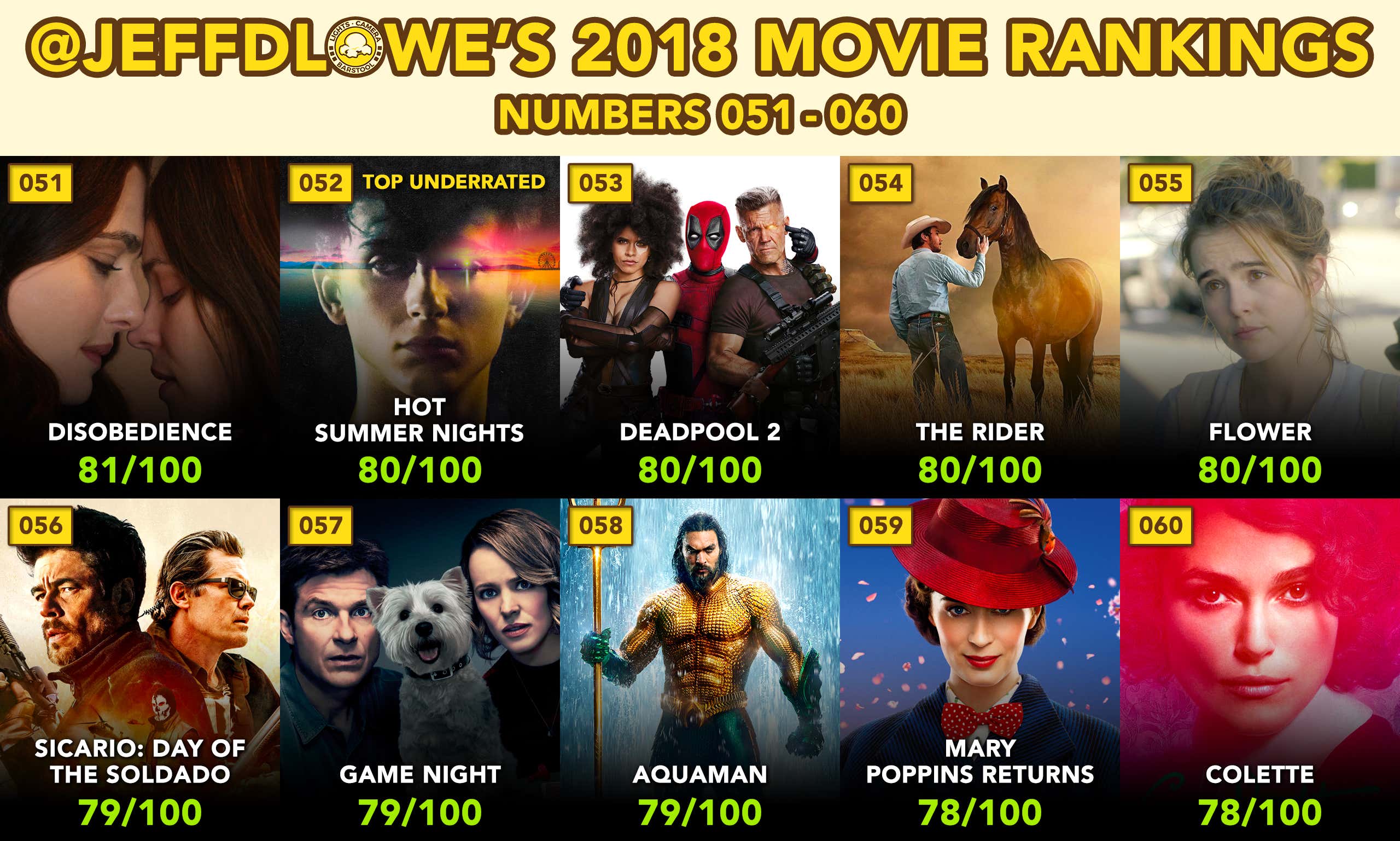 051-060: Welcome to the rankings, “good movies.” ‘Hot Summer Nights’ might be my pick for Most Underrated movie of the year. It’s a gorgeous looking movie about Timothee Chalamet’s character becoming a drug dealer and I really enjoyed it. Audiences and critics do not seem to agree with me. ‘Flower’ is another movie I differed on from audiences and critics, but I can’t help but stan Queen Zoey Deutch and King Tim Heidecker. Both ‘Deadpool 2′ and ‘Aquaman’ were solid comic book movies. I thought ‘Deadpool 2′ was a bit stale following how great the first one was, but everything, for the most part, hit its marks. ‘Aquaman’ was cheesy and not for everyone, but I loved James Wan’s take on the genre. With ‘Game Night’, I felt it lacked some humor in parts to raise it to the level of a “great’ comedy, but the cast’s chemistry, and performance by Jesse Plemmons helped it avoid the post-2010 comedy movie curse. ‘Sicario: Day of the Soldado’ received a lower mark from me than most people gave it, but it was just a worse version of its much better predecessor. Losing your world-class director and cinematographer obviously never helps. ‘Disobedience’, ‘The Rider’ (a movie I made fun of…) and ‘Colette’ were all better than I expected them to be. The last movie released on this list was ‘Mary Poppins Returns’ and it did a nice job but was mostly a decent movie due to the excellent performance by Emily Blunt. Had she not delivered one of the best acting jobs of the year, the movie might have been a dud. 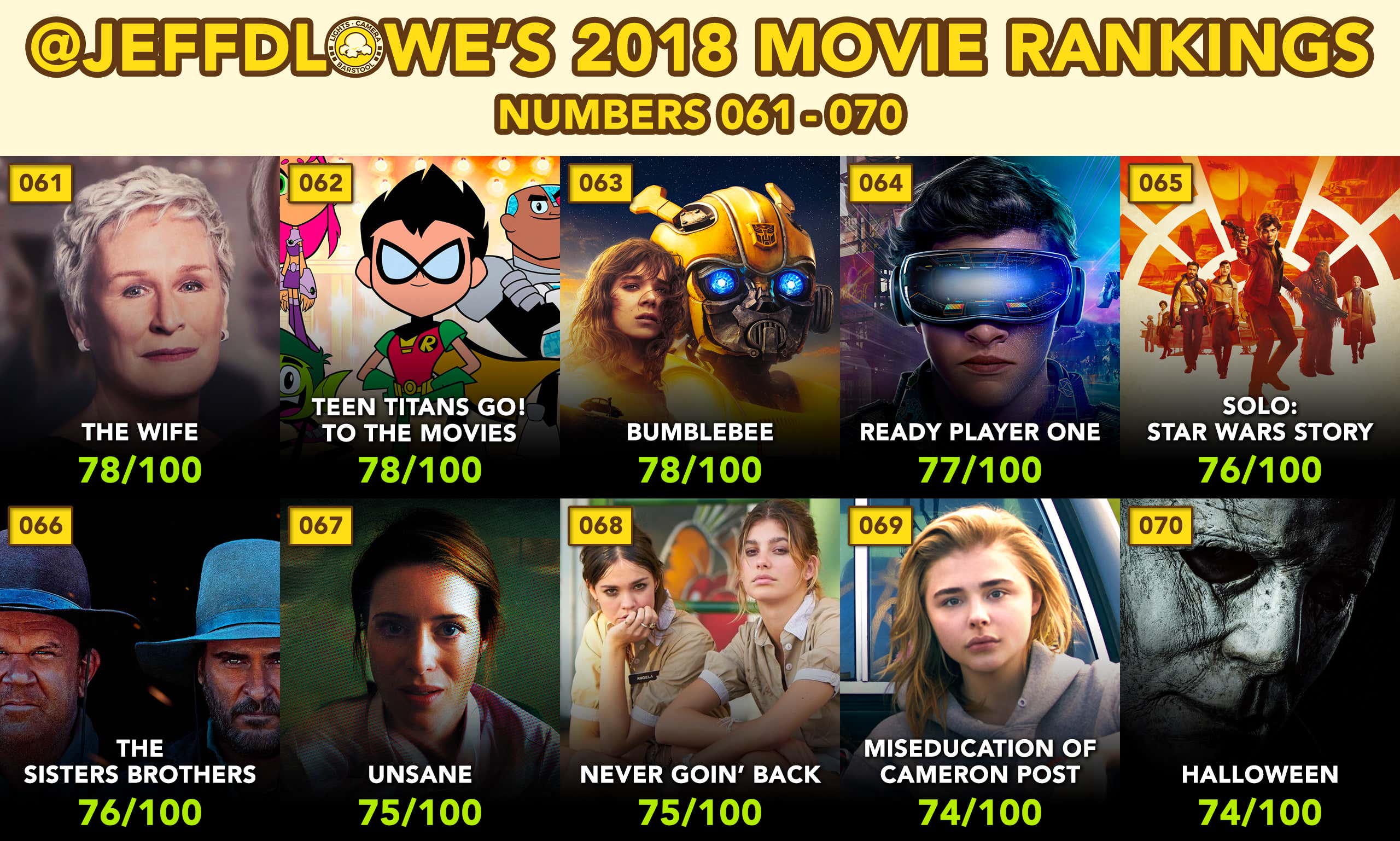 061-070: Hey look, it’s the movie that Glenn Close keeps winning awards for this year! ‘The Wife’ was fine on its own, but it is notable for the career-defining performance by Close. I am not sure I’d give her all of these awards personally, but I can’t complain, because she was very deserving. ‘The Miseducation of Cameron’ was another movie centered around gay conversion therapy and, while it was not one of the best movies of the year, it excelled in every area that ‘Boy Erased’ did not. I was pleasantly surprised by ‘Bumblebee’ and thought Travis Knight did a great job course-correcting a doomed Transformers franchise. Meanwhile, ‘Teen Titans Go! to the Movies’ was a well made, and funny, animated comic book movie, that eventually got lost in the discussion due to ‘Spider-Verse’. ‘Ready Player One’ was a super nerdy movie and maybe not for everyone, but it achieved everything Steven Spielberg and co. set out to do. Sigh… ‘Solo: A Star Wars Story’ had so much potential and did some great stuff in the process, but it was bogged down by franchise references even more than ‘Rogue One’ was a few years back. Just make new Star Wars stories! Stop relying on the past. ‘Halloween’ was a ho-hum reboot but much better than anything made in previous years, while ‘The Sisters Brothers’ paired the unlikely duo of Joaquin Phoenix and John C. Reilly for an uneven, yet wild, ride. Steven Soderbergh, creator of the 21st century ‘Ocean’s’ franchise, made ‘Unsane’ all with an iPhone, wasn’t totally my cup-of-tea, but a notable achievement (it is worth noting Sean Baker shot ‘Tangerine’ on an iPhone 5S a few years back) nonetheless. Camila Morrone and Maia Mitchell were a really fun duo in the enjoyable A24 experience of ‘Never Goin’ Back’.