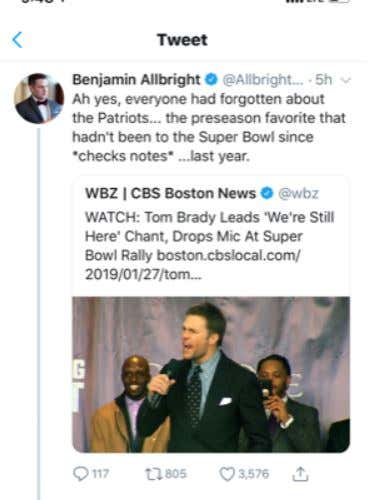 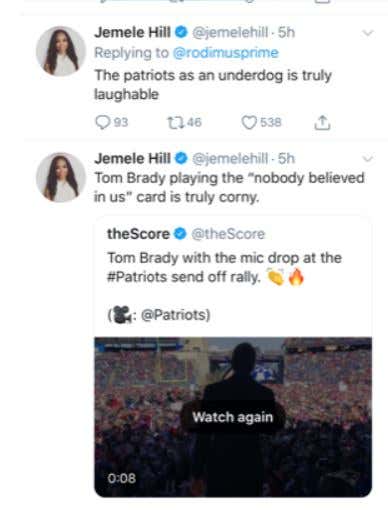 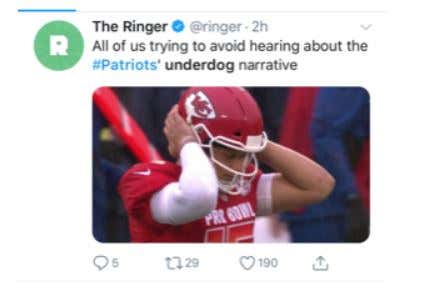 Is there a more insufferable group of people on the planet than Patriot haters? I mean you just can’t win with these people. They love to trash the Pats all season long and say how old and shitty we are. How team x,y or z is gonna kick our ass in the playoffs. How the mantle will get passed from Tom Brady to some new hotshot QB. That’s all we heard about all of November and December. And then these same exact people get mad when the pats jam their fists down their throats, rip out their spine and force them to eat crow. Now after the Pats have sewed their mouths shut they act like the Pats were never underdogs in the first place. Umm what planet am I on?

The bottom line is that every pundit, talking head and opposing fan said the Pats were dead this year. That we had no chance to get past the Chargers. That the Chiefs would beat us by 40. We were too old, too slow, etc. People making it sound like they would rather take Dak Prescott over Tom Brady as their Qb. We still had the longest odds to win the Super Bowl going into last weekend. So these people who are now acting outraged that the Pats are using the underdog shtick need to be thrown in prison. The Pats were underdogs by every metric possible.  I’m talking Vegas, Twitter, talking heads etc all predicted they’d lose and lose fast. In fact if the Pats pull this off I’d say this would go down as maybe the greatest underdog story since the last time we shocked the world vs the Rams.