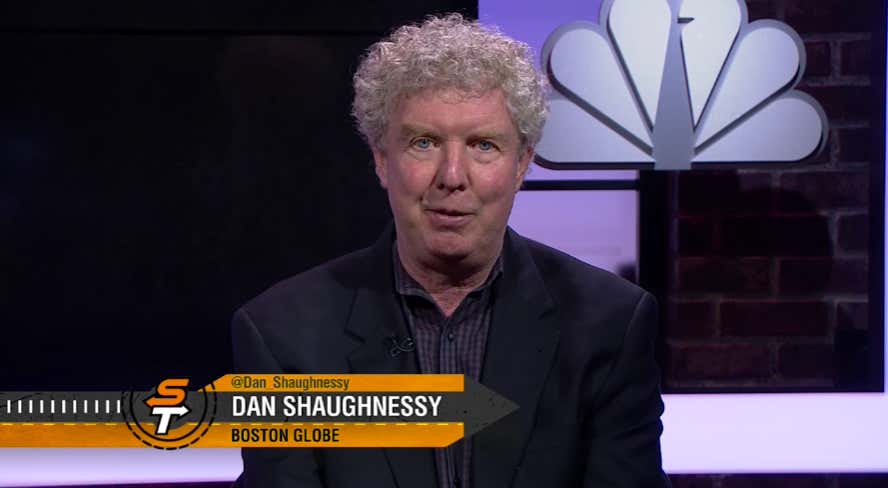 Dan Shaughnessy and Curt Schilling were put on this earth to hate each other. They hated each other long before the Hall of Fame debate was even a thing. For what it’s worth, I like them both. I didn’t like Dan so much at first, but we were able to bury the hatchet like gentlemen. However, that’s not going to stop me for calling out the way he has handled his approach to Hall of Fame voting, much like he called out the way that I cover baseball a couple of years ago. Fair is fair.

If you cite the character clause as a means to withhold your vote and said player hasn’t committed some sort of serious criminal offense, you are kind of an asshole. To Shaughnessy’s point, he’s not the only one to have done so, but those people are assholes, too. Schilling is a Hall of Famer. I don’t know what we’re talking about here.

Year after year, I watch pitchers go into the Hall of Fame who didn’t have better careers than Schilling. John Smoltz a couple of years ago, and both Mike Mussina and Roy Halladay this year. Not to take anything away from their accomplishments — all three of them are bonafide Hall of Famers in my mind — but the fact that they’re in Cooperstown and Schilling still sits on the ballot for what will be a seventh year makes little to no sense.

Here’s what Shaughnessy had to say on WEEI:

“Just so we’re clear: Yeah, I will allow that Curt’s character is not helping his cause with me,” Shaughnessy said. “He’s a bubble candidate, OK? I think that about 200 guys did not vote for him this year. Curt’s got to stop with this that it’s all because of his politics.”

“Schill is very much a bubble candidate, can we get that clear?” Shaughnessy said. “His win total is less than Jerry Reuss. His ERA is Dock Ellis. The second half of his career was way better than the first half of his career. Hey, he’s 11-2 in the postseason. I would’ve given him the ball ahead of (2019 inductee Mike) Mussina in a big game, we all know that. But (Luis) Tiant’s not in, (Catfish) Hunter’s not in. He’s not a slam dunk. This narrative now that the only reason he’s not in is because of his politics is BS.”

Shaughnessy allowed that maybe if Schilling “stood in a corner for a year” and stopped tweeting conspiracy theories, he might earn his vote back.

“I would like to see him behave better,” Shaughnessy said. “It’s menace-to-society material. The Hall of Fame is an honor. I’m not honoring a guy who’s on Q-Anon, who says Adam Jones is a racist, and who is advocating lynching journalists.”

Yeah, the lynching journalists thing was a very bad, ill-advised move. That’s like getting to the front of the line and then telling the bouncer that you fucked his wife as he’s checking your ID. Just not a whole lot of logic there. But the baseball writers putting Schilling on some sort of behavioral probation before they’ll make an accurate judgement on his BASEBALL career is fucking asinine. This isn’t the Good Guy Hall of Fame. It’s the Baseball Hall of Fame, which is littered with dudes who weren’t exactly the greatest role models.

Out of the 81 pitchers in the Hall of Fame, if Schilling were elected today, he would rank 14th in strikeouts (3,116), just one behind Bob Gibson, and his career WAR would be 25th, again just behind Gibson and right above Tom Glavine. Speaking of Gibson, his dominant 1968 season was one of the driving forces behind lowering the mound the following year. Per MLB.com, among the pitchers with at least 2,500 innings since Major League Baseball lowered the mound, Schilling ranks first in strikeouts to walks ratio (4.38), fourth in K/9 (8.6), fourth in WHIP (1.137), seventh in ERA+ (127), ninth in strikeouts, 10th in WAR (80.6), and 11th in FIP (3.23).

So, don’t tell me that there’s any other reason that these writers are withholding their vote for Schilling other than his politics and that he’s a loose cannon on Twitter. You take all of that away, and he’s a slam dunk Hall of Famer. There’s no “bubble” here. If you stick with the reasoning that you haven’t voted for Schilling partly due to baseball reasons, then you simply just do not know baseball. Dan’s smarter than that.