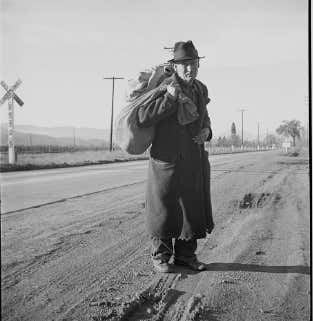 I think I like listening to them while I work because you can click over to the youtube page that’s open and see them standing and singing in front of an old truck, in an old cabin, or just on the side of the road. There’s a simpleness to their style that I find to be, as the French say, good.

In one of their videos, they talk about their life on the road and their love for hopping trains. As you can probably guess from their picture, ole Benjamin Tod likes some drugs from time to time which inspires his music. Nothing wrong with that. It gives him the edge that allows people to describe his music as bluegrass punk.

Take the video below for example. The old, shitty cabin that they are playing in used to be their home. They were essentially train-hoppin hobos for a while and I’m jealous as hell about that. That’s real love. Struggle begets love.

Can you imagine being free enough to fucking train hop with the love of your life? Just setting up fires by the railroad tracks and poppin open another can of delicious baked beans? You’d have the timing figured out for using an open flame to warm a can of beans like most folks do a bag of popcorn in a microwave. It would incredible. Your new hobo lady would come and sit by the fire with you. While you are plucking on the ole banjo, the beans are getting just right and so is the mood.

You have two wooden bowls inside your leather over-the-shoulder bag. You rinse them both out in the bubbling stream by your campsite. After taking the can of beans from the fire, you evenly divide the beans between your lady and yourself. She’s about to dig in but you stop her.

“Wait, my love. You forgot the special ingredient.”

You sprinkle a little brown sugar on the top of beans and her eyes light up like the skies of Bagdad during Shock and Awe.

Delicious. Protein filled and sustainable. That truly is the best part about beans.

You look at the train map and decide where you’ll be going over the next couple of weeks. Trains crisscross the country, and navigating the railroad becomes easier over time.

“Where would you like to head on these ole rails, my dear?”

“The only location I care about is your arms. If I’m there, I’m home,” she says while slipping off her handmade dress.

“Your pussy stinks. Can you wash it off first?”

Her pussy didnt stink. You just needed to rip ass because of the beans.

After making love, you put out the fire and go to sleep on nothing but a yoga mat.

“The beans,” she says softly as her eyes begin to close. “The beans.”