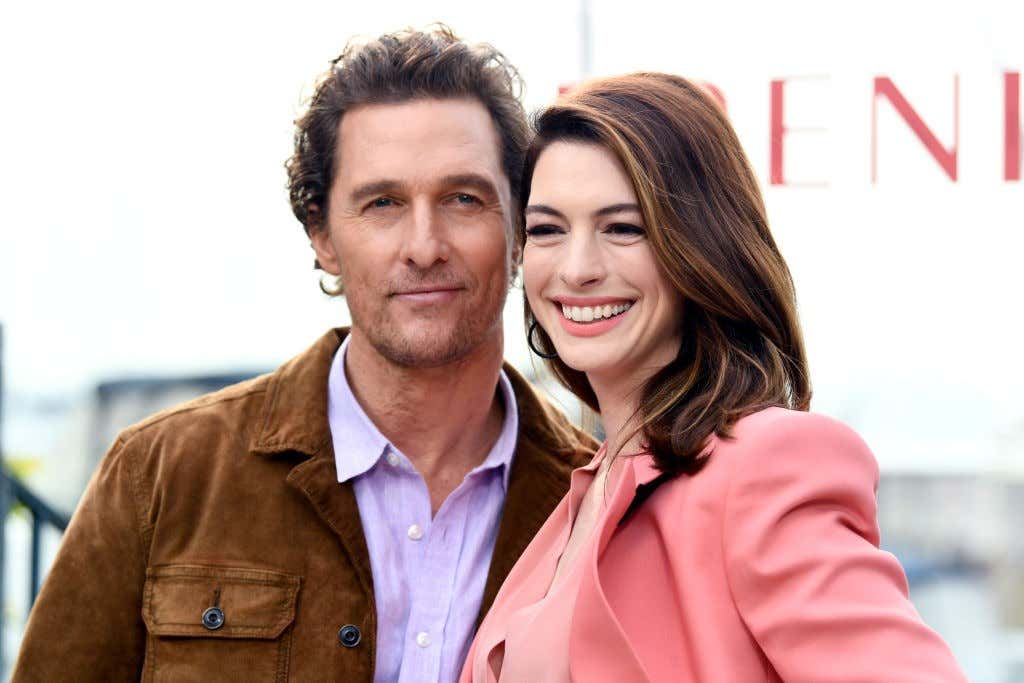 “Serenity” was filmed on Mauritius, an island off the eastern coast of Africa. As USA Today reports, while she was there, Hathaway and her co-star Matthew McConaughey visited some rum bars on the island, along with McConaughey’s wife, Camila Alves.

When DeGeneres asked how the rum bar tour went, Hathaway laughingly replied, “I don’t remember. I have no idea.”

Hathaway further explained, “They’re both cool, and I’m not, and I just can’t drink as much as them.”

The day after the rum tour, the Oscar-winning actress had to go to a meeting with “Serenity” director Steven Knight, and she said that she was “just kinda stumbling in with one eye open and I was trying to convince him about certain things about my character.”

After that experience, Hathaway revealed in October 2018 that she stopped drinking, and plans to continue to stay sober until her 2-year-old son, Johnathan, turns 18.

You know when you have a long night out drinking and you wake up with your head splitting in half? No amount of Advil can cure it. You can’t look into the light, you just have to sit in darkness until either your soul passes onto the afterlife or you snap out of it. That’s when you utter the world’s most popular exaggeration, “I’m never drinking again.” You know it’s not true, your friends know it’s not true, even your mother knows it. Flash forward to the next Friday and there you are at the bar doing it all over again. That’s basically describing four years of college.

Well, not when you drink with Matthew McConaughey. Nope, when you take on that challenge your liver incinerates. You thought drinking during pledging was a lot? Doesn’t hold a candle to a night out with the king. You’re probably sitting there three hours in incapable of forming sentences while McConaughey has just a slight buzz. He’s getting into intellectual conversations with everyone while you’re sitting there drooling out of your mouth. He orders a 12th round while you try to tap out before all your blood gets replaced with alcohol. He looks at you in disgust before changing the drink order from a single to a double.

After this night out with god himself, Hathaway announced she’s quitting drinking until 2036. 2036! That sounds no less than 100 years from now. We’re not making it to 2036, folks. If I do it’ll be a scientific miracle. I get it that she’s a mother and she feels weird being hungover around her kid, but that is just an impossible amount of time to go without a drink. I can’t even make it to Saturday.

I love how Ellen said this is why she doesn’t have kids. She’s the best.