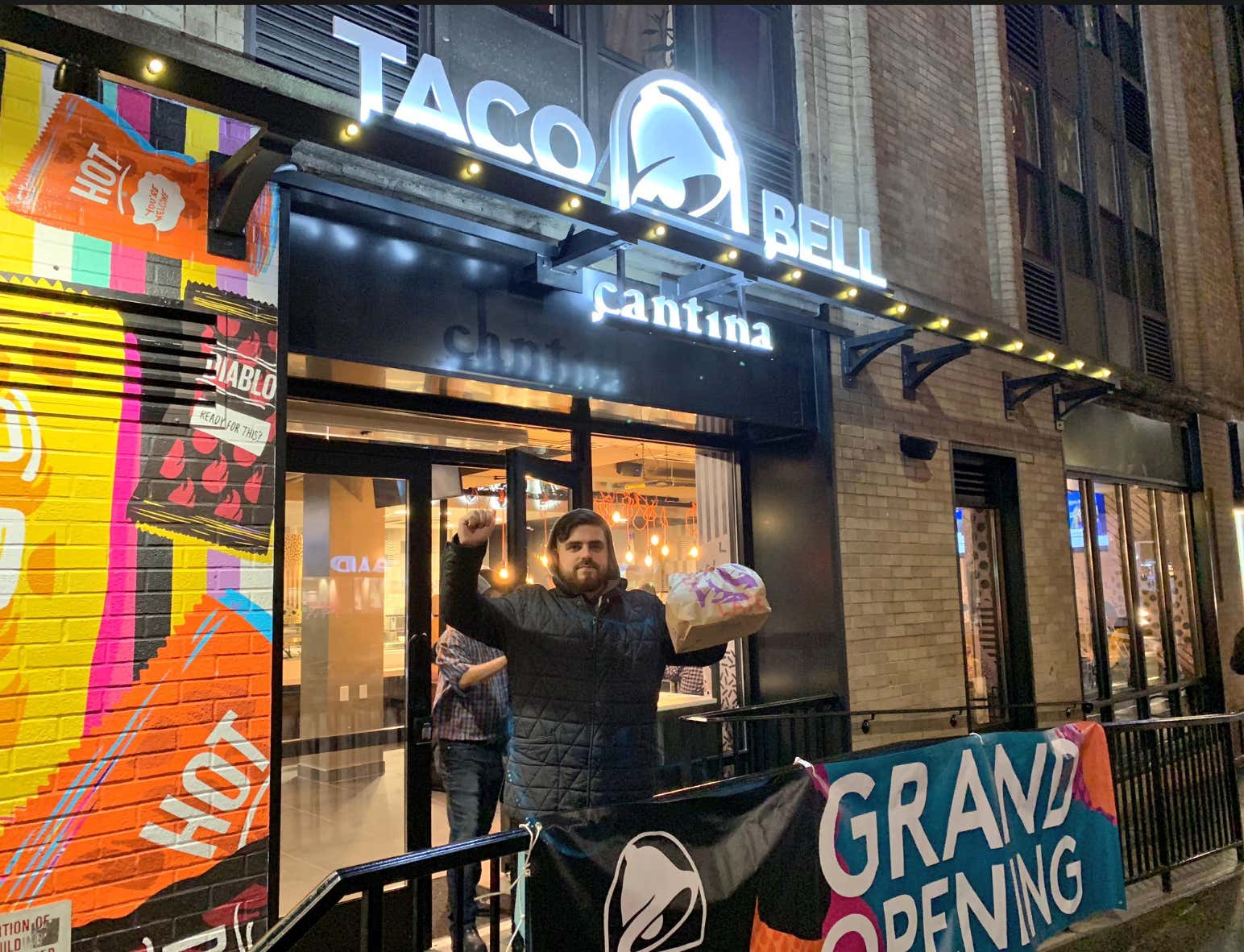 So every Thursday there’s a crew of us who eats Breakfast Crunch Wraps courtesy of JeffDLowe. He’s the King of Crunch Wrap, the Tycoon of Taco Bell. JeffDLowe loves the Taco Bell Cantina more than you love your own mother. And there’s a Taco Bell Troupe at work comprised of Me, YP, Bob Fox, Devlin, Glenny, and KenJac. We all Venmo him money and he comes through every Thursday and leaves a BCW on my desk. Every Thursday morning I forget about it and then I arrive at my desk and its a pleasant surprise sitting there waiting for me and it absolutely makes my day. My shit goes 0 to 100. My day completely brightens. All my problems disappear. (Just kidding, none of my problems are disappearing but that breakfast wrap is fucking FIRE) And my whole mood shifts.

Well today I actually remembered it was Taco Bell Thursday. Its all I could think about. Its fucking pouring rain. A January Nor’easter butt fucking this entire city and turning it into a cold, crowded, sloppy, awful slum. But I remembered as soon as I get to the train that I had a scrumptious wrap of eggs, sausage, hash browns, and their delicious jalapeno sauce waiting for me at work. Suddenly the rain stopped bothering me. The slow moving crowds who, for some fucking reason, grind to a halt because of precipitation didnt matter. I have to go to therapy at 11am because everyone tells me my life is so fucked up I “need to talk to someone”…I fucking hate therapy…but after a Crunch Wrap I wouldnt even care about that shit. Its like sleeping in a Holiday Inn Express. You can do anything after a BCW.

Anyway I walk in and I see my desk is empty. No Crunchwrap. I look over to JeffDLowe’s desk. Empty. No JeffDLowe. I figured maybe he was just coming in late today. I suppose I could wait.

Trent tells me he’s got fucking food poisoning. Food poisoning. What a crock of shit (probably literally) that is. Theres no fucking chance JDL has food poisoning. Hey Asshole! We eat Taco Bell VERY regularly! Our stomachs are made of iron by now. I dont know the real reason why that son of a bitch is out but I dont care. When you have people counting on you for your T Bell, you have to fulfill your duties. At the VERY LEAST you have to inform us that Taco Bell Thursday has been canceled. With great power comes great responsibility…and JeffDLowe is the King of Taco Bell here. He might be a rung above the Heir to The Outside-The-Box-Throne, Hen Easy. Nobody forced this upon you, Jeff. Nobody appointed you Breakfast Crunch Wrap Distributor. You took that role on yourself. You wanted that. We just gladly Venmo and ride the wave.

And after like months and months of this, you’re now legally obligated. Its like a Common Law Marriage. After such an extended period of time, certain things become official. Certain things become expected. And just leaving 7 people hanging, Taco Bell-less, is the worst thing someone can do to another person in a marriage. Trust me, I should know.

So the question is, what should JeffDLowe’s punishment be for failing to comply with TBT expectations and failing to deliver on his duties? Death? Should we shove Taco Bell down his throat until hes fucking dead? Should we make that germaphobe eat a crunch wrap off the subway floor? Hopefully he gets that Super Gonorrhea  or something like that. Maybe perhaps we should just make him get us Taco Bell tomorrow morning and we’ll just have Taco Bell Friday? That one seems the most logical but also feels like hes getting off pretty light. Either way I just hope JeffDLowe now realizes he joins me on the list of most unreliable life partners at Barstool Sports. JeffDLowe and the D stands for fucking DEVASTATED you son of a bitch.