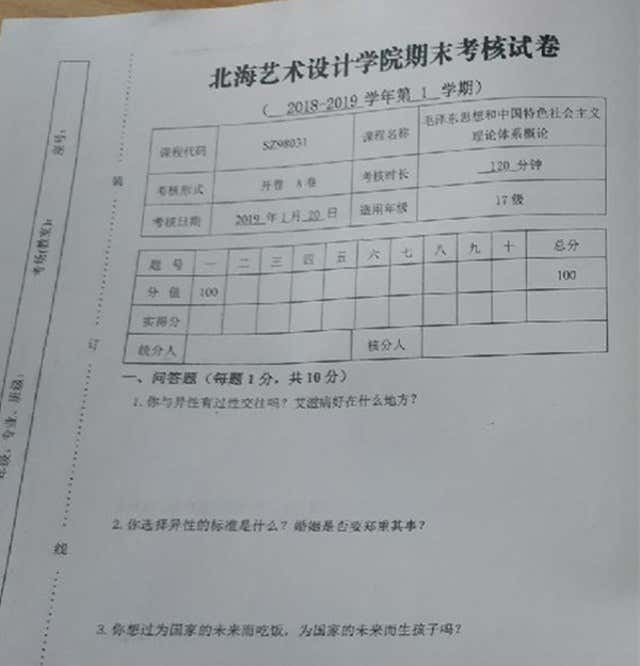 Recently, students at a Guangxi university were asked some rather bizarre and invasive exam questions that would appear to have little to do with the subject of their course, Mao Zedong Thought and Socialism with Chinese Characteristics.

The exam, given to students of the compulsory course at the Beihai College of Art and Design, included questions like “Have you had sex with someone of the opposite gender?” “Do you want to have children for the future of the country?” and “Why are people who spend all day playing games fools?”

However, the very first question has farthest raised eyebrows. It reads: “What are the advantages of AIDS?”

Guangxi education authorities are now conducting an investigation into this latest incident. The school has said that the exam prepared by Zheng was not the students’ final exam but a “bonus” test. Meanwhile, students have reportedly been asked to delete their posts about the exam and keep quiet regarding the issue.”

Wowzers! Now that’s a tough open-ended question. Sure those students would have killed for some multiple choice action on that one. I personally wouldn’t touch a question like that with a 10 ft pole (I would touch someone with AIDS though. My elementary school health classes made sure to hammer in the fact that you can’t catch AIDS by holding hands).   This appears to just be the case of a deranged professor as I looked up this guy “Zheng” who administered the test and apparently he has made headlines in China previously for asking his students exam questions such as “”Do girls know that all men care about are female bodies?” and “Will women over 40 be sexually assaulted?”

Not everyone thought this question was too difficult though. Take Zhaojing Li for instance, who responded to this article on facebook.

Oooo I get it now. Without AIDS people wouldn’t take safe sex seriously. Gonorrhoea and chlamydia are treatable. Herpes is for life but over a quarter of people in NYC have it so it can’t be that bad. But AIDS? Ya AIDS will kill you if you’re not filthy rich. You’re right Zhaojing, nothing bizarre about that question at all.