Since 2006, I have been rating every movie I see throughout the year on a 0-100 scale. I have a methodology that I have laid out before and can put at the bottom of this post. Starting today, and lasting until January 31st, I will be counting down my 2018 movie rankings from number 205 all the way to the number one top spot! For the next two weeks, I will be doing two sets of movies per day and then finishing with 10 per day. Today’s rankings will cover movies 111 through 130. Enjoy! 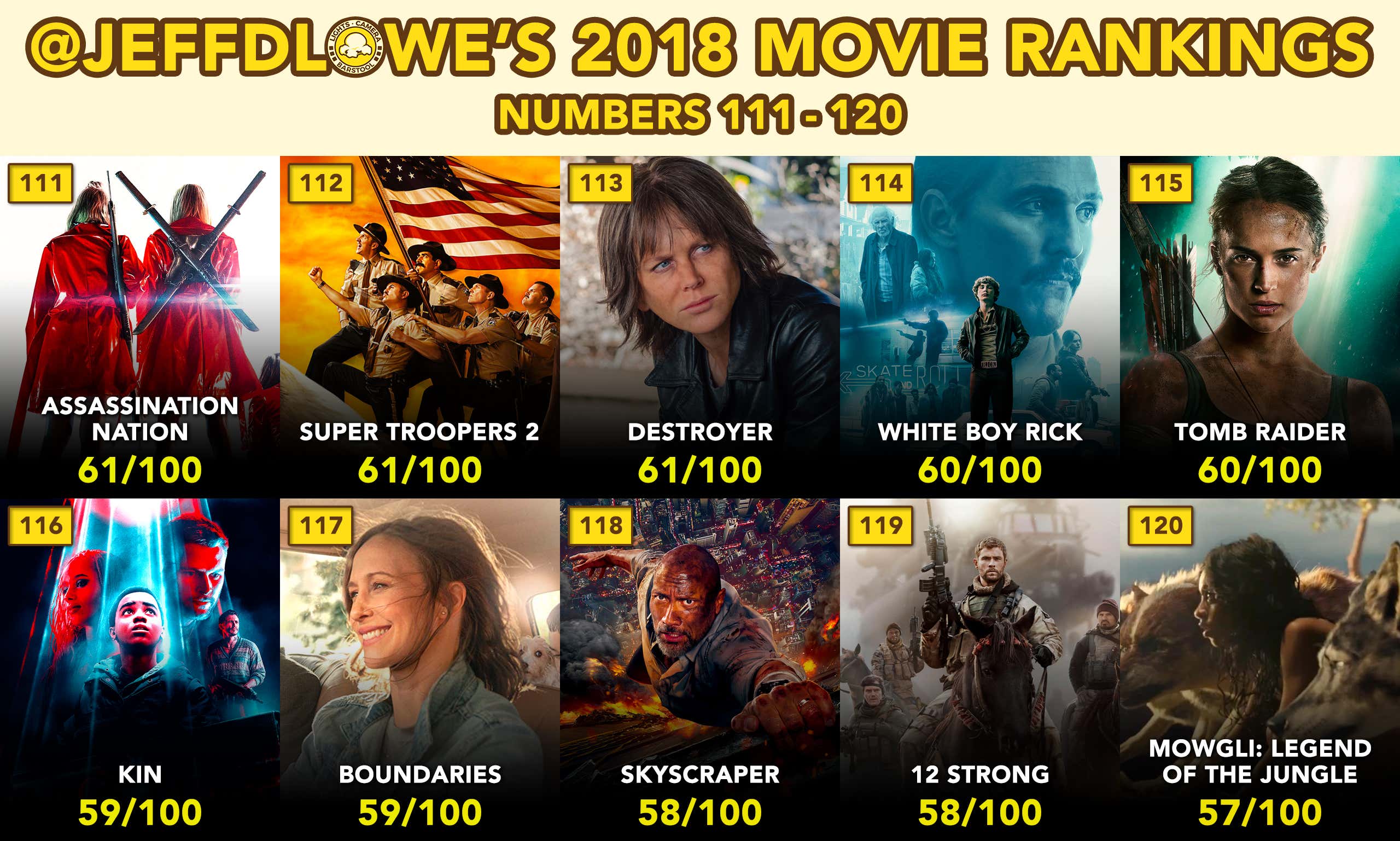 111-120: Ah, look, the movies are starting to improve! To be Officially Buttered by Lights, Camera, Barstool, you need a rating of 69/100 or above. We aren’t quite there yet, but we are reaching the territory where all movies are, for the most part, watchable. Two blockbusters, ‘Tomb Raider’ and ‘Skyscraper’ stick out the most on this list. I am a big fan of Alicia Vikander, so I didn’t really hate ‘Tomb Raider’, but the action isn’t all that great and the script seriously holds back the Academy Award winner’s performance. Even with all of that said, it is still one of the best comic book movies ever made. When it comes to ‘Skyscraper’, you get a great looking movie with some decent suspense, but you also get an overwhelming sense of “more of the same” with Dwayne Johnson. ‘Destroyer’ is one of a few movies this year that boasts an Oscar-worthy performance, this time from Nicole Kidman, but gets lost within a movie that no one will really remember. It’s unfortunate because Kidman truly gives the audience one of the best performances of her career. ‘Super Troopers 2′ was just a less funny version of the original movie and ‘Mowgli’ was badly hurt by the fact a better ‘Jungle Book’ movie came out just a few years ago. The animation and motion capture decision to make the animals’ faces look like the actors was fucking bizarre and distracting. Credit to Andy Serkis for going after his vision, but ‘Mowgli’ was too dark and not engaging enough to live up to the original and live-action reboot. 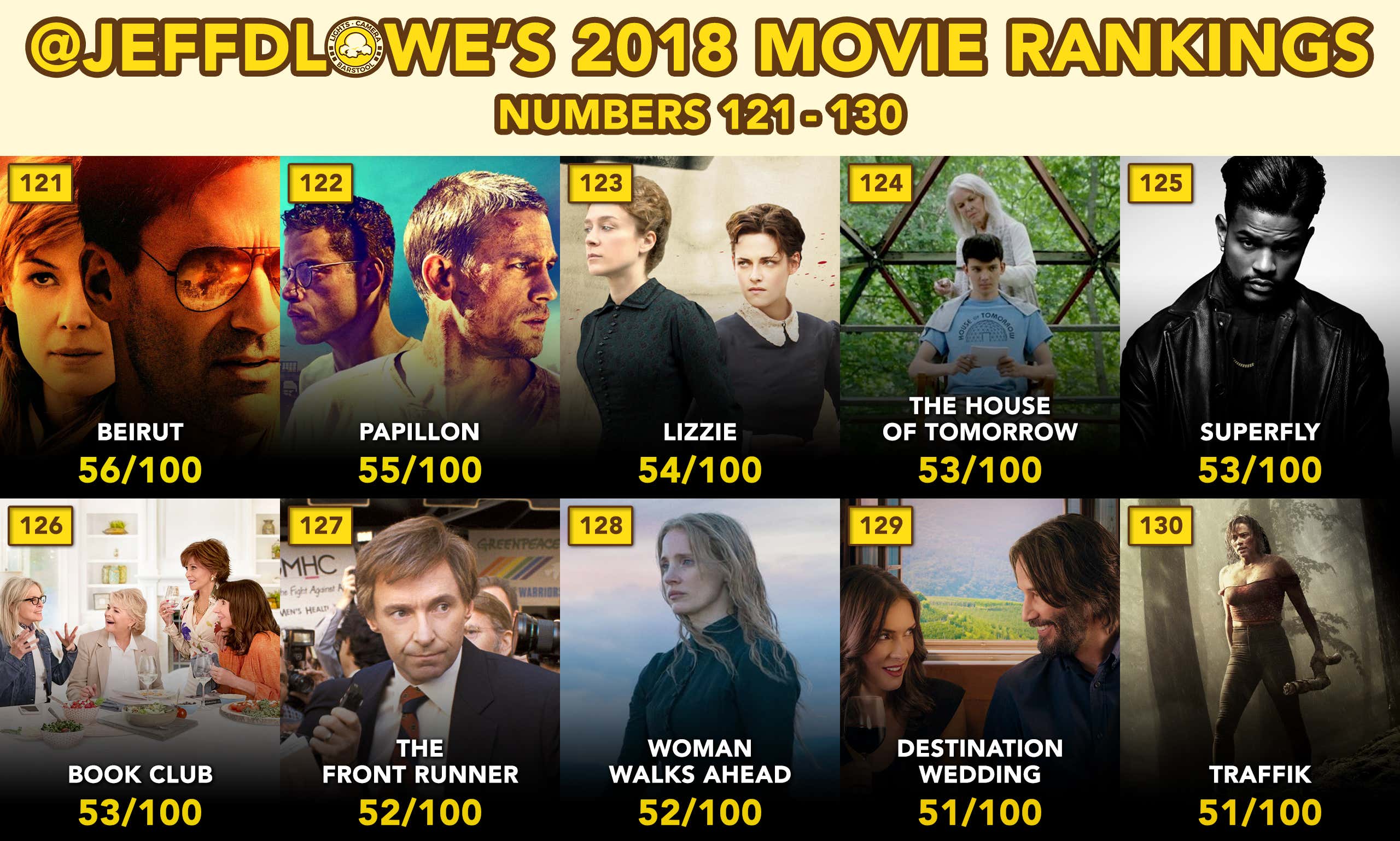 121-130: None of these movies really stood out to me in this group of ten. They were fine, at times, but mostly didn’t move the needle whatsoever. The Kristen Stewart Lizzie Borden movie, ‘Lizzie’, sort of flatlined from start to finish and the same can be said for ‘The Front Runner’. Based on a true political story, ‘The Front Runner’ didn’t work for me in large due to the fact the role felt awkward for Hugh Jackman. He wasn’t terrible, but the whole time it felt like I was just simply watching Hugh Jackman. The director of the movie was actually Jason Reitman, who will be leading the charge with the upcoming ‘Ghostbusters’ sequel-reboot. ‘Beirut’ is one of three movies this year for Rosamund Pike where the story is set somewhere in Africa or the Middle East. Do you want a moment from this group that will (literally) stick out at you? How about the Craig T. Nelson boner scene from ‘Book Club’. What a fine moment.