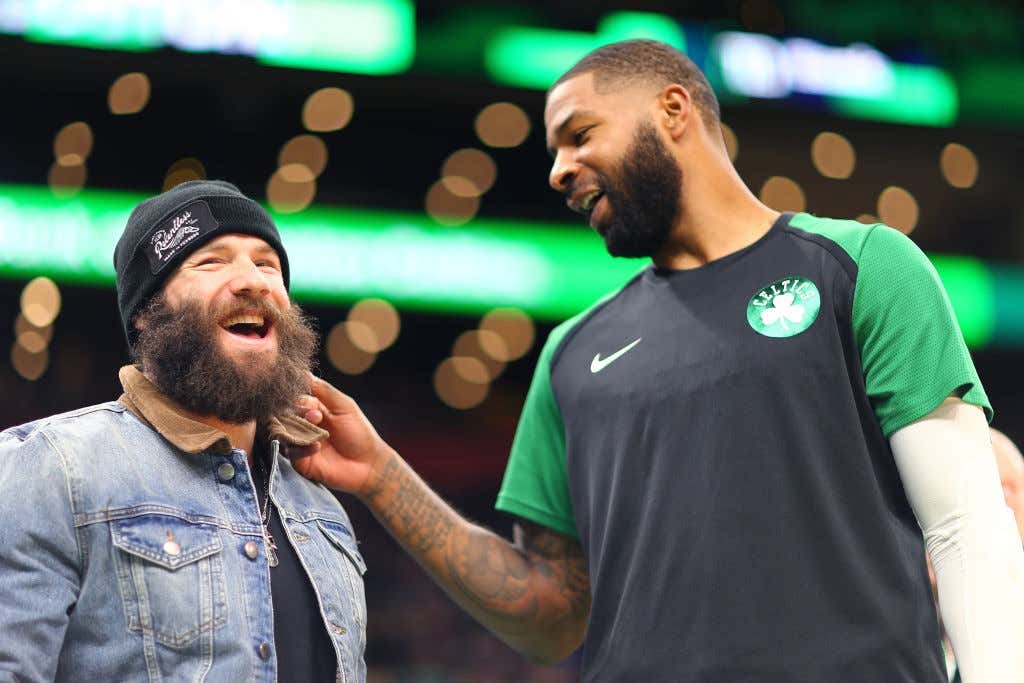 Maybe you’ve heard, but the Patriots are heading back to the Super Bowl. There’s a very good chance they win that game, not only giving Brady his 6th ring, but also the city of Boston their second title in a row in terms of the four major sports. Perhaps you forgot, but this also happened earlier this year

I know Dave has talked about this on the Rundown and everything, but let me make myself perfectly clear. If the Patriots win in two weeks, there is no way, I mean no way that the Celtics can be the ones to end the title streak. I’m not exactly a hockey guy, I couldn’t explain icing to you if you gave me 100 tries, so I won’t comment on the Bruins chances. No clue how they stack up among other contenders, I just know in that sport you get into the playoffs and you get a hot goalie, next thing you know you’re hoisting the Stanley Cup. Doesn’t matter what seed you are I feel like, once you get into the dance anything can happen.

That is not the case with basketball. Because of that I think it’s OK to say that of the 4 teams the Celtics have the lowest title odds. Not only have they played mostly like dogshit and been wildly inconsistent, they may also have a pretty tough road to even get to the Finals. If they end up the 4 seed or something like that, they’re going to have to go on the road and win two playoff series without homecourt, something they haven’t really shown to be all that good at so far. Can they catch MIL and snag the 2 spot? Maybe, but something crazy would have to happen. All I know is I will not be able to sleep at night if the Red Sox, Patriots, and Bruins all win titles and it’s the Celtics, the one team that everyone thought might actually be contenders this year, be the lone loser out of the bunch. I can’t have that.

As of now, the Celtics have the 3rd best title odds in the league at 8/1. Vegas believes in them so I believe in them. Why should you think they even have a chance? Well, the Celtics currently own the 2nd best point differential in the East. If you look back all the way to the 2002-03 season, there were only like 2 instances where a top 2 point differential team didn’t make the Finals, and one of those was last year with a team that had LeBron. There is no LeBron this time around, and that’s not my homerism spin talking, that’s science. You finish with a top 2 point differential in your conference you historically have a great chance of making the Finals. In terms of overall Net Rating the Celtics find themselves 3rd, not just in the East, but the entire NBA so that’s pretty great as well. I don’t have to tell you the history of teams that have a top net rating, you get the idea.

The problem is, even if the Celtics pull off a miracle and get to the Finals, they’re going up against perhaps the toughest opponent of any of the Big 4 sports. No team is as terrifying as the Warriors from top to bottom, they’d be the heavy favorites and for good reason. How sick am I though? I look at this matchup and I see two teams that are 3-3 against each other in their last 6 meetings. I see a team that has 2 of those 3 wins on the road in Oracle where almost nobody wins. And yes, the Celtics roster is drastically different from those Isaiah teams, but they also have a Warriors killer in Kyrie Irving. We’ve seen him do it against this GS team before, now he has more talent (minus LeBron which is important but just go with it). That’s why I can’t wait to see how these teams look against each other for the first time on Saturday. If the Celtics win that game who knows where my mind will take me.

I just know this. I don’t want, I need a title sweep across all the Big 4 sports. The Red Sox got us started, the Pats are living up to their expectations and got to the championship game, the Bruins can get hot and go on a run because that’s hockey, so the pressure is absolutely the fuck on when it comes to the Celtics. You may have thought there was pressure before given their roster and the hype surrounding them heading into the season, but frankly we just kicked it up a notch.

I’ll never forgive them if they are the only ones to end the year ringless. They have the hardest road for sure, but that’s no excuse. We don’t make excuses we win championships, period. Please do not blow this Celtics, do you hear me? I beg of you.