I put together some of the statistics on this, so let’s take a look. 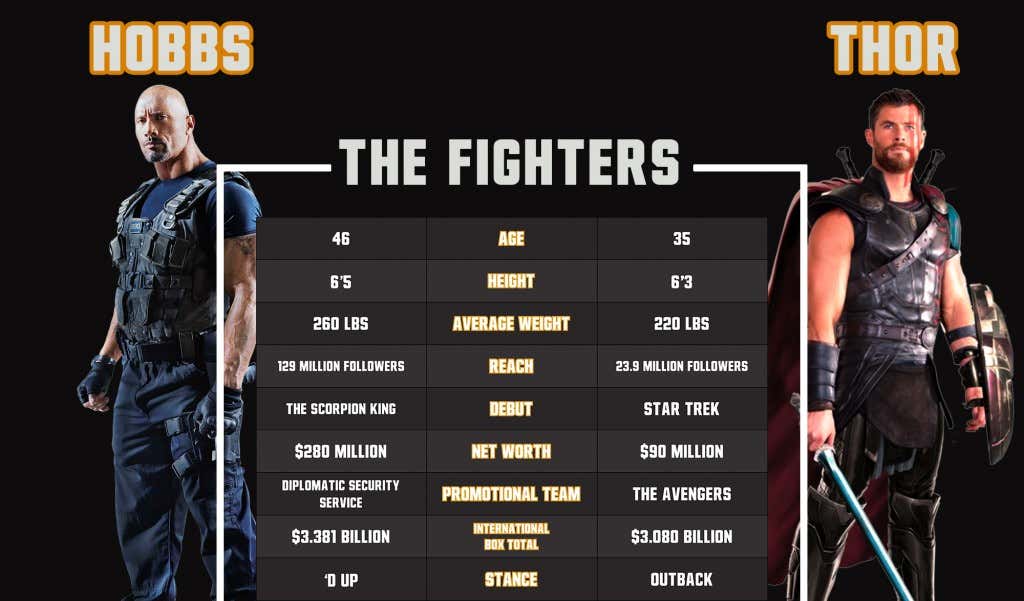 I’m not sure if DJ knows what he is getting into here, but this is what I think some of the preconditions for the fight would be.

1. Chris Hemsworth (Thor) can’t use any of his supernatural powers or weapons. Think of his limitations form ‘Thor’ (2010)

2. DJ (Hobbs) cant use a car and none of his family can help him out

DJ has advantages in height and weight, but they’re a push in wingspan and Thor has the benefit of youth on his side. I think Thor takes it in this bare-knuckle brawl for one big reason and it’s Hobbs fight history. If Hobbs can get fought to a standstill by Dom (Vin Diesel) who is 16 years Hemsworth’s senior, 3 inches shorter and roughly the same weight, I think Thor can take him. My prediction: Hobbs burns up his energy in the beginning of the fight, setting up Thor for a peoples elbow following a devastating rock bottom. Thor rolls out, jumps up and gets Hobbs with an Asgard Leg Drop followed by the Mjolner clutch to make him tap out. HOWEVER, I’m no fight analyst, so I called a buddy of mine who is.

Robbie Fox: This is a tough call for me, personally, because of my deep-rooted fandom for The Rock, going back as far as I could remember (from his WWF/WWE days), and my more newfound loyalty to Thor and the rest of the earth’s mightiest heroes. It’s also tough on a whole ‘nother level, being the only Fast and Furious movie I’ve ever seen is the third one, ‘Tokyo Drift’, which A) does not feature The Rock as Hobbs, and B) is allegedly the worst, by far of the franchise. I dug it, to be honest, but it’s been so long since I’ve seen it that it could definitely be the piece of shit it’s been made out to be.

What it really comes down to for me, though, is this: Thor is the God of Thunder, right? When you take away his supernatural abilities, he’s unable to work with the electricity he’s had in him all his life. The Rock, though, has never needed supernatural abilities for electricity to pulse through his veins, and by using THE Most Electrifying Move in Sports Entertainment, THE PEOPLE’S ELBOW, followed by a Rock Bottom…I think he puts the Son of Odin’s Candy Ass down for a count of three.

Sorry, Thor. I just can’t doubt the man who’s dug deep and defeated the likes of “Stone Cold” Steve Austin, Hulk Hogan, and John Cena ALL on the Grandest Stage of Them All, WrestleMania. Not right after you blew it in NOT aiming for the head when it mattered most.