Since 2006, I have been rating every movie I see throughout the year on a 0-100 scale. I have a methodology that I have laid out before and can put at the bottom of this post. Starting today, and lasting until January 31st, I will be counting down my 2018 movie rankings from number 205 all the way to the number one top spot! For the next two weeks, I will be doing two sets of movies per day and then finishing with 10 per day. Today’s rankings will cover movies 131 through 150. Enjoy! 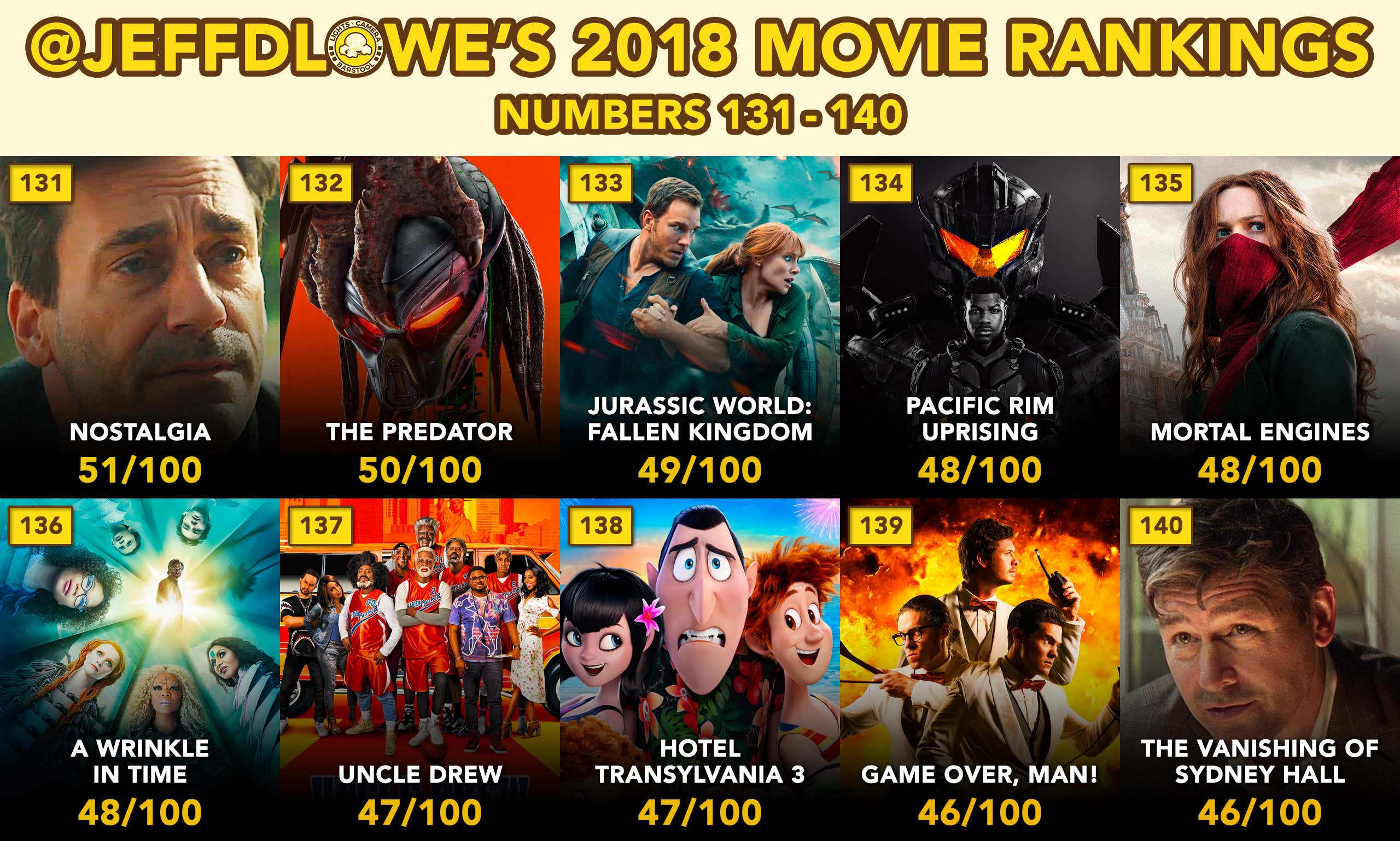 131-140: This group of ten movies is jam-packed with big blockbuster releases! No offense to anyone involved, but fuck ‘Jurassic World: Fallen Kingdom’. The story and plot for this sequel were some of the worst out of any movie released this year. A hybrid dinosaur you activate by pointing a gun at someone instead of just shooting the gun? Uh, okay. A cloned girl who lets the dinosaurs out free into the world for a nonsense reason after the final battle? Dumb. ‘Fallen Kingdom’ was easily one of the most frustrating big blockbuster releases I have seen in quite some time and a continued waste of Chris Pratt. ‘Pacific Rim Uprising’ was a disappointing sequel, but that came with no surprise after Guillermo del Toro didn’t return as the director. I was surprised ‘Mortal Engines‘, a huge box office bomb, wasn’t as bad as I was expecting, but the steam-punk mess was incredibly forgettable. ‘Uncle Drew’ was, at times, enjoyable, but still, it’s a movie based off of a Pepsi commercial and ‘Game Over Man’ was basically a really bad episode of ‘Workaholics’ with only a few funny scenes or jokes. ‘The Predator’ was another movie that didn’t turn out as bad as I had expected it to be, but an incredibly stupid story (stop making kids plot devices and heroes in action movies) and rough CGI really knocked it down a bunch of pegs. The year was a good one for Disney, but I have to think the movie they’re most disappointed over remains ‘A Wrinkle In Time’. With Ava DuVernay directing and a cast of Chris Pine, Oprah, Mindy Kaling, Reese Witherspoon, and Zach Galifianakis, the Mouse was expecting this movie to take off and become a game changer in 2018. It came and went with a pretty big whimper, making only $132,675,864 at the box office off of a rumored $100 to $130 million budget. Y-I-K-E-S. ‘Wrinkle In Time’ looks amazing and carries a great message of empowerment, but the story is over-stuffed and clunky, which made it pretty much dead on arrival, especially considering the target audience. 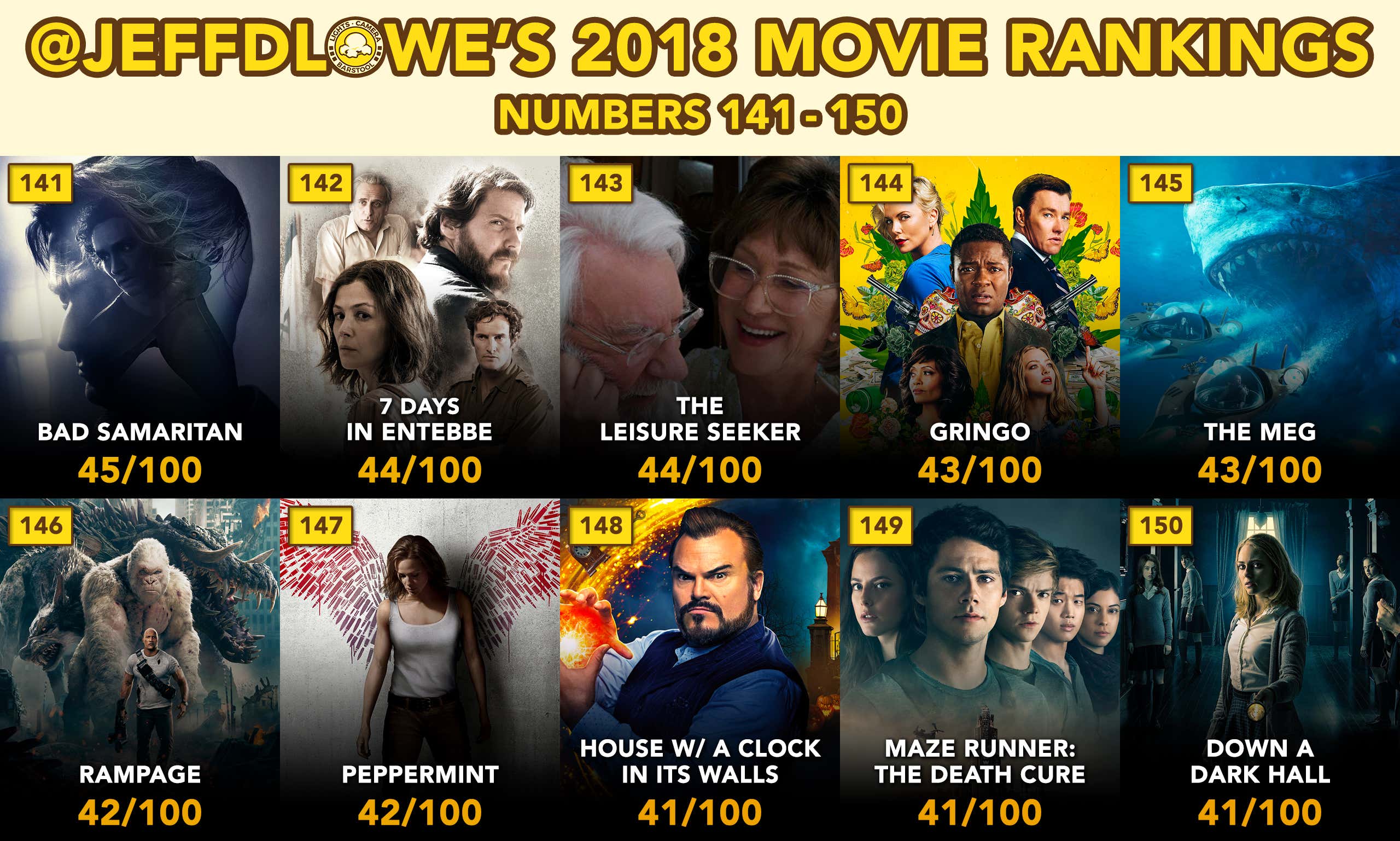 141-150: Two major blockbuster releases grace this list in ‘Rampage’ and ‘The Meg’. Both movies were pretty similar in terms of what they offered and the final product on screen. You had big monsters and a big action star from the ‘Fast and Furious’ franchise in the lead role. It’s safe to say both were pretty stupid movies and had weak story-telling elements, but the action was just serviceable enough to qualify them both as “watchable.” They were about what I expected when I went into the theater to see them. On the other hand, two movies that let me down were ‘7 Days In Entebbe’ and ‘Gringo’. Each movie boasted a cast of very good actors and actresses, including Rosamund Pike, Daniel Brühl, Charlize Theron, Amanda Seyfried, David Oyelowo, Thandie Newton and Joel Edgerton. These movies were nothing short of a letdown, despite some entertaining elements. The ideas on screen were intriguing, but the execution was poor. I wouldn’t suggest avoiding these at all cost, but, chances are, most people won’t love either of these movies in comparison to the year’s best. ‘Peppermint’ was a weak revenge-thriller that will is destined to show up as a re-run on TNT for the next few years (full review here) while ‘House With A Clock In Its Walls’ felt like a worse fantasy family movie than what we got with the ‘Night At the Museum’ franchise. If anything for Jack Black, at least it was better than ‘Goosebumps 2′, even though the movies gave off similar vibes. Lastly, the ‘Maze Runner’ franchise finally came to a close with ‘Maze Runner: The Death Cure’, which felt like one of the longest movies of the year. I didn’t hate it, but there wasn’t anything to really love about the movie that kept me super engaged. Every year I say it over and over again, let’s move on from Young Adult novel adaptions… they don’t work.