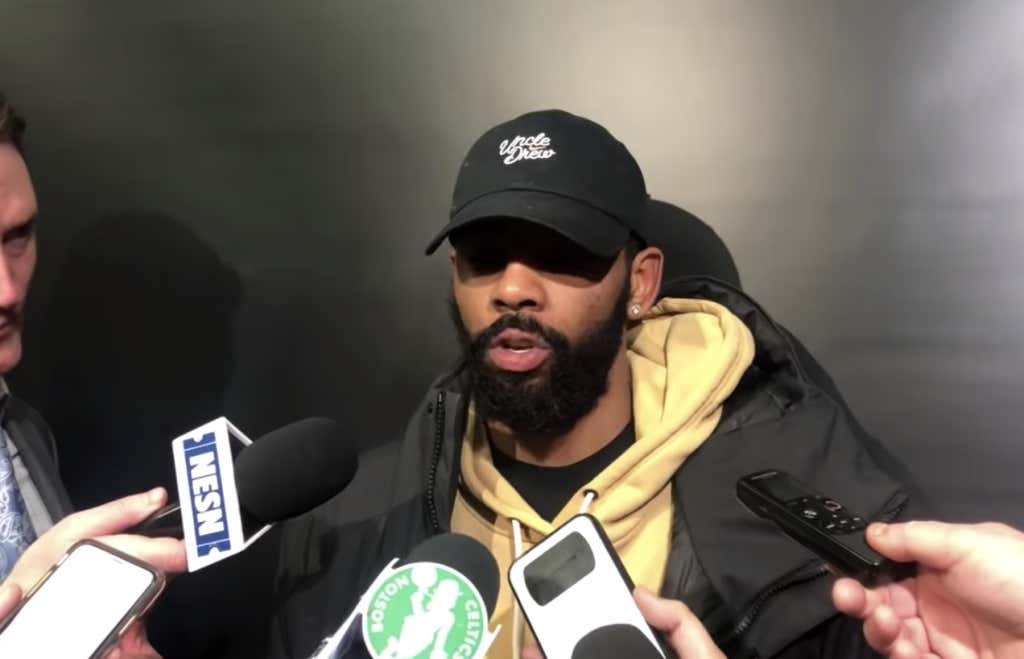 You knew this was coming almost the second the words left Kyrie’s lips. People saw the soundbite float around social that just had the LeBron clip of the interview and fired up the hot take machines. Now I thought about ignoring this as I saw more and more takes like this come out, but then during my normal self inflicted torture of listening to Felger and Mazz to see their thoughts, I’m not surprised they too thought this was yet another example of Kyrie taking a dig at the young guys. They even went so far as to say Kyrie celebrating his dagger three was a nice fuck you to Brad Stevens for not getting him the ball against Orlando. Common sense would tell any person who has actually watched Kyrie before that the pull up Fuck You Three is a regular part of his arsenal and something he does all the time. It wasn’t a way to stick it to Brad or upstage Brad or anything like that. It’s a shot Kyrie uses all the damn time.

First, we got on Kyrie for his public comments after that loss. Now, we’re also going to get on Kyrie because he admitted he was wrong? To me, this is trying too hard. This isn’t me just being a Green Teamer either, this is me just listening to what he’s saying without trying to fabricate what his true intentions were. If you look at his interview and listen to all of  it, not just the LeBron part you see a guy who is accepting responsibility of the fact that he wasn’t being a good leader, and that he has to put it on himself to understand what is needed of him and how to bring the best out of his teammates. Isn’t that a positive? Kyrie didn’t “make the story about him” his performance in that Toronto win WAS the story.

When I think of a leader, I think of someone who takes responsibility for his actions and is big enough to admit when he’s messed up. Why is it not possible that when Kyrie said how he now understands what LeBron was going through as a leader that it wasn’t a dig but rather a guy who never had to be a leader now understands the impact his words can have? Did everyone miss that part about his comments? As we know this is a new role for Kyrie, one that he wanted, and I just can’t understand how he can be killed when he says something maybe he shouldn’t to the media out of frustration, but then can also be killed when he man’s up and acknowledges that he made a mistake?

There’s no doubt about it, his comments after ORL were rough. It sounded like he was reaching the end of his rope given the current situation the Celtics are in. But emotions can run hot at times, and I think what’s gone on over the last 12 or so hours as people try and dissect his words and dissect his reaction after hitting a big time shot, something that isn’t all that new, is silly. Should Kyrie talk less to the media? Sure, most of what he says doesn’t have to be put out there for this type of stuff to happen, but it’s exhausting coming up with these false narratives when it was pretty clear what he was doing last night.

We can’t say we want athletes to be open and honest, and then they are, and immediately we try and spin things to fit a certain narrative that clearly wasn’t the case. The young guys played great last night, why would Kyrie want to continue to take digs at them in the very same interview where he said he was wrong to do such a thing and that shouldn’t happen? Think about it for me one time would ya.