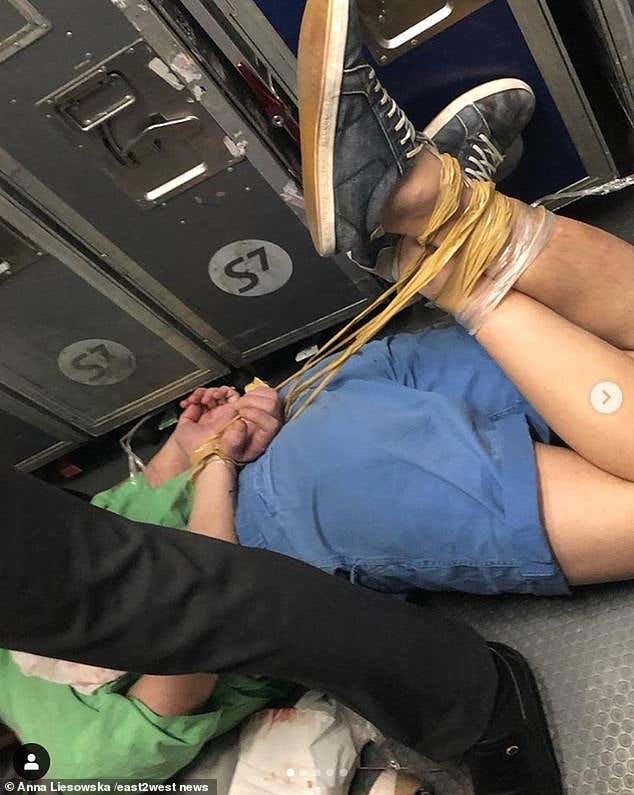 Express- Plane passengers were forced to hog-tie a fellow passenger who went on a rampage during a flight from Bangkok to Russia – and pictures have been released showing the shocking scenes. A plane passenger who began “attacking” people around him after reportedly drinking from a bottle of whisky was tied up by his fellow passengers to prevent from causing harm mid-flight. Shocking images from the flight to Russia shows the man, believed to be 26 years old, lying on his front on the aircraft galley floor with his hands behind his back. His hands are hog-tied to his ankles with tape and belts. According to reports, the passenger had recently been released from prison in Thailand.

After taking off, the cabin crew had struggled to control the man in question and the pilot said he was prepared to make an emergency landing as a result of the violent flyer. Passengers hogtied him and he remained on the floor for around four hours until the A320 flight reached Novosibirsk, Russia’s third largest city. “Witnesses confirmed that the captain had warned passengers that they might need to land in China or Mongolia because of this hooligan.”

I know it probably didn’t feel like it at the time, but that (allegedly) drunk passenger was the best thing that ever happened to the people on that flight. Anybody who has ever flown knows that every flight is a powderkeg of emotions because of the unspoken rivalry that exists between passengers. From getting on line to board the plane based on your zones, to battling for overhead compartment space, to battling the stranger next to you for the armrest. The tension on any flight can be cut with a knife. However, this over served young man galvanized the entire plane and brought them together against a common enemy, not unlike Herb Brooks in Miracle. Look at the chemistry on this plane as people were giving up belts and any other object they had so they could tie up a drunk human.

That there is some real life kumbaya shit. There was no unspoken anger about who was ripping ass and making that weird airplane fart smell or which people’s shitty kids that were crying. Everyone had one goal: To tie up the drunk dickhead like a hog before a pig roast so they could enjoy the rest of their flight instead of landing in fucking MONGOLIA. I imagine flying to Russia is bad enough. Having to do a layover in Mangolia because some dude couldn’t handle his cheap Thai whiskey is flat out disheartening. There is something truly heartwarming about a large group of humans that don’t know each other coming together to take down a common enemy.

That being said, if this drunk passenger had just said he had just been released from a Thai prison, I’m pretty sure they could have let him get as crazy as he wanted in his own section of the plane. The shit that dude must’ve seen would make even Donnie shake his head. If anybody deserved a little bit of a free pass for getting tipsy on the plane, it’s him.