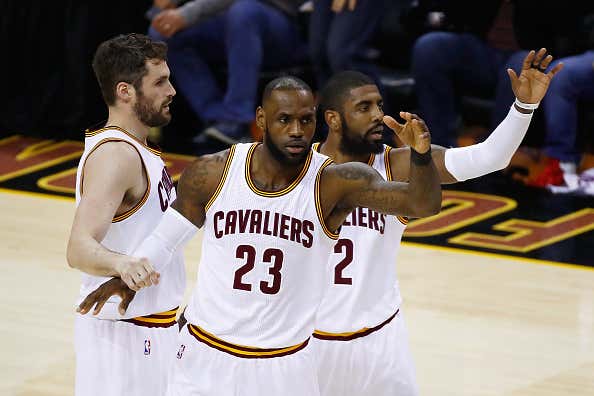 [The Athletic] - Of all the people? on? Earth who? could possibly?? be sitting with LeBron James last weekend as Kyrie Irving called to apologize for an attitude that basically led to the breakup of the Cavaliers’ dynasty.

Would you believe it was Kevin Love?

“LeBron looked down at his phone and he showed us,” Love told The Athletic, describing the scene. “He was like, ‘I wonder what he wants?’ ”

James returned Irving’s call in private. A source close to James declined to share what was said on the call but said LeBron was very appreciative that Irving called him. If their relationship was frayed, which the manner of their breakup in Cleveland says that it was, then some repairs are obviously underway.

We covered the fact that Kyrie called LeBron to apologize about being a pain in the ass during his time with the Cavs. But, now The Athletic put out a story that Kevin Love was having wine (of course) with LeBron when Kyrie called.

Don’t get me wrong. I do think Kyrie called LeBron because he realized being a good young player on a competitor can be a tough situation. You want to be the guy but you have a star ahead of you. It makes sense. He’s dealing with that after the success of Jayson Tatum and Jaylen Brown last year during the run to Game 7 of the Eastern Conference Finals.

But, Kyrie calls LeBron the night the Cavs and Lakers play each other? He knows what he’s doing. It’s a great move. I’m skeptical to just how serious Kyrie is about the whole situation. Sure, part of it is apologizing and getting a clear conscience. But, he knows there’s a chance he sees LeBron in the Finals. He’s starting the mental warfare now. It makes sense. Maybe he’s sucking up to Kevin Love hoping that Boston finally trades for him. Who knows there? But he knows Love and LeBron were together and you can’t convince me otherwise.

How about this quote though:

“Kyrie knows he left a year early,” said another key player from those Cavs teams, who asked not to be named. “We were supposed to take another run at it (last season) and then take a look at everything.”

Now, that I’m interested in. Would the Cavs have been able to push the Warriors with Kyrie on their team – assuming Kyrie stayed healthy? I highly doubt we would have saw JR Smith forget the score in Game 1. That’s for sure. That would have hurt the old blogging factory.

I’m just officially on watch for this whole situation though. The fact that Kevin Love was sipping on wine when Kyrie called is putting up my tin foil hat.