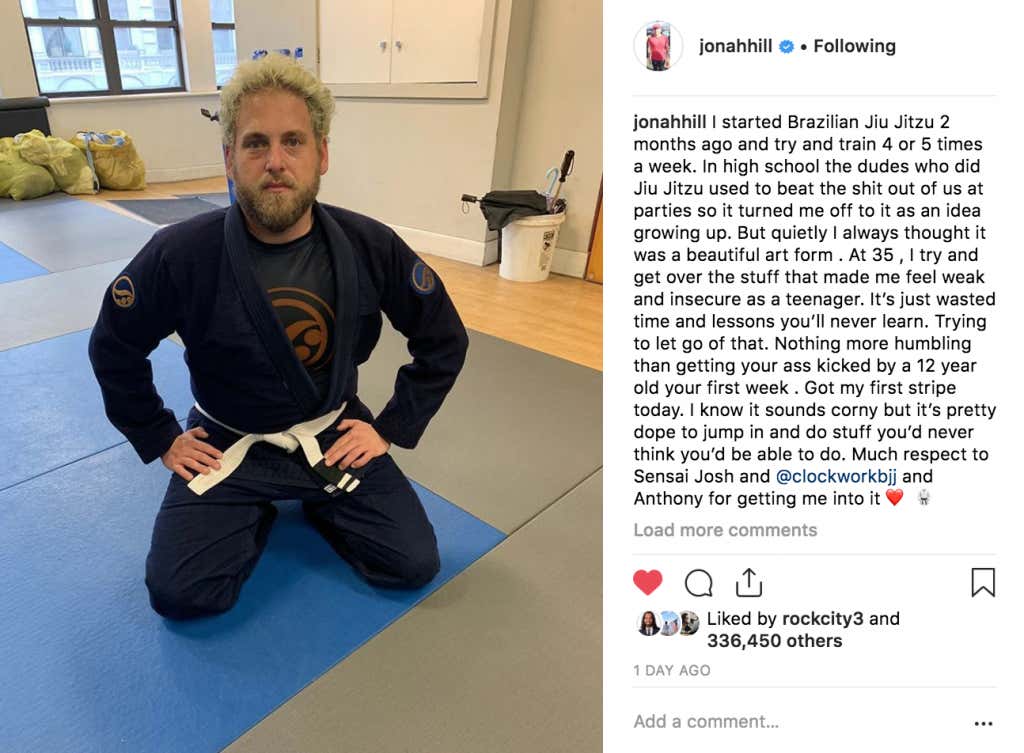 I love Jonah Hill. I don’t know anyone that doesn’t love Jonah Hill. He’s actually a friend of Barstool’s very own Failing Upwards, who have thrown a couple “Jonah Hill Days” in Brooklyn, and he wound up surprising the gang and making an appearance to this year’s because he’s the god damn man.

Yesterday, he posted the above photo to Instagram, and wrote a bit about his recent journey into Brazilian Jiu-Jitsu (or jiu-jitzu as he spells it), as well as sharing the fact that he just earned his first stripe on his white belt.

If you don’t know the significance of such a thing, basically – your progress and skill in the sport is determined by belt ranks. Everyone starts off a white belt, and the better you get, you can move along to blue, purple, brown, and eventually, if you stick with it long enough and are skilled enough, you can become a black belt. Now, that’s usually like, a 10-15, sometimes 20 year journey to the top, depending on the level at which you excel, but in-between belt promotions, you earn stripes to signify progress along the way. Getting these stripes is always an honor for those who receive them, and ABSOLUTELY something to be proud of. Very, very proud of.

As a fan of the sport myself, I love seeing celebrities spread the word about it.

Demi Lovato has been at it for years, and is actually a pretty skilled blue belt from what I understand…

I’ve kinda gone in and out of practicing jiu-jitsu myself, but waaaaaay more “out” than “in”, just because it’s so difficult to fit into a Barstool schedule, but truly cannot say enough great things about my experiences on the mat and those I’ve met through it. There’s no more welcoming and friendly community than that of a jiu-jitsu gym. Ask anyone who’s rolled, and they’ll all confirm that for you. There’s also no more humbling experience, because you’ll get on the mats with a 9-year-old with a few more stripes than you and before you know it you’ve been tied into a pretzel begging for mercy. And then…he’ll teach you how to stop that from ever happening again. It’s awesome. I’m just babbling on now, but my point is, if you’ve never given BJJ a shot, find your local gym and take a free trial class. Most will offer them. See if it’s for you, and I think you’ll be grateful you did.

Congrats to Jonah on the stripe. Good shit!

P.S. Check out Jonah Hill’s writing/directing debut “mid-90s” he put out last year if you missed it. It’s a really great coming-of-age flick about a bunch of skateboarders in – you guessed it – the mid-90s. You’ll dig it.