The Ottawa Silver Seven successfully fend off a challenge for the Stanley Cup from the Dawson City Nuggets. Ottawa won both games in the best of three series by a combined score of 32-4. In the 23-2 finale, Frank McGee scored 14 goals to send Dawson back to the Yukon empty-handed. The Nuggets had traveled 4,000 miles (6,400 km) in a month’s long journey to Ottawa.

In the first two decades of the Stanley Cup’s existence, the silver chalice did not belong exclusively to one league. Meaning it was open for challenges for any hockey team throughout Canada. While the first decade was dominated by several teams in Montreal and Winnipeg. In 1903, the Stanley Cup was captured by the Ottawa Hockey Club. Nicknamed the Ottawa Silver Seven they may have been the strongest team during the Stanley Cup’s challenge era. Over the next two years, led by stars like Frank McGee and Alfred Smith, the Silver Seven brushed aside all challenges.

The idea of a challenge from the Klondike came about in 1901 when the Stanley Cup was held by the Winnipeg Victorias when a letter was received from Weldy Young a miner living in the Yukon that had once played on Stanley Cup challenge team. Dawson City located near the Alaskan border and 143 miles south of the Arctic Circle had been the hub of the Canadian Gold Rush in the Klondike, drawing all sorts of prospectors to its remote location. Young had played for the Ottawa club before moving to the Yukon Territory. This time the challenge was accepted during the summer of 1904 with the games set for the New Year.

The scheduling of the game posed a problem for Weldy Young, who was responsible for overseeing elections in Yukon and could not make the trip with the rest of the team. The team was an All-Star squad of players in the Klondike region; some had major hockey experience such as D.R. McLennan who had previously competed for the Stanley Cup with Queen’s College against the Montreal Victorias in 1895, while the rest were true amateurs playing in their spare time.

Due to the remote location of Dawson City and the difficulty of traveling in the early days of the automobile, players began the journey to Ottawa on December 18th on Dog Sled and bicycles. Just to get to a train, the players of Dawson City nicknamed the Klondikes or the Nuggets had to go 330 miles to Whitehorse. Once in Whitehorse, the team rode a narrow gauge train over rough terrain to reach Skagway, Alaska. From Skagway, the Nuggets took a steamship to Vancouver, where they could finally board the Trans-Canadian railroad to head eastward.  The trip from Whitehorse to Skagway took longer than expected as winter storms delayed their journey for three days, which caused them to miss their ship to Vancouver. Once again, they were delayed from getting a new ship by three days to heavy ice buildup and were forced to take a detour to Seattle due to dense fog in the port of Vancouver, with many players suffering from seasickness. From Seattle they got on a train to Vancouver and were finally on their way, arriving two days before the first game at Dey Rink in Ottawa, set for Friday 13th.

Arriving in Ottawa, Dawson City played well in the first half of the opener, as they trailed at the break 3-1. The game would turn ugly in the second half as Ottawa won 9-2, with the Klondike team complaining about several missed calls, as they clearly began to showing fatigue from their long journey. One particularly ugly incident led to a flat out assault on the ice as Norman Watt of Dawson City tripped Ottawa’s, Art Moore. Moore responded by hitting Watt in the mouth, which led to Watt taking his stick and striking Moore over the head knocking him unconscious for ten minutes.

The loss left Dawson City bitter, as Norman Watt ripped Ottawa star Frank McGee, who was limited to one goal in Game 1. Watt proclaimed McGee was not as good as they claimed. This angered Frank “One-Eye” McGee, who had lost an eye while playing hockey due to a high-stick in 1900. This angered McGee and the rest of the Ottawa Silver Seven who set out to teach Dawson City lesson for Game 2 on January 16th. McGee scored four goals in the first half and another ten in the second half for a record 14 goals, which still stands as the record in a Stanley Cup game. Ottawa struck like cobras and showed no mercy as Dawson City Goalie Albert Forrest did a marvelous job despite his team getting destroyed 23-2 to end the challenge.

After the games were over the Ottawa club honored their worth competitors from the Yukon at a banquet to celebrate another successful defense of the Stanley Cup. At the banquet members of the Silver Seven took turns attempting to kick the Stanley Cup over the Rideau Canal, which led to officials needing to traverse the iced-over canal in the morning to save the silver chalice from a watery demise. 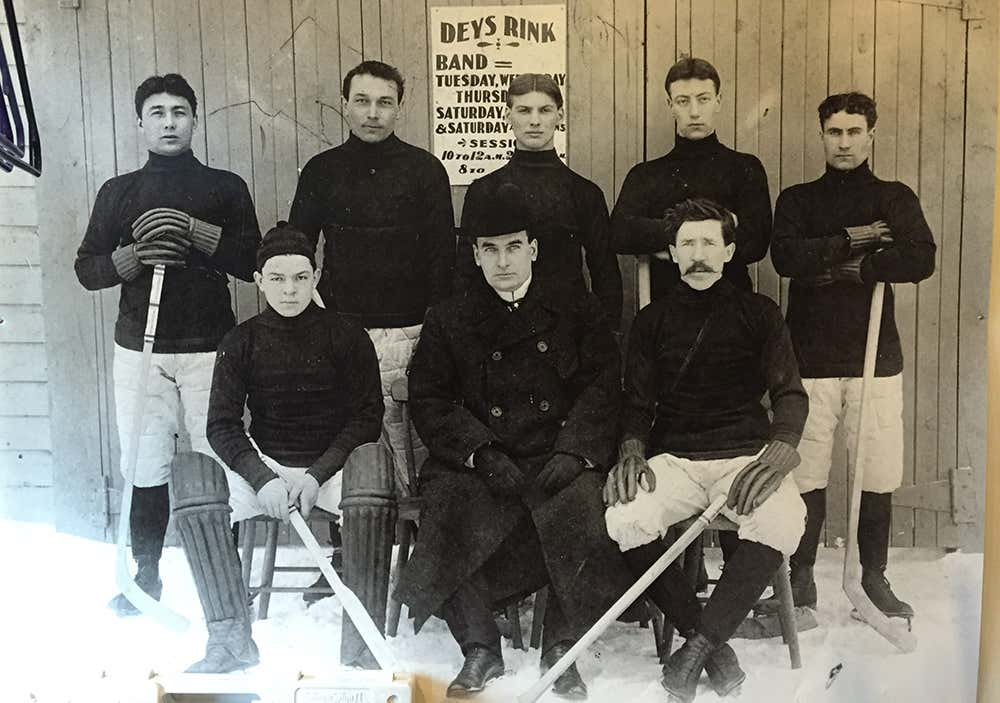 The Dawson City team spent the rest of the winter barnstorming Eastern Canada and the United States joined by Weldy Young after completing his election duties back home. The Klodikes posted a record of 12-10-1 during the tour. The team returned home legends despite their 32-4 loss over the two games combined, the city of Dawson is forever engraved on the top of the hockey’s Holy Grail. The Ottawa Silver Seven, successfully defended the Stanley Cup ten times before their reign ended in March of 1906 with a loss to the Montreal Wanderers. As the challenge era came to an end and the best teams turned professional, the Silver Seven became known as the Ottawa Senators.