Since 2006, I have been rating every movie I see throughout the year on a 0-100 scale. I have a methodology that I have laid out before and can put at the bottom of this post. Starting today, and lasting until January 31st, I will be counting down my 2018 movie rankings from number 205 all the way to the number one top spot! For the next two weeks, I will be doing two sets of movies per day and then finishing with 10 per day. Today’s rankings will cover movies 171 through 190. Enjoy! 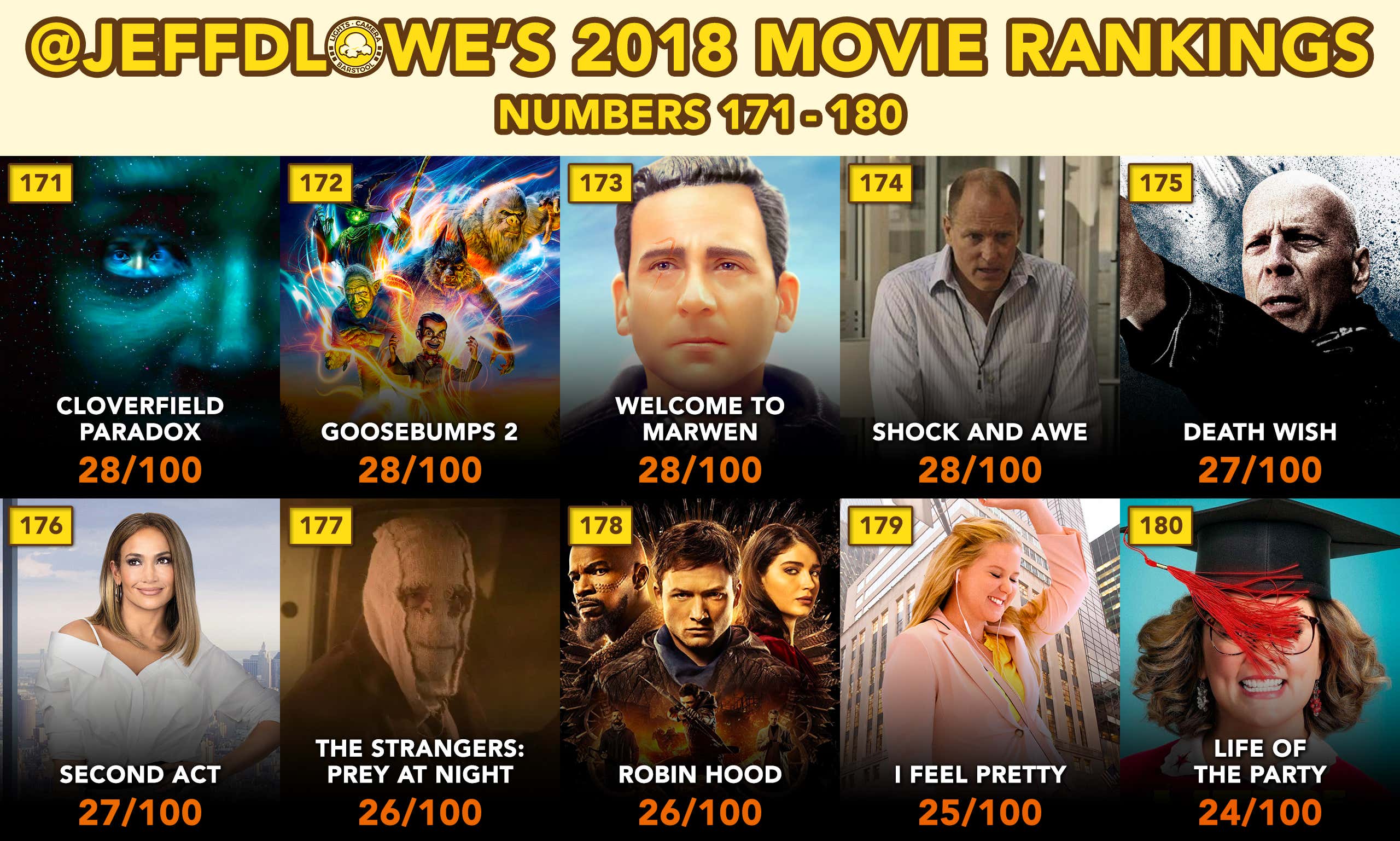 171-180: One movie in this set of 10 movies in my rankings sticks out like a sore thumb: ‘Welcome to Marwen’. The movie, once touted as a contender for a run at the Oscars, is this year’s ‘Downsizing’ and a massive letdown. ‘Marwen’ lacks every ounce of charm and intrigue scene in the documentary in which the movie is based on, ‘Marwencol’. While the visuals might be nice, everything about the plot, story and character development can be best summed up as a little “creepy” and bizarre. ‘Cloverfield Paradox’, a movie forced into the strangely-put-together Cloverfield Universe, was a dud on arrival, as well as comedic snooze-fests in ‘I Feel Pretty’ and ‘My Mom Goes to College Wi–‘ uh, I mean, ‘Life of the Party’. They made sequels to ‘Goosebumps’ and ‘The Strangers’ for some reason and both ‘Goosebumps 2′ and ‘The Strangers: Prey at Night’ were somehow worse than their predecessors. Do you want a run-of-the-mill, yet below average Bruce Willis action movie? Well, then see ‘Death Wish’. Do you want a cliched rom-com? Go check out ‘The Second Act’. For those looking to find a nice cliched political drama-bore, I suggest watching ‘Shock and Awe’. Lastly, we arrive at ‘Robin Hood’, where the famous character wears Nike clothes and lives in some sort of weirdly-undefined futuristic-yet-in-the-past world. It was brutally terrible, but also, at times, funny. Our full review can be found here. 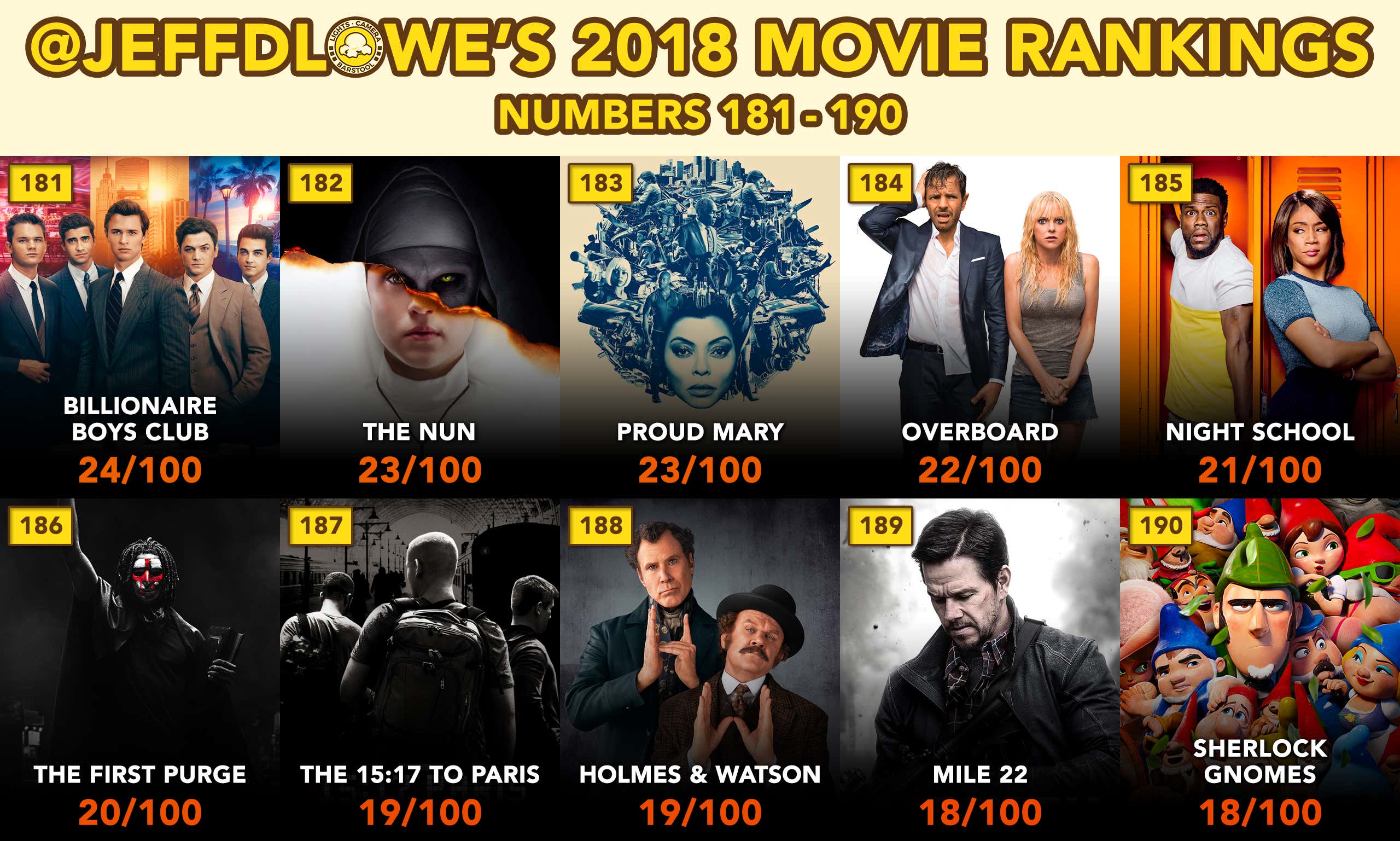 181-190: Stinker after stinker is the name of the game for this group of 10 movies in my rankings. The movie that pissed me off the most was ‘Holmes & Watson’, which was unfunny on an almost offensive level comedy-wise. Our full review can be found here, but the lack of any well-written joke over the course of the movie’s 90-minute runtime was just shocking. I don’t have much to say about ‘Proud Mary’, ‘Overboard’, ‘Sherlock Gnomes’ or ‘Night School’, they were simply just lifeless and dull, especially when compared to the movies in their respective genres. There are always around 50-60 forgettable movies each year that I see and those four movies are prime examples. If you like Mark Wahlberg action movies, then you might like ‘Mile 22′, but it wasn’t my cup of tea. Jump scares were aplenty in ‘The Nun’, which was only popular for its terrifying YouTube ads that scared everyone from kids to teens to Olds when they logged onto the website. ‘The First Purge’ is the latest addition to a Purge Universe that continues to squander what should be an intriguing and terrifying concept. The hamfisted social commentary was cringeworthy and might have been the worst attempt from any movie this year. Clint Eastwood’s ‘The 15:17 to Paris’ was his first of two mediocre-to-poor movies this year and it can easily be chalked up to the fact that he used the actual people (not actors) to the play the roles of the three men who foiled a terrorist attack back in 2015. The acting brought the movie down, even though you must commend the three heroes for giving it their all. They were simply put in too tough of a spot. Oh, ‘Billionaire Boys Club’ was bad and featured Kevin Spacey, quite the one-two punch, eh?