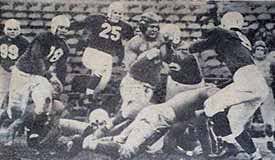 In the first professional football All-Star Game, the New York Giants take on a team compose most of NFL stars at the Wrigley Field in Los Angeles. The All-Star team also included West Coast Professional All-Stars from the Los Angeles Bulldogs and Hollywood Stars. The Giants who won the 1938 NFL Championship would also win the first Pro Bowl 13-10 on a Ward Cuff field goal in the final five minutes.

The idea of NFL team facing a team of All-Star was not a new one, as the NFL played in the Chicago All-Star Game since 1934 pitting a team of college All-Stars against the NFL Champions in a preseason game at Soldier Field. Seeking to help boost the league’s popularity, Washington Redskins owner George Preston Marshall along Los Angeles Times Sports Editor Bill Henry and promoter Tom Gallery came up with the concept to have a Professional All-Star Game. At the time, the NFL was looking to expand westward, as Chicago was the league’s westernmost city during the 1938 season. Out west, there were other professional football teams, including the Los Angeles Bulldogs and Hollywood Stars who had hoped to one day join the NFL, as cross-country travel became easier. The first All-Star Game gave fans on the West Coast their first look at the NFL. The game was to be played at Wrigley Field, a near replica to the ballpark in Chicago famous for being the home of the Los Angeles Angels of the Pacific Coast League in Baseball.

The New York Giants coached by Steve Owens won the Eastern Division in the NFL on the last day of the season by beating the Washington Redskins to finish with an 8-2-1 record. They would go on to beat the Green Bay Packers in the NFL Championship Game at the Polo Grounds 23-17. The game was played on December 11th, giving the Giants five weeks before recovering to play in the All-Star Game.

The Giants faced a team of All-Stars give the title All-American Professional All-Stars. The All-Americans were made up primarily of NFL All-Stars coached by Gus Henderson, whom the Detroit Lions had just hired as their new head coach, having previously worked for the Los Angeles Bulldogs. There were members of the Bulldogs and Hollywood Stars on the All-Star squad.

The weather was not good on the day of the game as it was cold and foggy in Los Angeles, with a disappointingly sparse crowd of 15,000 on hand. The first half did not see much action as both teams managed just three points in the second quarter after a scoreless first. The first touchdown came in the fourth quarter when Slingin’ Sammy Baugh of the Washington Redskins hit Detroit Lions halfback Lloyd Cardwell in stride for a 70-yard play to give the All-Americans a 10-3 lead. The sleepwalking Giants finally arose after the play as quarterback Ed Danowski led a 73-yard drive that ended with a 22-yard touchdown pass to Chuck Gelatka. The game remained tied 10-10 until Ed Goddard of the Cleveland Rams mishandled a punt, giving the Giants an easy scoring chance, that led to a 17-yard field goal by Ward Cuff, which would give New York a 13-10 victory.

The All-Star format of the NFL Champion against a team of All-Star remained in place for five seasons, though the inaugural one was the only one that had players from outside the NFL invited to play in the game. The game was played in Los Angeles for the first three years, moving to Gilmore Stadium for the next two. After the bombing of Pearl Harbor, the game was moved East in 1942, with the game played at the Polo Grounds in New York. Following the 1942 season, the game was played Shibe Park in Philadelphia with the All-Stars finally ending their drought with a 17-14 win over the Redskins. That would be the final NFL All-Star Game until 1950 when the current conference against conference format was born, that was the same year that the game became officially known as the Pro Bowl. Of note, the NFL and AFL would play separate games up until the full merger took place during the 1970 season.