Since 2006, I have been rating every movie I see throughout the year on a 0-100 scale. I have a methodology that I have laid out before and can put at the bottom of this post. Starting today, and lasting until January 31st, I will be counting down my 2018 movie rankings from number 205 all the way to the number one top spot! For the next two weeks, I will be doing two sets of movies per day and then finishing with 10 per day. Enjoy! 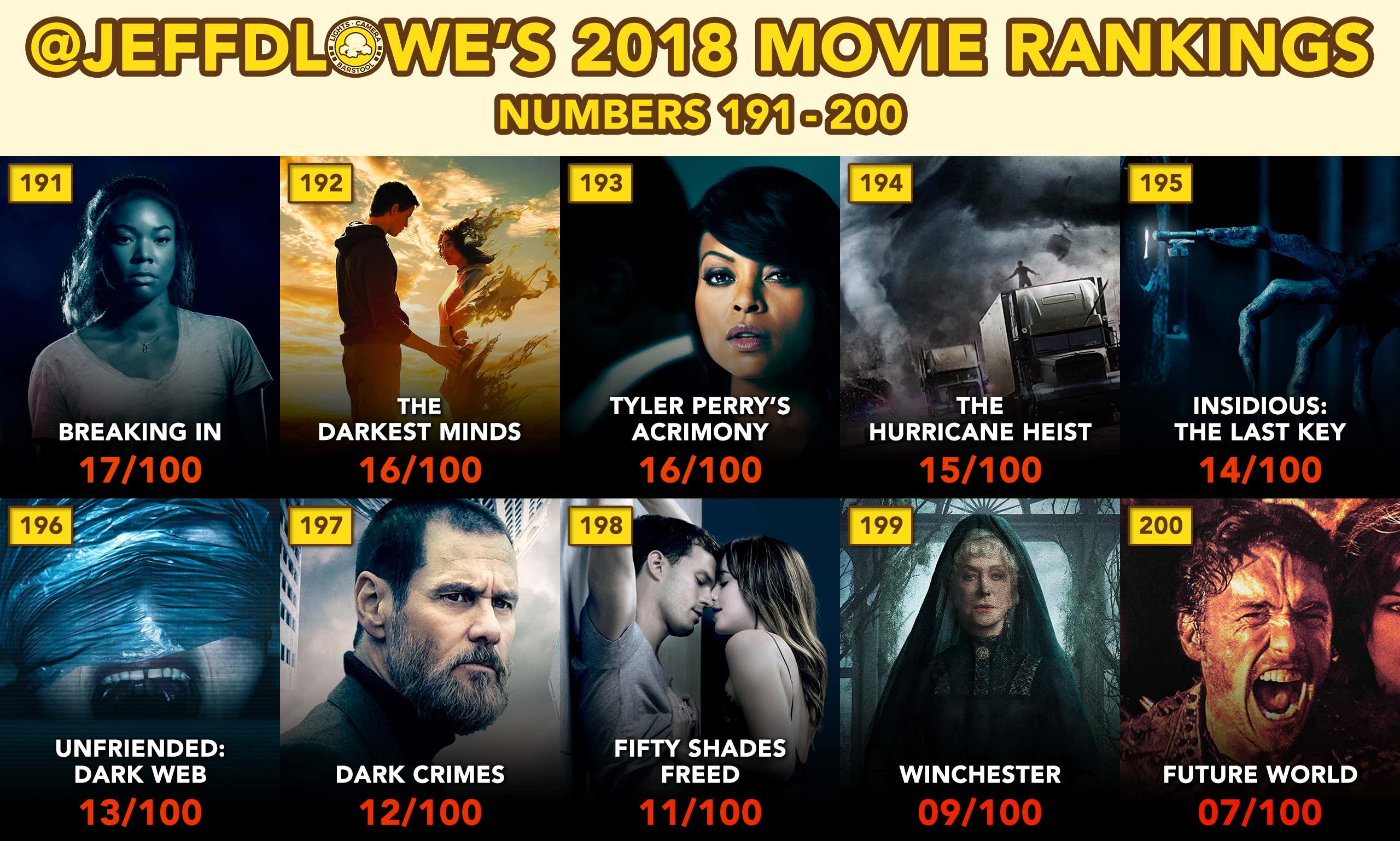 191-200: This section of the movie rankings always truly has the worst movie experiences of the year for me. The Bottom 5, for the most part, usually packs enough “so bad it’s funny” laughs, but the 20-or-so movies before the five are usually competently made enough to not fit that same description. There are some elements that get a chuckle here and there, especially from this year’s crop, but they’re mostly just boring, bland movies with weak stories. I enjoyed ‘The Hurricane Heist’ a bit when I first watched it but upon the second watch, I realized I was a moron. It’s a ridiculous movie and has almost nothing memorable enough to qualify it as anything near a cult classic. The ‘Unfriended’ series is borderline unwatchable, which can also be said about ‘Dark Crimes’ (Jim Carrey, what are you doing, man?), ‘Breaking In’ and yet another “Young Adult” stinker in ‘The Darkest Minds’. Even though the last movie was a brutal watch, we can finally cheer for Jamie Dornan and Dakota Johnson as they have been released from the shackles of the ‘Fifty Shades’ franchise. ‘Winchester’ made a late surge to avoid the Bottom 5 and so did ‘Future World’, which was an incredibly bizarre and off-putting movie from James Franco. 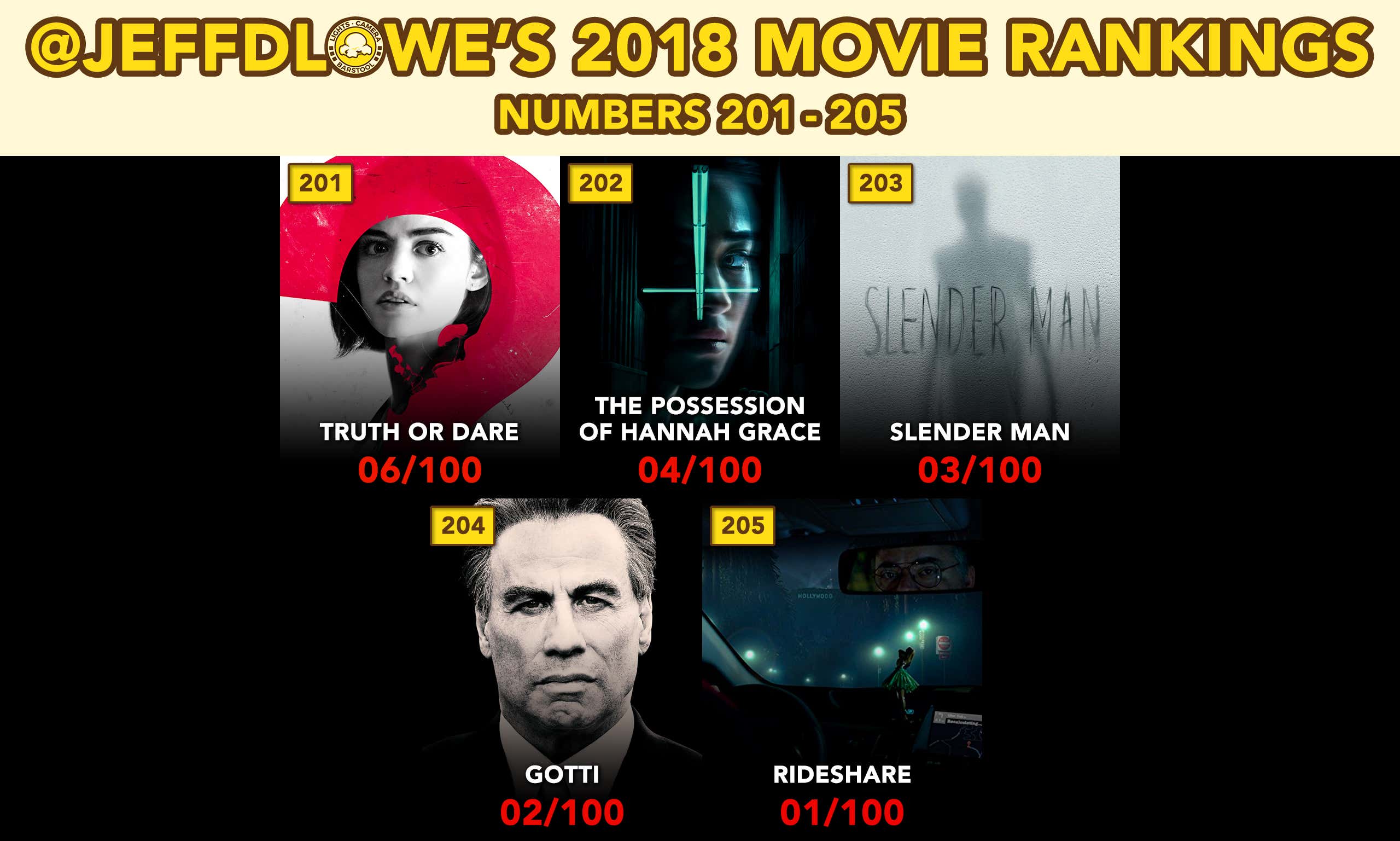 Bottom 5: These were some real stinkers, folks! Two movies, ‘Truth or Dare’ and ‘The Possession of Hannah Grace’, involved stars from the hit-show ‘Pretty Little Liars’ in Lucy Hale and Shay Mitchell. I like both of them, but their movies were terrible additions to the horror genre. One (‘Truth or Dare’) had a ridiculous premise with a cringe-worthy script full of “millennial” references, while the other (‘The Possession of Hannah Grace’) was a hollow, kind-of-gross exorcism-like movie that was a bore from start to finish. ‘Gotti’ was incredible for all the wrong reasons, trust me, it’s a must-watch, but was still a disaster of a movie. It also still bothers me that ‘Slender Man’ was even made into a movie. It doesn’t deserve any respect or love. Lastly, we, possibly unfairly, go to the indie film ‘Rideshare’. I feel bad that we reviewed this movie because it is a smaller release, but we were asked to do it and had to bring all of our usual honesty. It was a perverted and disgusting movie about a killer-rideshare driver and there was nothing positive to say about it. The effort and mild creativity were the only things keeping it from the rare 0/100.