You might be thinking, “Uh, Blog School 101… The week is moving along & your weekend story is no longer relevant.” Well my brain has not been capable of forming solid sentences until today. And yes, others might have gotten an Eagles hangover story out by now, but I’m not them and, uh, 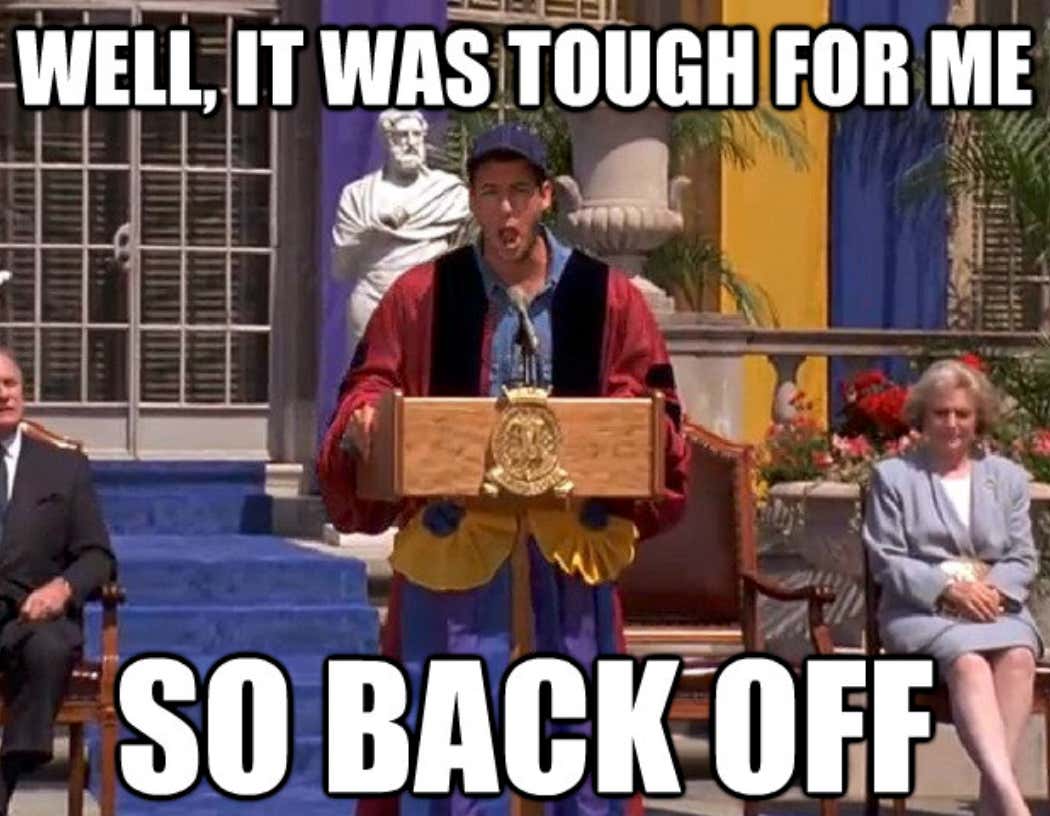 When the plane began its descent into Houston on the first leg of my trip back home yesterday, a sudden, sharp pain lurched me forward in my cramped, economy seat. It wasn’t a flashback to two Lattimore interceptions, it was more like I was getting stabbed on either side of my nose, and that my eyeballs were blowing up like one of those pull-cord emergency rafts.

I hadn’t showered in over 24 hours, my hair was matted, I had the scaries & wreaked of beer, fried food, & smoke, and now I was frantically poking my face bones & pressing on my eyelids to keep my corneas from expanding out of my skull. This is probably what I looked like to the middle-aged woman in business casual sitting next to me as I tried to keep calm:

It turns out I was experiencing an odd sinus issue called “barotrauma” that could be set off by dehydration & smoking. New Orleans, you got me good.

Two days before this travel debacle I’d arrived in The Crescent City with a spring in my step; A last minute trip exploring a new locale with an old rugby friend was a welcome break from freezing, gray days in NYC. I came frolicking out of the hotel ready to go.

We zig-zagged around the French Quarter from the Mississippi River to the tiny side streets in between, stopping only to watch the Chiefs trounce the Colts whilst refueling with cajun delights. In that span there was a frozen drink from those machines they never really clean, a couple shots, several hurricanes, a few tall boys, about a zillion cigarettes (that quitting thing from a while back didn’t pan out) & so on. Time kind of disappeared & somewhere in there I spent $85 on two $10 green wigs.

From there we made our way to Frenchman St. for a ‘live music’ bar crawl of sorts. Starting to get fuzzy, my friend suggested we slow it down a bit & proceeded to order several bottles of champagne as we watched the bands play. After befriending an older Australian couple & exchanging contact info (“Oh, we’ll absolutely visit soon!”) I had one of my happiest moments of the trip dancing with a brass band out in the street. 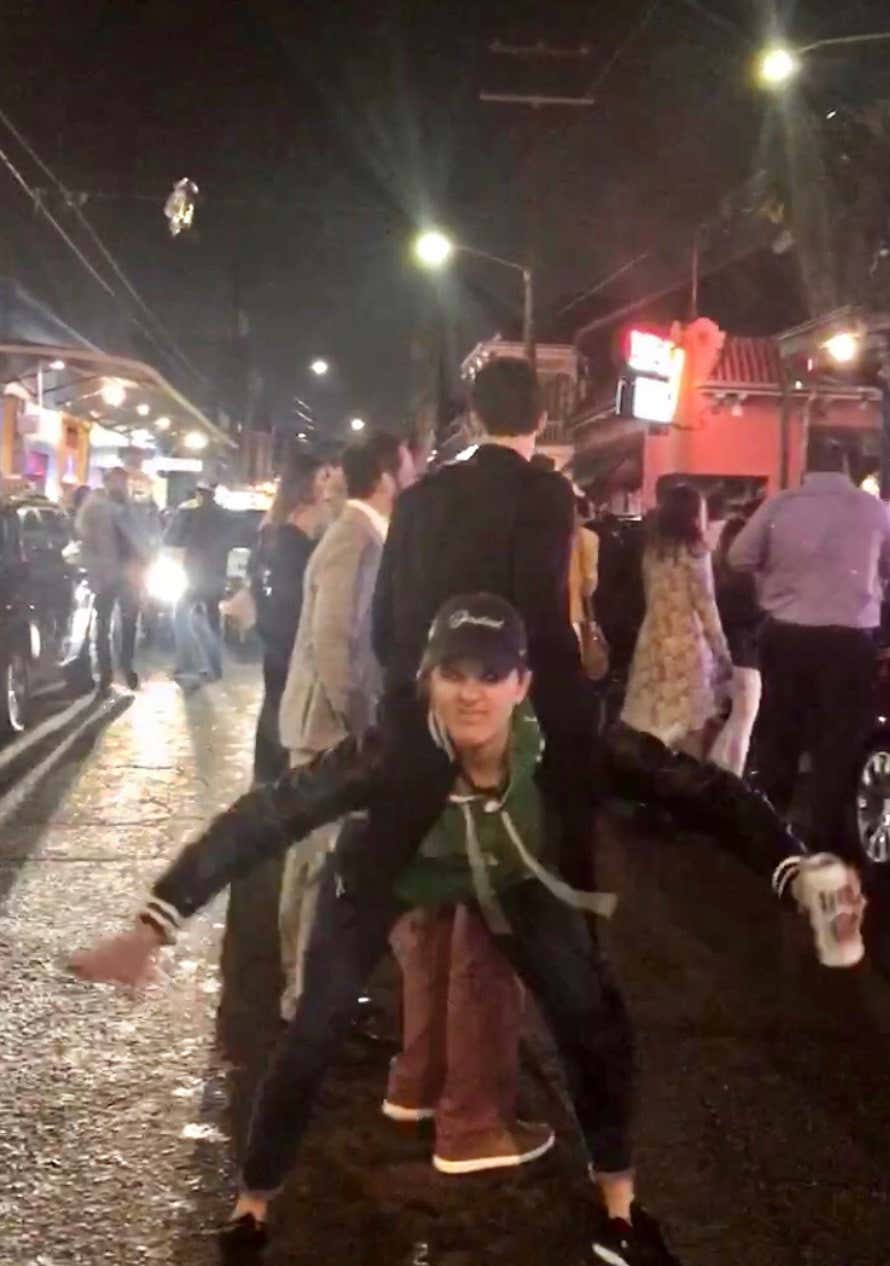 The day had been amazing & we decided to head back to Bourbon to wind down the night. Settling in for some people-watching up on a balcony with a plastic bag of Millers, I felt like a sociologist attempting to learn something about the drunk-human condition. It was there we met the only douche-canoes of the trip & I took the express train to Triggeredtown.

I’m still not 100% sure what I was trying to say with that Tweet, but I do remember watching them call women over to their perch, & when the women looked up to talk to them the guys would get on a megaphone & yell out what they thought was ugly about those women. Seeing the gals faces fall as they walked away felt like such bad vibes in contrast to everyone else around us (who were just peacefully enjoying boobs), and I was *just* hammered enough that I couldn’t help myself. I was going to change their hearts!

::Narrator voice:: Kate did not change their hearts.

After trying to reason with them (I was probably speaking a new language at this point) I decided it would only end with me in a viral video falling off a balcony, so we just moved a few feet down & carried on with our night (::Narrator voice:: False. She spent 30 minutes unleashing a string of bizarre Tweets that she felt were very powerful at the time but they were not).

Speaking of, the following day I had some more Tweets that didn’t age well.

It started off well enough with beignets & boobs & a second wind that led to excellent tailgate-hopping, but I may have gone overboard after that. I woke up that morning with a *feeling*. The Eagles were 100% going to win & I could feel it. I just knew it.

Hindsight, eh? After the game we got interviewed by Philly’s ABC10 news & I rambled away, ending it with, “We’ll get ‘em next year” before rolling off-camera like that James Harden GIF.

Then it was back to the bars & it felt like a walk of shame as everyone who-datted us.

But really though, one of the worst parts was how damn nice everyone was. The people in our awesome section kind of sucked (kept telling us they called security when we stood up after big moments, despite everyone else around us also standing), but even then other Saints fans came up to apologize to us on their behalf afterwards.

And over all it’d been a solid day.. that Sunday morning started with a Saints fan pulling a bag of Jello-shots from her purse & offering them to us, plus others inviting us into their tailgates, & it ended with revelers getting us drinks & saying they hoped we still had a great time in their city even after the L. I’m obviously not a hardo, but I still wanted to be a tiny bit bitter & they kind of ruined it. A damn delight.

Knowing our flights were at 5am we finally called it a night & ate our feelings with ribs, alligator bits, cheese fries, fettuccine Alfredo with grilled chicken & cake in our pajamas. It was a disappointing end, especially wondering what will happen next with Foles, but it’d been a good game & I still felt proud of the Birds for getting that far.

It’s now a dragging Tuesday afternoon, I still feel like a dumpster fire, the Eagles are out, & I’m listening to Dave troll on about Foles on the Rundown as I type this. But we’re also still champs for a few more weeks & despite the aftermath, I can’t wait to get back down to New Orleans again.