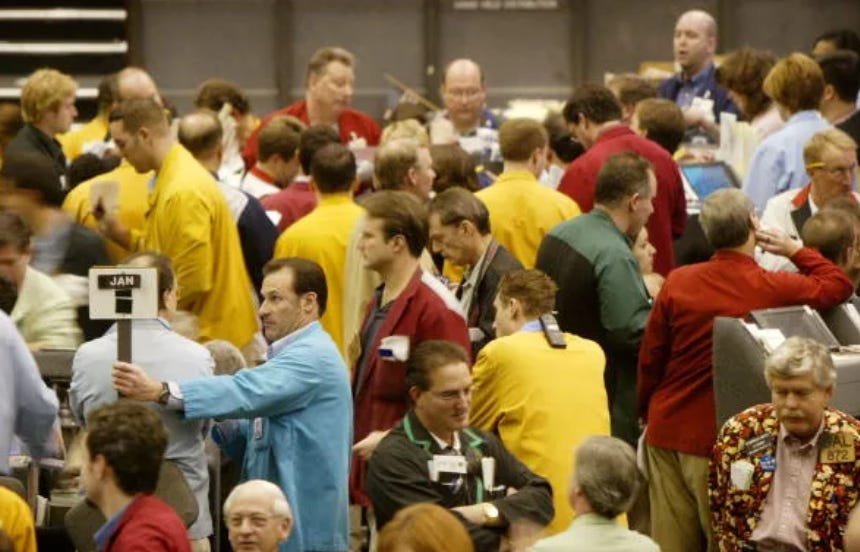 We're back for another edition of Traders Are Insane, a weekly segment where I share some of the most ridiculous trader stories submitted to me throughout the week. If you think you have some good shit, send it to me carl@barstoolsports.com.

Last week I asked for you guys to turn up the heat and you did not disappoint. Maybe it was because I highlighted the legend of Ceres Cafe last week and that motivated you to get weird with me. Or maybe you realized this is a safe space where I have no agenda other than to publicly share the debauchery that makes trading such a bizarre profession.

Seriously. You guys are SICK for enjoying this lifestyle. And sure maybe I'm a little sick for enjoying how much you enjoy it. But point remains you'd be hard pressed to find this kind of behavior in any other industry.

This week has a double dose of prostitution-related trouble, a simple yet funny concept of making a kid eat a vending machine, a woman trying to steal a winning lottery ticket, an extremely expensive bottle of scotch and, without a doubt, the most insane story behind a $10k bet that I have ever heard.

Cocaine for lunch at Ditkas?

Let's get to the submissions:

Man Vs. Machine  - Worked on a bond trading desk first year out of school in New York. Every year they picked 2 kids from our analyst class to do the "man vs machine" challenge. Challenge consisted of buying two of every single item out of a giant vending machine on our floor which included pretty much everything you could think of. Full bags of chips, candy bars, licorice, packs of gum, breath mints. Everything. Each kid had the entire trading day (from opening bell to closing bell) to eat one of every item from the vending machine. Sounds easy but its not. Everyone on the desk places side bets on top of it on who they think will finish first, or get the closest by end of the day. One of the kids kid ended up almost choking while trying to swallow a tin of tic-tacs and tapped out. Second kid projectile vomited all over his computer with like 3 items left. Needless to say the "man vs machine" challenge didn't happen the following year…

Dare you guys to invite WSD next time. He would absolutely mop the floor with you pussies and I don't say that to be mean. I say that as a matter of stone cold fact. BTW very interested to know how we interact with the bottom row of a vending machine. Do you have to eat all the mints and gum? Some of those certs have been in there for fucking YEARS.

Don’t Steal The Winning Ticket - Backstory: As you know, making a quick buck amongst traders is first thought that crosses their minds the second they step in the PIT, like betting on who can eat the most cheeseburgers from peppers next to the old Cal's(RIP) to the wholly grail of a winning lotto ticket at the downstairs quick mart where our incident occurred.

Aside from the coffee runs, it was standard practice to receive hundreds of dollars on a weekly basis to go downstairs and buy mega million or powerball tickets for groups of guys when they were bored. It was also standard practice to get those same tickets back a couple of days later to check for winners. Well it just so happened that this particular day i did not get asked to check the tickets, unfortunately. Sometime after lunch a commotion was heard by the escalators. There were a couple traders near by saying "that dumb bitch just won the lotto", "i just saw that hag downstairs jumping around screaming, saying she won". Dumb move on her part as guys knew she was going down to check their tickets and apparently the main guy kept a log of the serial numbers or something so that he knew what was theirs. Long story short, the winning ticket matched all numbers except the powerball or megaball number, worth like $175k. She got escorted out by security while hundreds of paper balls, pens, empty cups, "Sleezy cunts" or whatever the entire floor could get their hands on or out of their mouth, came raining down on her pathetic face. Shes was arrested, did a couple days in the slammer and the guys got their money (after many months in court). Justice served.

Honestly though I'd probably steal the ticket too. My big surprise is that none of your sleazeball bosses had her murdered which is 100% not a joke.

The Hooker Works With You, Not For You -  Two clerks, not making best use of their time one weekend night, decide to "order out." They figure they can go halvsies on an escort, and they start making calls. Hour of so later, the knock comes to the door of the loft they shared.  They open the door and standing there is their purchase we’ll call her Veronica. Dirty blonde. Maybe 6.5/10.

Turns out she works one desk over. The three stand there shocked. They invite her in, all three are embarrassed.   She explains she just does it for extra cash. Lot of conversation, etc etc, agreed not to talk about it and they all parted but not before she had sex with both.

I would like a power rankings of who enjoyed their evening the most. If it's Veronica then I'll be honest guys that's a pretty naughty girl. The kind you don't want to be trading against during the day that's for sure.

Stolen Scotch - Was in NYC for a broker party and they rented out Le Bernadin (swanky ass french place) for a bunch of traders.  They had an open bar which to traders is like having an all you can smoke crack buffet to crack heads.  We drank so much they cut our dinner short and asked us to leave.  On the way out a trader from a hedgefund I know took a bottle that was opened behind the bar.  We passed it back and forth in a cab before getting to the next bar and tossed it in a trash can.  A few days later one of the brokers called me and asked if I saw anyone take a bottle, I didnt want to snitch, turns out it was a 5k bottle rare ass scotch.  Broker got stuck with the bill and we all swore never to speak of it again.

That's actually very awesome. I love rare shit. Even scotch and scotch fucking sucks I don't care what your grandfather did for a living or how influential he was in your life. Scotch sucks. But this scotch is awesome and I would have been the 3rd guy on that bottle in a heartbeat. Exclusive shit is the best.

Hookers You Don’t Work With - Was at a conference in Vegas and a trader I know didnt show up the next day to any of his meetings.  Turns out he got a hooker the night before, they robbed him took all his stuff (laptop, watch, wallet) and somehow blackmailed him into giving them everything in his bank account.  To make matters worse he woke up in a hallway with his pants off, no wallet, no phone and on the wrong floor.  Had to walk down in his boxers to the lobby of the MGM grand and get someone to let him in his room. Guy ended up going clean for several years, swore off booze

Hookers will do that to you. I got a buddy we'll call Joey that once got robbed by two hookers. Only thing is he didn't know they were hookers. They roofied him at a late night bar, gave him a very public OTPHJ and then got into a cab back to his place. He was passed out shortly thereafter and woke up with nothing in his wallet and and a bunch of shit stolen from his place. One thing missing was a gold AMEX card that he just got with a promotion. It was for business. His first call was to his boss to say he lost it within the first 48 hours. Which reminds me if you find yourself in a situation where you're about to double team a couple bonafide Bangbros candidates then you're probably about to get robbed.

Voka, Steaks, Cocaine and Heights -  I’ve been trading commodities mostly soybeans and corn for about 15 years.  My first year on the job I went to Chicago to visit the floor of CBOT and find out how it all worked.  It happened that it was the day that bonuses for the quarter were paid out so around noon we all left and headed to Ditkas steakhouse where one of the traders for XXXX had just gotten a check for around $115k and had gone to the bank and cashed it.  He then invited me and some random guys to have steaks and a few other things.

[Paragraph about illicit drug use in the middle of Ditkas]

We then head out and grab some beers and paper bag them walking around Chicago feeling like a million bucks.  Mind you I was a poor kid trying to learn the trade and just going along with the guys.  We get to the DuSable bridge on Michigan Avenue and the guy looks at me and says kid you want to make $10k… and I’m like “fuck yeah” alright if you jump off this bridge I’ll give you 10k.  Mind you this was in December and around 35, but I was like give me the money and I’ll do it.  Guys hands me 10k and I take off my shoes and shirt and jump in.  I barely made it back to the shore without drowning and had to scramble up the side to the waiting police officers standing on the shore.  I’m shivering shirtless soaking wet and holding 10k in my hand.  The cop just looks at me and sees my friends laughing and are like get the fuck out of here.  So that is the time I jumped off the DuSable bridge for 10k.

I told you guys Traders were the craziest. I wasn't joking. This is a casual Friday in December for these savages. Makes me wonder just how hard the quarantine is hitting their brains. This isn't a population of people that was meant to stay inside. All the reason for you guys to kill the boredom and send me your trading stores  carl@barstoolsports.com