(THR) — She came from Wisconsin to Los Angeles in 1994 at age 20 and named herself “Pantera Sarah.” Or at least that’s what the club kids started calling her when they learned of her love of heavy metal bands like Pantera. One of the most aggressive young nightlife promoters around the turn of the millennium, Sarah soon became, as Ryan Gosling once called her, “the midwife to L.A.” for a new generation of young stars. They were coming of age (and, often, blowing off steam) in Hollywood in the internet era, but the proliferation of gossip blogs and celebrity weeklies hadn’t metastasized into the morass of amateur media that smartphones and social networks would unleash only a couple of years later.

So when Sarah took her own personal pictures inside her clubs, as she often did, she captured her famous clientele in moments of public revelry that, for most stars these days, would be unthinkable. “This was like the Instagram of the day,” only private, says Sarah of her shots of actors like Vince Vaughn, Charlize Theron and Jamie Foxx who flocked to her themed nights at hotspots that dominated L.A. nightlife during that period.

Sarah, now 45 and no longer a promoter, says she took more than 15,000 photos during her nightlife run, a selection of which she shared with THR. “The reason we had a lot of people come to our clubs was because they knew they were safe,” she says. “Now it’s 20 years later, and most of the people I talk to have said, ‘Yeah, it’s fine’ ” to reveal the images. Together, they serve as a time capsule for a not-too-long-ago era that seems ancient because it’s pre-Facebook, pre-iPhone, pre-everything. A star could relax with friends at a bar without having to take fan selfies or prepare for a publicist’s angry call when candid images appear on Tumblr. “You just can’t do that anymore,” says Sarah. She would bar all cameras (except, of course, her own) from her clubs, but “you can’t say no to cellphones. It will never be the same.”

I have an ever changing, ebb and flow relationship with social media where I hate it then I love it to hate to love and so on and so forth. It’s undoubtedly my least favorite thing in the world and also the thing I am most dependent on. I have a similar relationship with celebrity culture where I like to pretend I’m above it but if you mention the Kardashians I’ll say, “Fuck them,” but in my head I’ll be thinking, “Come on! Spill the tea! What did they do this time?!” It’s a terrible, unhealthy, awful relationship.

And that’s why I hate this article because it seems so awesome and can never happen again. There used to be bars in LA that maxed out at 150 people and all of them would be celebrities? Beyonce would be dancing while Jay Z and Kanye rapped and Ashton Kutcher hung out in a booth and Prince sat in the back drinking water while observing? That sounds AWESOME. That sounds like the coolest night in the history of nights. I would make a promise to kill myself in the morning if I got to hang out in that bar for just four hours.

But all that’s dead now, thanks to social media and cell phones. Now celebrities can’t go out unless it’s in some uber exclusive booth that no one can see. That sucks so bad. Not just for us, not just for stories, but for them. Many years ago I went out in Newport with Gronk, I think Hank may have been there, and I got a little taste of what going out as a celebrity is like and it’s HELL. We went to West Deck, had to let them know ahead of time that we were coming, and the moment Gronk got there it ceased being a bar and became a zoo. Not a single soul was focused on doing anything but getting a blurry, zoomed in picture of Gronk. The dance floor went from being a dance floor to being an observation deck where people stood, gawked, and tried to snap photos. It was absolute insanity and Gronk had about one drink before he just went home. The whole bar looked like the Triple Crown Sports Illustrated cover, with Gronk playing the role of American Pharoah: 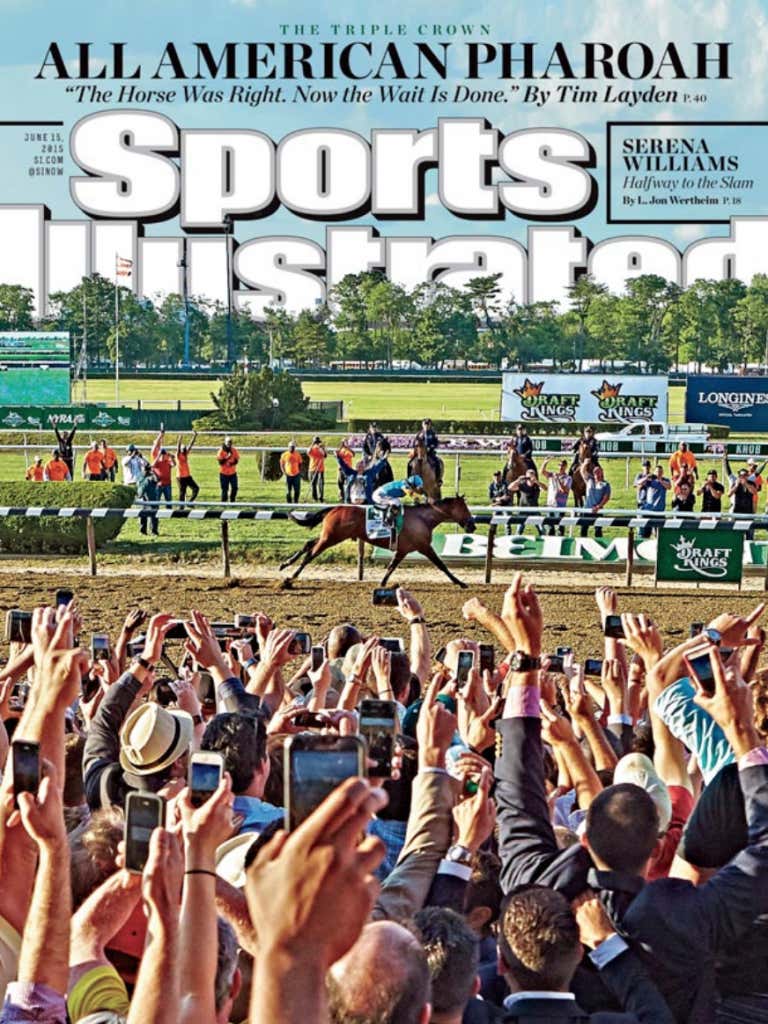 I hate just about everything about myself, that’s well documented, but I love that I never got whatever gene it is that makes people do stuff like that, try and get shitty pictures of people who are just trying to relax. Even as a kid I never took pictures and it took my mom grabbing my hand and bringing me over to Wayne Gretzky’s table at breakfast to ask him for his autograph (he only agreed under the condition his wife gives her’s too, so I have both their autographs on the same piece of paper). I’m lucky I don’t have that gene because guess what? NO ONE gives a shit. None of your friends care about seeing a celebrity on your Instagram story, they don’t care about 15 seconds of grainy sound from a concert, they follow you. They don’t follow you because you’re a well-known friend of celebrities and they don’t follow you because you’re a concert videographer, they follow for pictures of you. The celebrity photos they can see on TMZ, the concert footage they can watch on YouTube, so just have fun and focus on your night out. I’m trying to get some more JT/Britney/Gosling nights out. That’s what this is all about, really.

PS – I get that Pantera Sarah was an LA promoter/owner in the 90s and 00s but how the hell does that translate to getting to Obama’s birthday party in 2011? What a line here, from the article: Later, at President Barack Obama’s 2011 birthday party at the White House, Jay-Z tried to introduce Sarah to Tom Hanks, whom she already knew, by saying, “I got her club shut down.”