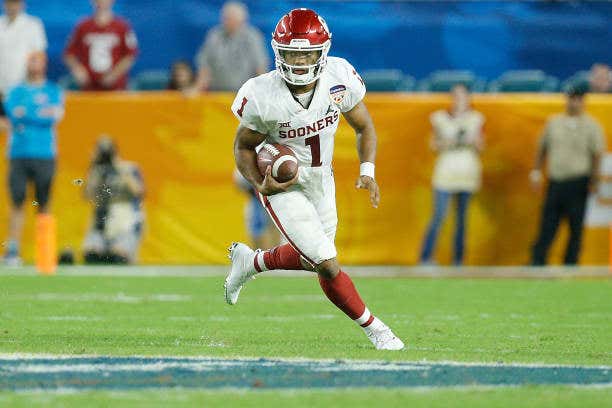 A little under a week ago, Gil Brandt tweeted out a little prediction for 2019:

Half of Brandt’s tweet has come true since it hit the internet. Now, what about Kyler Murray? Will he go and play in the MLB? Enter the NFL draft? Stay at Oklahoma?!? From Brandt:

SOURCE-“I hate to throw wild guesses out there because I think that’s the worst thing we do today,” Brandt told The Oklahoman. “And so when I put something up on my Twitter account, I really think it has an above average chance of happening.”

Brandt, 85, worked in the Cowboys organization from 1960-89. He said he knows Oklahoma coach Lincoln Riley as well as anybody in the business.

Of his three options, one will be decided by Sunday, which is the last day for a player to declare for the NFL draft. Matt Miller (NFL draft insider) recently said him declaring is a real possibility:

SOURCE-talk about Murray staying with football has been “heating up.”

Fellow podcast host Connor Rogers added “over these last 10 days it has gotten as real as it possibly can” in regards to the 2018 Heisman Trophy winner trying to play in the NFL.

The A’s are obviously hearing these rumors, as they are trying to entice Murray to stay with them:

Greg Papa (play-by-play guy for the 49ers, Bay Area sports insider) said today that there is a chance that Murray will stay at Oklahoma and play for the A’s in the minors:

SOURCE-“I’ve heard a lot of rumblings that he may go back to Oklahoma and play next year again, which would still allow him to play for the A’s in their minor league system,” said Papa. “You can be pro in one sport and amateur in the other, as we know. So, he may do that.”

I, for one, would LOVE to see Kyler Murray back on the football field next year. More specifically, I would love to see him with Oklahoma.

I don’t know where he would land in the NFL draft. Due to the lack of QBs in this draft, I could see him somewhere in the 1st round. Every player in the 1st round of the 2018 NFL Draft got at least 2X the money Murray received from the A’s (most of which is guaranteed). If he wound up getting drafted in the top 10, Murray could get anywhere from 18 million to 32 million. The financial decision would make sense if he was a top pick. It’s never been safer to be a QB in the NFL and if he fails at it, he can always go back to baseball. Doing the opposite isn’t likely. The climb to the top in baseball is a long grind, with a lot of luck involved. Once you get there, you don’t see a contract for what you are worth for another 5 or so years. Murray could have a career earnings of over 100 million by the time he got a contract in the MLB.

We’ll find out more by Sunday.