I’ve alluded to this story a few times on Red Line Radio and now that I’m full time it’s an appropriate time to tell the story fully and unabridged.

I went to North Central College in Naperville.  It wasn’t all that bad, actually a decent party scene.  Or as decent as a school of about 2500 students could be.  Good bar scene, house parties were okay, and yes we even had our fair share of good looking women.  I was also the best bullpen catcher and rocked the best Hawks playoff mullet of all time: 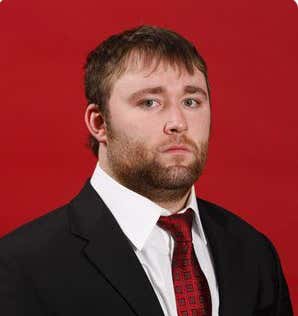 This picture was taken immediately after a 5am practice you dicks

After two years, countless underage consumption tickets and 1000s of baseballs caught in the bullpen, I’m down the home stretch to my 21st birthday.  It’s October of my junior year and as soon as clock struck midnight on 10/30, free at last free at least, thank god all mighty I’m free at last.  It was everything I’ve been working my whole life towards – legally consuming alcohol.

So 2 or three weeks before my 21st that year, I’m at a house party.  A friend of a friend was in attendance who had a random connection to Bobby Jenks.  An hour or so goes by and he walks up to me and says “Do you want to go to Bobby Jenks’ house?”  I go “fuck yes.”  He says “okay” and that we had to clear the party out.

The owner of the house was also a Sox fan and wanted in.  He said we first had to clear the party out.  Before even thinking of the best way to go about this I start screaming “COPS!!!” at the top of my lungs.  I looked out the front window and people were scattering down the street like cockroaches, hopping fences, etc.

After successfully clearing about 50 people out, we grabbed a garbage bag, loaded it with an assortment of Keystone, Busch and Natural Light left behind by people at the party, and piled in another buddy’s Chevy Trailblazer.  There were 5 of us total.

Bobby Jenks didn’t live far from us at the time – somewhere in Hinsdale off 55.  Made sense, easy/straight shot to the stadium from there.  We get there at about 12am, give or take.  It’s pitch black in a nice neighborhood and quiet as could be.  My buddy calls Bobby to tell him were there and didn’t get an answer.  We figured he had past out and were about to say fuck it and turn around.  At this point we’re all out of the car, milling around the hood and what not when I someone in in a black ski mask and black sweats pops out of the side yard.

I had NO idea what the fuck was happening.  After a second or two I look at the guy and he has a fucking loaded crossbow aimed at my face.  Once I registered what was going on, I quickly obliged and got on my knees.  I can’t believe I didn’t piss and/or shit myself.

“GIVE ME ALL YOUR FUCKING MONEY!!!”  He yelled, with the crossbow legit 2 inches from my left eye ball.  I slowly reach into my pocket and pulled out whatever limited amount of money I had in my wallet as a college kid.  Handed it to him.  “NOW GET ON YOUR FACE!!!”  I couldn’t have been shaking any harder.  He then rolled me over, ripped off his mask and started laughing.

“Ha, just fucking with you kid.”

It was Bobby Jenks.  Bobby Jenks was aiming a loaded crossbow at my eyeball and robbing me.  As soon as he knew that I knew it was him, he fired the crossbow over his neighbors roof.  Everyone laughs it off, Bobby to the point where he’s keeled over, in tears, and probably getting an ab work out.  I can take a good prank at my expense as well as anyone, so after my initial nerves wore off, I was laughing with them.

So he brings us into his garage, shows off his car collection (my favorite was the hemicuda) and directs us down to his basement. Remember that garbage bag full of cheap, shitty beer?  It’s now slunked over my shoulder and I’m walking it downstairs to Bobby Jenks basement.

Now, this was in the fall of 2009.  The White Sox just wrapped up a 79 win year (shocker) but were only a few years removed from their World Series title and a playoff birth in 2008.  Jenks was still a really good pitcher at the time, however, and a fan favorite.  He fit White Sox culture.  The fact that me, some complete bum, yet massive Sox fan was sitting in his basement was surreal to me.  We ended up getting comfortable and were just peppering him with questions about the 2005 team, his 100 MPH fastball, etc., all while crushing the garbage bag beer.

I must note that Bobby didn’t drink at this point.  Not sure what caused the Angels to release him in 2005, but it was always assumed that it was because of his drinking problem.  He didn’t consume a single beer that whole night.  But he had a collection of about 12 bottles of tequila that was specially made and given to him as a gift by the Sox front office.  He grabs one, explained that it was a gift, looked at us and said “you guys aren’t allowed to leave until you finish this.”

One kid was a DD so he didn’t touch it.  We casually started passed it around a few times, took pulls and chased it with our Keystone Lights.

In the midst of all of this, he gave us a tour of his memorabilia collection.  He had a table set up of about 2 dozen gloves, all engraved with his name.  He let us fuck around with them, put our hands in them, etc.  I asked him “how much for one” and he looks at me and goes “That’s the glove I was wearing when I closed out game 4 in 2005.  How much do you have in your pocket”.  It was about $80 which at the time was every cent I had to my name.  I said thanks but no thanks.  Fuck.

To this day I regret not saying fuck it and buying it.  It’s legit a piece of Sox history.  I was too poor at the time and too concerned with being able to afford booze/food until the next time I sold plasma.  I’m a fucking idiot, right?  It was legit this glove:

So we are there a few hours, pounding shit beer and expensive tequila, and he goes “okay, time to leave.  Finish up that tequila.”  We’re probably through about 1/2 of it at this point so we had some work to do.  I take one pull and it didn’t sit well.  It didn’t sit well for another friend either.  We both lean back and start control breathing.  I wish I could say I didn’t puke, but I was drunker than a skunk and puked my BRAINS out in his toilet.  One other friend did too.  Bobby is laughing his tits off the entire time.

At this point it’s probably 4am.  I must note that I had a tarp pull at 8am on our baseball field, followed by practice at 9am.  After Jenks tells us to get the fuck out of his house, we leave, I get home, and pass out.  I don’t remember the drive home at all.  My alarm goes off at 745 or whatever and I said “fuckkkkkkk the tarp” and slept in another hour.  We were a dog shit baseball program and I didn’t give a flying fuck about baseball at this point, so I didn’t even care.  I eventually showed up to the baseball field in baseball pants and my buddy’s size 13 Tracy MacGrady gym shoes.

I’m fully expecting this to be the most miserable day of my life and that I’m gonna be running poles hungover until I puke.  Nope, they wanted to set an example.  We had an inter squad scrimmage that morning, which I showed up late for, and as I drunkenly walk up to the field they have me get in the batters box without stretching or changing into cleats.  The coaches thought it’d be a good lesson to have our starting catcher pitch to me knowing I was drinking my balls off all night and skipping tarp pulls.

Why the starting catcher though?  He had the best arm on the team.  He never pitched for us, but sat 90ish off the mound when he would fuck around in practice.  He would have had a good D3 fastball if he had been a pitcher.

I get in the box, grab a 34/31 Demarini, feeling like absolute SHIT from the tequila and shit domestic beer I was drinking mere hours earlier, and sit on first pitch fastball.  He throws an 90 MPH-ish fastball right down the middle and I hit the farthest ball of my life over our left field fence.  Turn and burn baby. I knew it was gone the second I hit it and because they were fucking with me, I decided to take the longest victory lap around the bases in baseball history while wearing a pair of size 13 T-Mac gym shoes.  Here’s a map of where it landed: 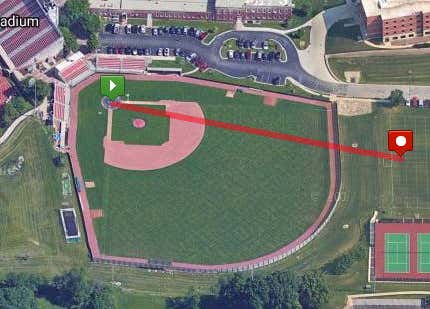 Everyone on the field was laughing their asses off but the coaches were PISSED.  As soon as I touched home they made me hit the track.  I did end up puking again later that day I was so hungover, but the story alone makes it worth it.  I know there are probably players at NCC reading this now.  Go Cardinals.  Tell Heller I said what’s up.