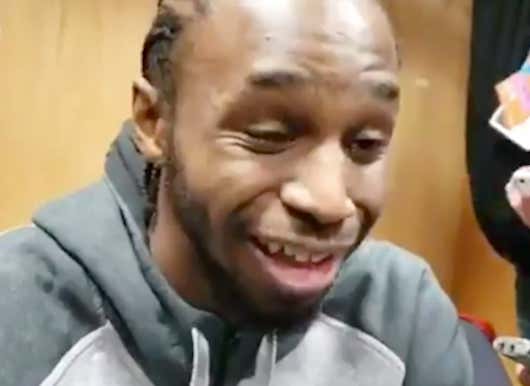 Schroder took issue with the Timberwolves when a number of players appeared to be laughing while Thunder center Nerlens Noel lay motionless on the floor from a scary fall. Noel took an elbow to the face from Wiggins while trying to block a dunk attempt. Schroder later got into a shoving match with Minnesota point guard and former Atlanta Hawks teammate Jeff Teague that resulted in an ejection.

Questions about Wiggins’ comments overshadowed his best performance of the season. The much-maligned wing totaled 40 points, 10 rebounds and four assists in a 119-117 victory against the Thunder.

Common mistake. Maybe everyone heard him wrong. Let’s listen to the press conference just to make sure…

Yikes. Yeah, no he definitely called him gay. Listen, I’m not the language police. I don’t care what anyone says because at the end of the day, if someone wants to say something stupid, that’s on them. But I will say that this is a bad look for Andrew Wiggins. Generally speaking, if you’re giving a press conference in front of thirty cameras and say something that’s been deemed offensive you shouldn’t deny it. You should do what Derrick Rose did and own up to it. And if you are going to deny it, you have to do better than that. “He was just getting” isn’t even a sentence.

No you don’t, dickhead. You’re not fooling anyone by including the ‘QIA’ at the end of LGBT either. The good news is we won’t have to hear much about Andrew after this because he’s going to spend his career rotting away in Minnesota. Again, great player, but kind of an idiot. Hopefully he gets fined and this serves as yet another reminder to athletes to stop saying stupid shit.