You never know who’ll be courtside at Los Angeles Clippers game. Last night, it just so happened to be not one, but two all time greats in the art of the sweet science: Floyd Mayweather Jr and Manny Pacquiao. This could’ve been a coincidence, obviously, but could there be something more to it?

If you recall correctly, just weeks before their first bout, buzz was generated by the two appearing courtside at a Miami Heat game, where they “just so happened” to run into each other…

…and late in 2018, after a brief confrontation at a concert in Tokyo, Mayweather explicitly stated that he would be coming out of retirement to face Pacquiao once more. 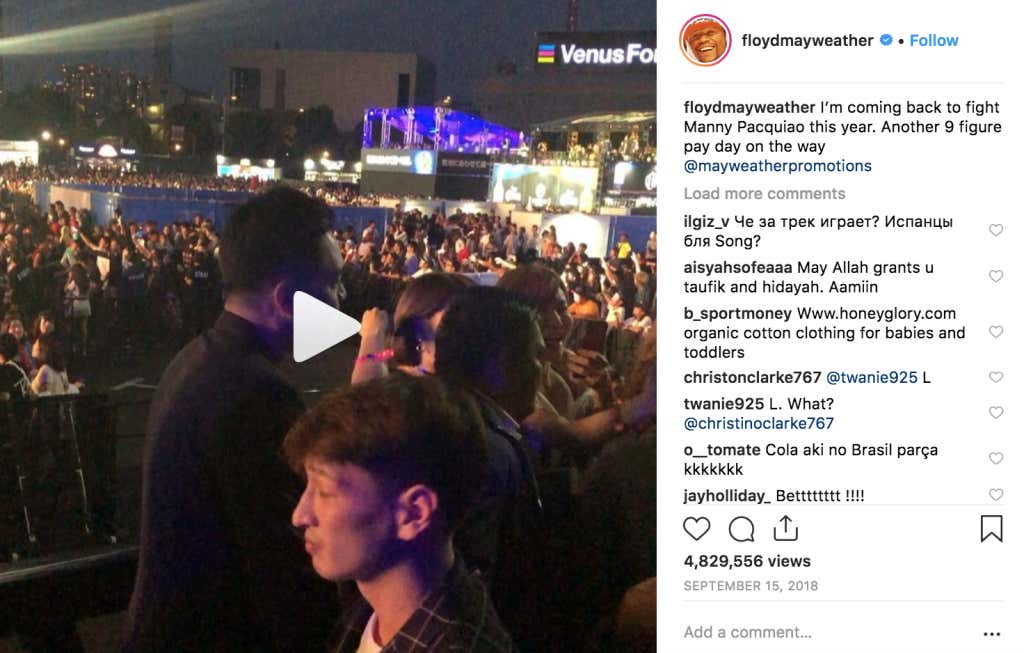 Floyd did say that the fight would happen before 2018 was over in that post, however, and that promise was clearly not kept, so take it with a grain of salt, I suppose.

Personally, I’m not interested in a second snoozefest between these two geezers just like you likely aren’t, but I do know it’s being talked about very seriously. I reported back in November that CEO of Mayweather Promotions, Leonard Ellerbe, met with the Pacman in New York to discuss the rematch before one of the Pacquiao/Broner pressers (a fight put on in association with Mayweather Promotions), and can absolutely confirm that was true.

One of the most interested tidbits I’ve heard about the production as a whole, though, is that Floyd Mayweather is well aware that it’ll be tough to get the masses to fork over another hundo, so FOX and a few other networks are in the mix for the rights to put the fight on for free which would (in theory) generate advertising revenue second only to the SuperBowl. Pac’s got Broner next, though, and Mayweather’s gotta sort out what he wants to do/his ShowTime contract before anything is made official, so that could all collapse in on itself as well. Who knows!