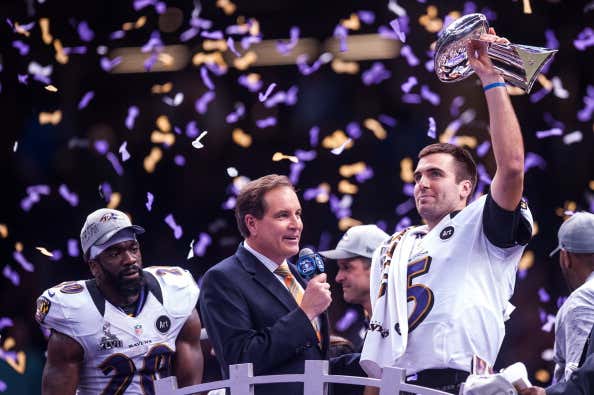 Nihilism – n???liz?m. noun – a viewpoint that traditional values and beliefs are unfounded and that existence is senseless and useless

As I’m looking at the eight teams remaining in the 2018 NFL playoff field, I can’t stop thinking about a time not too long ago when postseason football made sense. When there was an order to things. Where certain football truths applied in January and into the beginning of February and the cosmos was in balance. You knew what it took to win in the football playoffs and even with the occasional upset, the reasons behind it were sound and explainable.

That world no longer exists. To me it died with the 2012 Super Bowl champion Baltimore Ravens and nothing has made sense since. I’ll explain.

After the Ravens won the Harbaugh Bowl, I went back through their season and back about 10 years trying to figure out what, if any, common elements all the Super Bowl champions of this era. Simply put, I was trying to figure out what it takes to win a championship now. In that way the other sports have a few simple things you have to have. In the NBA, you need at least two and probably three superstars; there’s simply no secondary way to win a title. In MLB it’s changed over the years. But you still need two aces, an elite closer and power bats. To win a Stanley Cup you need two scoring lines and a hot goalie.

In the NFL, there were similar assumptions. For most of my life, winning a Super Bowl required a top three defense,  a Pro Bowl caliber quarterback and a running back who could give you 300 or so carries. The 2012 Ravens had none of those things. Not even close. In fact, this list doesn’t even begin to scratch the surface of how many myths they busted that I haven’t been able to put back together in the six seasons since.

Keep in mind as I list these, none of this is meant to put down the 2012 Ravens. On the contrary. Their trophy for Super Bowl XLVII looks exactly like the other LI the league has given out. They earned it. And in doing so, changed my world view. This is just me as a football fan trying to process what it takes to win in this league now, using them and the teams that have come since as a measurement. With that as a preamble, here are the busted myths:

Myth 1: To win a Super Bowl, you have to be hot coming into the playoffs.

After 11 games, the 2012 Ravens were coming off road wins at Pittsburgh and San Diego, sitting at 9-2 and had the inside track to clinch home field throughout the playoffs. Then then went 1-4 down the stretch to finish at 10-6. In a down year for the AFC North, that was still good enough to win the division. But in most major sites’ power rankings of playoff teams, they were 10th best out of 12. Similarly, the 2013 Seahawks went 2-2 in December, the 2014 Patriots lost twice after Thanksgiving, the 2015 Broncos lost back-to-back in the final month, and last year’s Eagles took Week 17 off, getting shut out by Dallas. Playoff omentum doesn’t mean jack squat.

The revisionist history of this particular team is off the charts. Mention their defense to anyone, and they’ll confuse them with the 2000 Ravens, who were among the best of the modern era. In fact, they were average at best. Tied for 12th in Points Allowed, 17th in Yards Allowed, 9th in Rushing Yards per Attempt and 11th in Passer Rating Against. Even worse were your 2011 Giants, who were 25th in Points Allowed, 27th in Yards Allowed and 21st in Passer Rating Against. The Eagles, Packers  and both Patriots defenses were good, but over the last decade or so, only the Seahawks and Broncos were what anyone could objectively compare to the great defenses that used to carry teams to titles on regular basis.

Myth 3: You need an elite quarterback.

Insert a Pardon My Take bit here, but Joe Flacco was not a particularly good quarterback all season. Name any passer category at random and I can all but guarantee he ranked in the teens among all NFL quarterbacks in 2012. Save for his Interception Pct, which was 6th, and Passer Rating, which was still an unelite 11th. As a team, Baltimore was 15th in Passing Yards and 20th in Passing Touchdowns. I don’t want to seem like I’m just picking on the Mannings because Eli was pretty much top six or so across the board in 2011, but at or below the middle of the league in everything in 2007, when the Giants as a team posted the 24th best Passer Rating. But without question, the worst quarterback of the 21st century to win a Lombardi is the corpse of Peyton the Broncos dragged to the title in 2015. He was 34th in the league in Passer Rating, ahead of only Ryan Mallett among qualifiers. And still a better option than Denver’s other starter, Brock Osweiler, who was 26th.

In terms of your basic run-stopping stats, the 2012 Ravens couldn’t have been any less special. Not good, not terrible. We might remember the primes of Ray Lewis, Terrell Suggs and Ed Reed, but this was not them. In Rushing Yards Allowed, Rushing Touchdowns Allowed and Average Yards per Attempt Allowed, they finished 13th, 10th and 10th, respectively. Which is still a damned sight better than the 2006 Colts, who weren’t just bad, they were historically bad, giving up a league-worst 173 Yards Per Game, which was 28 yards more than the second worst team.

Stop me if you heard this before, but the championship Ravens were a slightly above average running team, despite 1,000 yards from Ray Rice. Still better than the 2014 Patriots, who were a pass-first offense that finished 18th in Rushing Yards and only 23rd in Yards Per Attempt. Marshawn Lynch might end up in the Smithsonian as the last true bellcow back to carry his team to a championship.

Myth 6: You’ve got to spend money to win.

This was a pretty pervasive myth in the years after the Ravens’ championship as the Patriots began losing free agents like Wes Welker, Logan Mankins, Darrelle Revis and a half a dozen others. But that’s more revisionist history. The very reason the Ravens won is because they did not pay Flacco. They let him ride it out to the end of his rookie deal. And he won. Both the Super Bowl MVP and the Free Agency Powerball. And good for him. He gambled on himself and won. So they gave that man his money. $120.6 million, at the time the richest deal ever. And in the six seasons since, they’ve been to the playoffs once, went 1-1 and just had to use a 1st rounder on his replacement. I’m not saying they were wrong to let him play out his deal or re-sign him. Just that championships are won with low- and middle-income guys playing over their heads. You can’t buy a Super Bowl.

All of which means I’m damned if I know how the rest of this postseason is going to play out. It’s the worst, most obvious cliche in the world to say that it doesn’t matter how you played before, it’s all about just getting into the tournament and making plays. Because the playoffs are a whole new season (copyright Old Balls Productions, all rights reserved). But what makes it so intolerably bad is that it’s 100 percent correct. Baltimore was a struggling, slightly above average team when that postseason started, and just rose to the occasion. They made clutch catches. Played over their heads defensively. And didn’t turn the ball over. Which anyone in this field is capable of doing. It’s that simple. And that complicated. There is no other formula for playing well. No other essential element you need to win like in other sports. Even homefield only matters some. It’s a total random spin of the cosmological wheel. The Baltimore Ravens proved it, and the universe has kept making the point ever since.