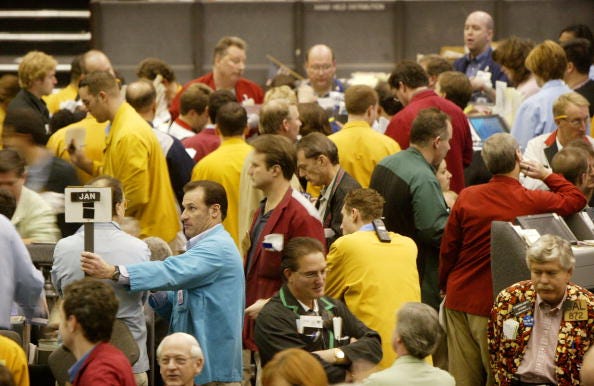 Last week I blogged a trader story that was floating around Chicago that highlighted some of the ridiculous behavior in and around the scene.  Anyone who has any friends or experiences know that traders are complete and total SAVAGES. Chicago guys raise your hand if you know this place: 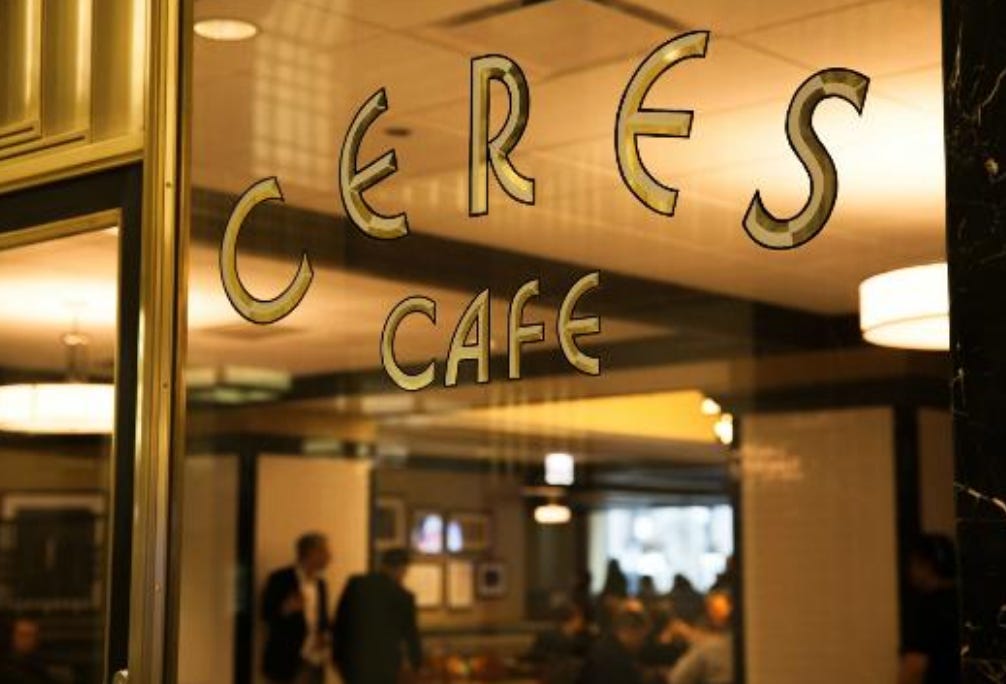 I used to work next door at 175 W. Jackson for the first 3 years of my career. It was notably awesome because you had immediate access to the best bar in the Loop hands down. One of the best bars in the city. Ceres Cafe is in the Chicago Hall of Fame. Order a double and they laugh. We only make triples. This is not a joke.

The first wave of traders come in around lunch and don't leave. They just post up at the high tables in the bar area and start slinging deep vodkas with a splash of cranberry just to let your liver know you're mindful of its labor. Half a dozen stiff ones later and the place is bustling. Wave after wave of guys coming in, all progressively younger than the last batch. The seasoned vets lead the way. By 4pm every pimple faced "new hire" is binge drinking away the shame and humiliation of making 5 coffee runs before lunch that day for your employers. All 15 of them. Just saying the word "Ceres" gets me jacked up. As long as the markets are open this place is ROCKING.

With that, I want to turn it over to the submissions I got this week from all our good trader friends. Some of these are in NYC, some in Chicago. Wouldn't mind branching into Singapore soon but not now. Point is this is to celebrate some of the bizarre trader industry behavior you've witnessed. Let's get to the submissions.

You're going to Kansas City: I had a buddy who was a junior trader at XX in New York. This was when we were right out of college.  Apparently his desk had a secret santa that they would do annually. There were two catches: 1) You couldn't spend over $100 and 2) You had to use whatever you got as a present. There were the usual sort of gag gifts. One guy got a big dildo.  One guy got a $100 gift certificate to a tattoo parlor. But the best one was one guy bought another guy on the desk a one way ticket to Kansas City the following Tuesday morning.  So the guy opened this up in front of everyone on the desk, so my friend said there was just no way of backing out without having everyone on the desk rip you. Not only did he have to take a day off to take the flight, it was now last minute and he had to spend $250 out of his own pocket to buy a ticket to get back to New York.

Fantasy Football leagues step aside. There's a new contender for brutal punishments and it's called your day job. Imagine that kind of work environment. Bad day? Steve in compliance just had to plug his ass on a Zoom happy hour. That's the kind of weirdos we're talking about.

In this case there are certainly worse punishments. But I imagine if you're a trader in NYC you probably think Kansas City is some 3rd world country. Just the nature of the beast to be that self absorbed.

Pencil Head: My old man traded soybeans open outcry in the pit of the CBOT from the '80s until its closure in the 2000s. He once told me he saw a guy get stabbed in the head with a pencil. He saw a bunch of guys go from broke to rich, right back to being broke.

Excuse me sir but your temple is bleeding.

I don't understand this but sounds pretty fucked: I had to work 3-11 this week and on shift change i was asking the overnight guy about the Ohare spread.  He’s been in the futures business for like 30 years and he asked if i heard about Zimmerman and Catalfo.  He was working at the firm where Catalfo cleared through during that day.  Basically two guys one with 30K and one with about 100 dollars in their accounts almost collapsed the bond market in 40 mins in 1992.  Here's what they did:

When the markets opened at 7:20, Zimmerman and Catalfo started buying every put offered in the pit, 25,000 of them. Put prices soared and the traders who sold scrambled to hedge by selling futures in the bond pit. Zimmerman, however, beat them to it. He was sending huge sell orders to nine different brokers in the pit, driving the bond prices down. At 7:30 the unemployment number came out and it was bearish. The market got another kick downward. Catalfo liquidated his position, netting $1.5 million. Zimmerman looked at the trades in his hand and saw between $3 million and $5 million in profits. He had built the whole Bruce G. Gould pyramid in 15 minutes. "I knew by then that Tony was at least a millionaire, so no matter what happened I would have half of that," Zimmerman says. "I started to buy in a hundred here and a thousand there. It was pandemonium all over….People were coming up to me and saying 'Excuse me, sir, who are you doing these trades for?' and all this shit, people who saw me on the floor for two years and never fucking gave me the time of day. I thought then 'I'm a multimillionaire. I control the market now. How many times is that going to happen in your life?' I started selling again to bury everyone." In all, Zimmerman controlled 36,000 contracts, leveraging $3.6 billion in bonds.

Free Ball Don't Lie shirt to whoever in the comment section can explain what the fuck is going on. All I know is that this is a life where you go to work one morning and end up leaving with 36,000 contracts and billions worth of bond leverage. Means nothing to me but at the same time it means everything to me. Just saying that out loud screams getting blacked out at a power lunch because you can.

Elsewhere, imagine collapsing any market much less an early 90's bond market. If that doesn't get your dick sucked then you're in the wrong business guys. Sorry.

You're A Moron: I have been in the futures biz for a little over 6 years. I am not from Chicago so when I first got offered a job as a clerk I had no idea what I was getting into. I was just told to show up to 141 West Jackson Boulevard ready to work. I put on my best suit and tie for my first day since I assumed that was the dress code for financial professionals. I walked up to the coat check and the attendant there handed me a yellow coat (clerk coat) that I held in my hand as I made my way up the escalators looking for the trader who had hired me on. As I walked passed the cattle pit another trader grabbed me. He looked me up and down for a solid minute. He asked , “are you circumcised?” I had no idea how to answer so I just stood there like an idiot. He then said, “because you look like a dick!” Needless to say that was the last day I’ve ever worn a suit to work.

Ah yes. The yellow coat usually means you have to be able to carry no less than 8 complicated Starbucks drinks at all times while also having regular access to various forms of tobacco on demand. But more importantly it means you have to possess the thickest of skins relative to your peers because you're about to be degraded. Big theme in this series is how the trader industry has been able to hold on to that longer than almost any other industry. And while often times it's fucked up, this is just a mild case. Maybe you really did look like a dick. As we'll see later in the series it can always be much worse.

Don't Brag About Your Clothes: I'm a trader at the CBOT. Just the other day some beat off in the Eurodollar Options pit was ranting and raving about how cool his new $3,000 ski jacket was, so one of the other traders sent his clerk down to the coat check and had him tell the guy at the desk that he needed to grab something from the douchebag's jacket.  Next thing you know we all get a video of some homeless guy strolling down Jackson in this asshole's jacket saying thank you for the free coat. Fuck that guy.

Like I said things could be much worse than being called a dick. Like this guy who is out a $3k jacket and a boat-load of pride, while also still being a dick. Not a good set of circumstances by any stretch of the imagination, but that's what you get for living the fast life. If he's a good day trader like we all should be, he found his value in the afternoon and bought a dozen of the same ski jackets for every asshole on his desk. That will show those bastards.

Elsewhere, I'd like to revive this series indefinitely so if you have some meaty stuff, send me an email carl@barstoolsports.com. All submissions are anonymous.