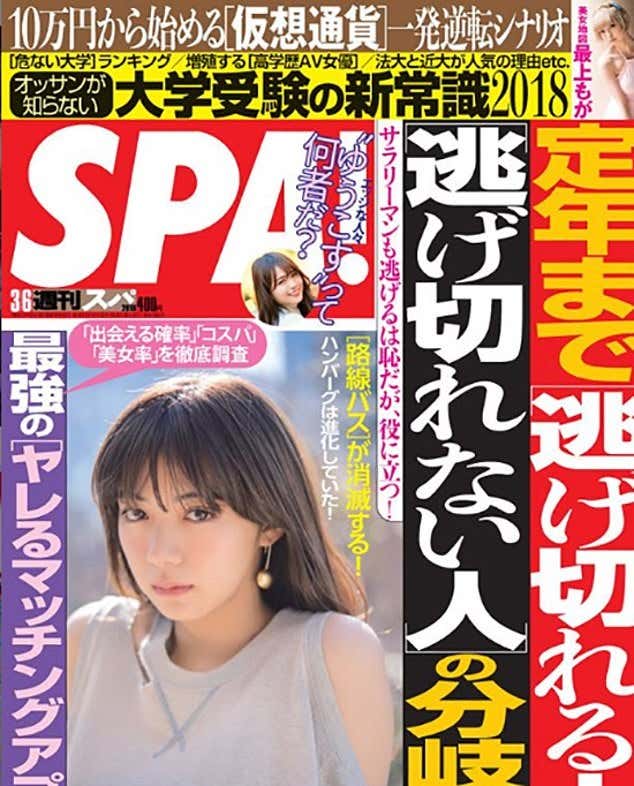 Source – A Japanese tabloid magazine apologised today for an article ranking women’s universities on how easy it is to convince students to have sex at drinking parties.

The backlash on social media came after the magazine Spa! published a list of colleges whose students were said to be ‘easily available’ for sex after drinking.

The list appeared in the December 25 issue of the weekly magazine and prompted outrage, particularly online where one woman launched a campaign seeking an apology and suspension of sales of the offending issue.

Her petition on the change.org platform accused the article of ‘sexualising, objectifying and disrespecting women’ and had collected support from more than 28,000 people by Tuesday. …

The article was about a practice the magazine described as ‘gyaranomi’ or drinking parties that male participants pay women to attend.

It said the parties are popular among female college students and interviewed the developer of an app intended to help men and women find potential attendees.

The interview with Keiji Isogimi, manager of the matching site Lion Project, ranked five colleges whose students he said were ‘sexually easy’ at parties.

He went on to describe how to ‘coax’ women and judge whether a woman is sexually available based on her clothing and appearance.

So what are we doing now? We’re demanding – and getting – apologies from magazines for treating female college students as sexual beings? Is that pretty much what it’s come down to? We’ve got people so fully invested in Victim Culture that they’re now trying to eliminate willing participation in sexual hookups.

I mean, note the clever and repeated use of the term “drinking parties.” Which until this exact moment in history were referred to as “parties.” Which, for the 28,000 misguided, judgemental buttinskis who took the time to sign this petition, are events human beings go to to enjoy themselves. Often with alcohol. Less often with drugs. And almost all the time with the hope of finding a sex partner, in either the short- or long term. And when anyone wants to go to one based on their chances of finding said partner, it doesn’t make them all Bill Cosby. Unless you are a self-appointed officer of the Fun Police, that is.

I guess I have to be the one to break it to the 28K, but college females are, in fact, sexual beings. So are college males. So are adult females. And adult males. And transgenders. And older, married couples, though not as much. (Take my word for it.) So are dolphins, beavers, wolves, ocelots, lobsters, cats and rats and elephants, and unicorns. And the one trait they all share in common is that they seek mates. Typically the males try to give off the impression they are strong, confident alphas who will provide an abundance of resources, and the females give off pheromones to attract the best one they can get. These busybodies might characterize that behavior as “coaxing” women and “judging whether a woman is sexual available based on her clothing and appearance.” But since that’s how it’s been done for about 100 million years, it’s a little presumptuous for them to try to stop it now.

To me, the key phrase in all of this is “the parties are popular among female college students.” Which I take to mean they show up, get paid to be there, dress how they want to dress, hook up or not hook up according to their wishes, and enjoy themselves. That, in a nutshell, is my kind of feminism. The very definition of doing what you want with your own body. That to me is empowerment. Or, to use an even better term for it, individual freedom. Which complete strangers want to take away on the notion that they might attract men with sex drives to those schools. Got it.

Instead of focusing on a real problem like unwilling sex and date rape, they try to throw everything out. In a world of Tinder and Bumble, let’s pretend that casual, commitment-free sex doesn’t exist and that anyone who suggests it might is a misogynist who’s promoting abuse in order to make a few SJWs feel they’ve done some good. A goofy article telling guys where the best parties where the odds are best for meeting sexually available coeds isn’t “objectifying and disrespecting women” any more than giving someone directions to the bank is promoting bank robbery. But sure, keep denying tens of millions of years of human evolution so you can prove how woke you are. And make publications apologize for an article that used to be a staple of old magazines like Playboy or Maxim before this Age of Tyranny began. Once again, I weep for our future.