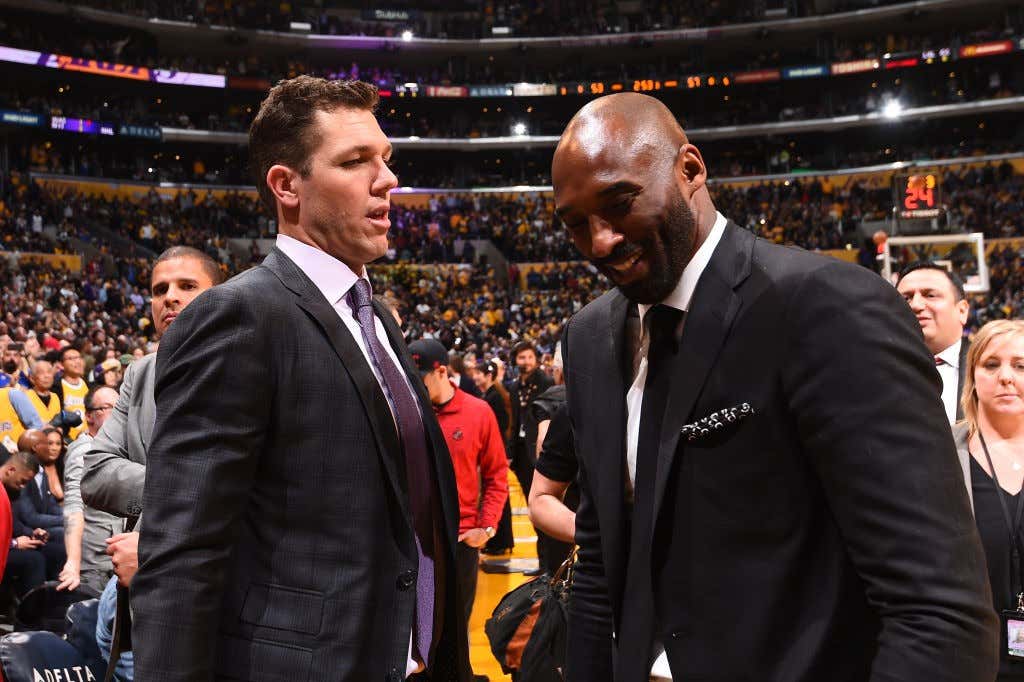 What is this? What are my eyes reading right here? Kobe Bean Bryant, a notoriously impatient dickhead, is preaching patience? That everyone should relax when it comes to the Lakers current struggles since the whole team is out? What kind of soft as shit is this from Kobe. Yeah I get it, LeBron is pretty important to this team and the main reason for their success, but this isn’t the Kobe I know and hate. There is no chance he believes a word of this tweet, there can’t be. The Kobe I know is already texting Rob Pelinka and Jeanie Buss about how Luke Walton needs to stop ruining this historic franchise. I know they were teammates and obviously have a relationship, but it’s also true that Kobe doesn’t really have a heart when it comes to basketball and only cares about winning. I’m to believe he’s sitting in his mansion watching the Lakers stink out loud, with their young talent underachieving and he’s just cool with it? Give me a break.

At the start of the season when the Lakers got off to a 0-3 start, Kobe went on TV and joked that if they got to 0-5 then he would entertain coming back. He was kidding, but at the same time on some level was dead ass serious. If you think he’s just going to sit back and not be a complete psycho in regards to this team I don’t know what to tell you. We’re only a few more losses away from hearing some rumors on Twitter about a comeback not as a player, but as a coach. You watch.

But in the meantime, let’s take a look at what Kobe actually said. That this team was playing pretty well before all the injuries. Again, since when has “pretty well” been OK for Kobe Bryant? On top of that, is it even true? When LeBron does play, the Lakers are just a +3.2 with him on the floor. When you look and the on/off splits it’s a pretty drastic drop which makes sense considering LeBron is the best player on the planet. But I care about the games he did play in for the sake of this exercise. From the start of the year until Christmas which is when LeBron got hurt, the Lakers had the 15th best offense in the NBA and the 10th best defense. If you look even closer, to this stretch of right before LeBron got hurt, the Lakers were 7-5 in the month of December before Christmas. That’s pretty good? Sad how much lower Kobe’s expectations are of this team now that he’s in retirement. A true killer on the court now has no problems with a 7-5 stretch and an average at best offense. That’s tough.

Kyle Kuzma has missed 2 games (played 16 min) in the one he got hurt, and while nobody loves Rondo like I love Rondo, he’s not even their starting point guard. If Lakers fans want us to believe Lonzo Ball is actually good, not having Rondo isn’t that much of an excuse either. I think it’s fair for Lakers fans to have a gripe with Walton, and while it’s not all his fault the proof is sort of in the pudding when you look at how bad they are without LeBron and then how bad they were last year with these same young players.

So seeing Kobe telling a Lakers fan to relax and be patient when it comes to this Lakers team winning and losing is laugh out loud funny. This is the same guy that I’m pretty sure would have you murdered if you screwed up or cost him wins, and now it’s like “eh whatever no big deal, it’s all injuries”. Old Kobe is so disappointed in Retired Kobe and it sure is a sad day for Lakers fans everywhere that he has embraced mediocrity like this.