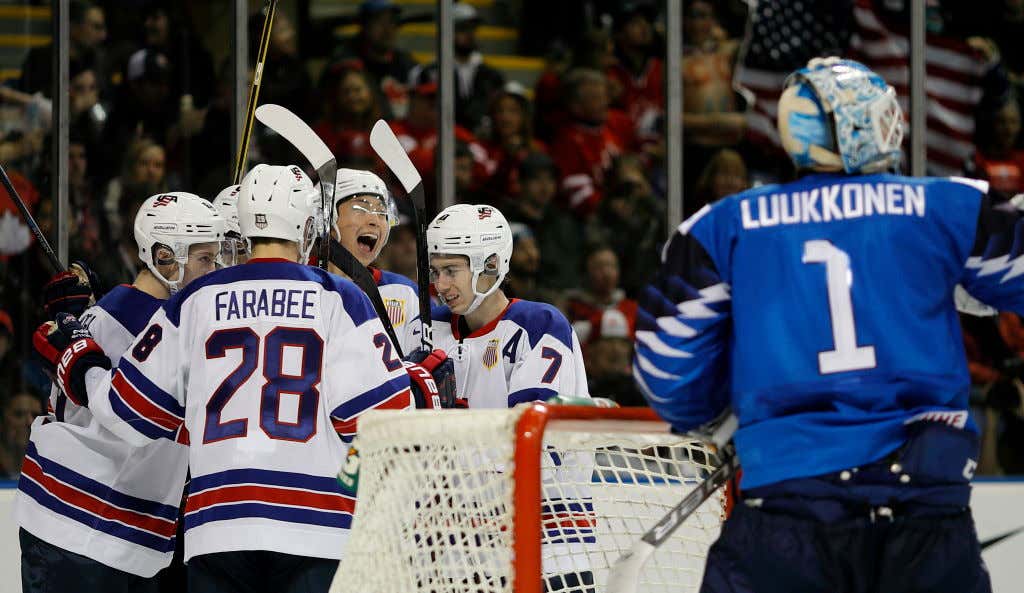 I’ve already written everything that you need to know about USA and Finland meeting up for the 2019 IIHF World Junior Championship gold medal game. There’s nothing more that needs to be said. The odds have shifted a little since this morning with USA jumping from -130 to -145, and Finland going from +110 to +120.

Personally I’d probably go USA money line and Finland puck line but I’m not going to be throwing any money on this game because I don’t want to risk mushing the very best boys that THE United States of America have to offer. But for those of you who would like to get rich whilst watching USA continue to add to their trophy case, there’s how you do it.

It’s a Saturday night so if you’re out at a bar, slip the bartender a nice little tip and get him to throw NHL Network on the TV. Hopefully you’re at a bar that would already have NHL Network playing anyway but I guess that depends on what part of the country you’re in. And if you’re watching the game at home like myself and you don’t have NHL Network in your cable package, well head on over to r/hockeystreams on Reddit for all the options you could ask for.

It’s been a helluva ride so far, boys and girls. Now let’s go finish it out on top. It’s time to kick some fuckin’ ass. And now the LIVE BLOG is officially activated.

Follow along on Twitter @BarstoolJordie for up to minute highlights/updates. And then I’ll be updating the blog at the end of each period throughout the game.

First half of the 1st period and I’d say that Finland probably has the advantage here in terms of possession and chances. Luckily Cayden Primeau looks pretty dialed in early on. But as somebody who really gets their rocks off to zone exits and zone entries, this move by Jack Hughes is my favorite highlight of the night so far. So slick. So smooth. Clean as could be.

But yeah, USA just needs to start making life a little more difficult for Finland through the neutral zone and they’ll be able to settle themselves in here.

Team USA gets the first powerplay of the night and in every single world except for this one, apparently, Oliver Wahlstrom gets USA on the board first.

But for some reason, the refs decide to call this no goal. Apparently they’re saying that Sasha Chmelevski was in the crease before the puck or some shit like that.

The IIHF officials and rules are the worst thing to ever happen to the sport of hockey. It’s an absolute joke. No idea how that’s not a goal but whatever. Puck don’t lie. USA will just have to win this game despite the refs.

The US got another great chance toward the end of the 1st period after this slick, slick feed from Logan Cockerill to Sasha Chmelevski…

…but unfortunately it was an even better save. And that’s how the 1st period would end. Scoreless after 20.

Still no goals in this game but this move from Joel Farabee that ended up drawing a penalty was absolutely ridiculous.

Nasty stuff from the future Flyer. 13 minutes to go in the 2nd period and still tied 0-0. But USA starting to rack up the majority of the chances.

Well shit. Finland wins an offensive zone faceoff on the powerplay and Jesse Ylonen absolutely murders this puck to open up the scoring in the final game of the World Juniors.

An absolute rocket there from the top of the circle. Nothing Cayden Primeau could have done about that one. And now USA will have to play from behind. Fortunately it’s just 1-goal and with how many chances they’ve been generating, I doubt that just one on the board will be enough for Finland to win this game. But obviously this shifts the mentality for the rest of the game.

And that’ll do it for the 2nd period. 40 minutes down. 20 to go. USA is getting plenty of chances but going 0/5 on the powerplay so far certainly isn’t helping. If anything, it’s giving Finland even more confidence. Need the boys to dig deep here during the intermission. 20 minutes to be heroes and it all starts with the next goal.

So the next goal was super important. Would have been great for USA to get on the board there and tie this game up at 1-1. But unfortunately, Otto Latvala was able to get this shot through a ton of traffic and it found the back of the net to put Finland up 2-0.

Seemed like a goal that would have deflated Team USA a little but just 61 seconds later, Sasha Chmelevski gets the Americans on the board with some help from Jack Hughes.

AND THEN JUST A FEW MINUTES AFTER THAT, SASHA CHMELEVSKI FINDS JOSH NORRIS TO TIE THIS GAME AT 2-2.

What a response from this American group. From down 2-0 in the 3rd period of a gold medal game to tied in no time. Unreal. No quit in this team. Fuckin’ right, boys.

We’ve been hyping up Jack Hughes vs Kaapo Kakko all day long. And in the end, it was Kaapo Kakko who put dagger in this tournament and scored the final goal with under 90 seconds to play to win the game for Finland.

I mean, listen. Obviously it sucks that USA lost that game. But with Jack Hughes taking the final shot of the game and Kaapo Kakko scoring the final goal, the 2019 World Junior gold medal game lived up to all the hype that went into it. Finland and USA are absolute powerhouses when it comes to junior hockey development, and this game was the epitome of that. And the rivalry between Kaapo Kakko and Jack Hughes is going to be so, so fun to watch over the next 15 years.

So congrats to Finland on winning the 2019 World Juniors. I predicted them to win silver before the tournament started and they one-upped me. That was a nasty ass team and they proved their dominance tonight. Unreal game that will go down as one of the better gold medal games in recent history. And now Finland celebrates.

Before I close this blog out, I just want to thank everybody who has followed along with my coverage all tournament long. It means way more to me than you guys could ever imagine. I love covering this tournament for all of you and I feel the love you guys give me back. Not to get too sentimental here but this is my favorite time of the year because I feel a lot closer to all of you. So for everybody who has followed along on the live blogs or followed me on twitter throughout the tournament, thank you. Because you make my job extremely enjoyable. See you all next year.