Source – A new plastic straw law had unexpected consequences when a man lashed out at a worker at a fast food chain.

The Florida man had just received his order at a McDonald’s in St. Petersburg on Monday evening. He became upset when there weren’t any plastic straws out at the condiment station, witness Brenda Biandudi told CNN.

By the end of the night, Daniel Taylor, a 40-year-old homeless man, would be arrested on two charges of simple battery, according to an arrest affidavit from the St. Petersburg Police Department. A lawyer for Taylor could not be reached Wednesday night.

I’ve said it once and I’ll say it again, you do NOT mess with fast food workers. They have nothing to lose. And that’s not a knock on them, that’s the truth. You could put a gun to their head and they won’t flinch. This lady has probably been waiting for someone to give her shit about the “straw policy” ever since the city put it into effect. What straw policy you ask?

“A city ordinance went into effect on January 1 that requires customers to ask for straws. It’s a way for businesses to adjust before a ban on single-use plastic straws takes effect in January 2020.”

Kind of bullshit, but I get it. The guy deserved everything he had coming to him. He didn’t even give her a warning or posture up, he just grabbed her and started jerking her around. Luckily, baby girl knew exactly what to do and started whaling on him like Ebony did to that poor girl who harassed her on the one train. She didn’t start the fight, but she definitely finished it. I mean her coworker literally had to pry her off of that guy. 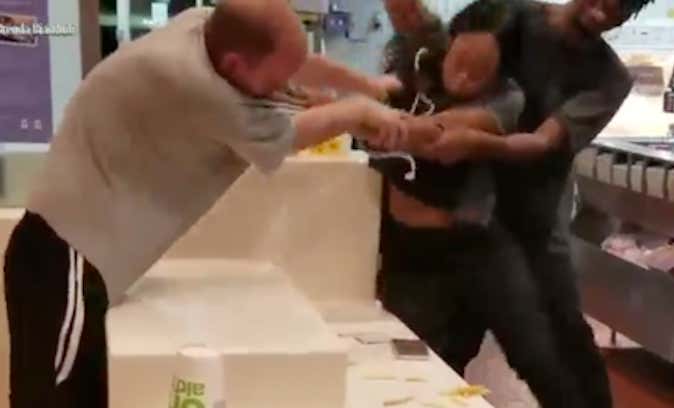 Also, is that not the most fast-food outfit of all time: gym shorts loaded up with all types of shit and a T-shirt. It may as well be the official white trash uniform.

To be honest, I don’t know what’s worse, the fact that this guy got so drunk that he tried to fight someone over a straw, or the fact that he got beat up so bad he went viral. The good news is he was blacked out, so chances are he won’t remember it. AND he’s homeless so he won’t be able to watch himself on TV. So, I guess it’s not all that bad. He still didn’t get the straw, though, which I’m sure will be a tough pill to swallow when he wakes up in jail.