Blogger's Note - I'm running this series back now that Barstool has a clear and vested interest in the stock market trading game. This blog was the 1st of its kind for me, which ultimately evolved into The Bookie Chronicles and then The Cheating Chronicles. Hopefully by now you know I love blogging stoolie stories. I've gotten requests over the last year to bring back Traders Are Insane blogs but truth be told I didn't have enough stories to keep up a weekly edition. So I pivoted to degeneracy and then back to cheating since I started. Everyone knows though that the Trader stories were by far the most ridiculous. So all that said, I'll repost the 2019 versions over the next few days and hopefully get some traction to pick the series back up should you guys be able to email me your trader lifestyle stories to carl@barstoolsports.com

Like I said, this blog is the 1st in the series. There's no stories yet. It's just me introducing the culture from my vantage point as someone who grew up literally in the middle of it. I'll circle back after lunch with Volume 02 that gets into the first batch of stories. Although admittedly now that the blog is subject to vague levels of public regulation, I might have to edit out some casual 1980's drug usage. Hopefully our compliance team already has a read on that. Until then, here's a brief yet insightful introduction into one of America's great cultures.

I present Traders Are Insane Volume 1: 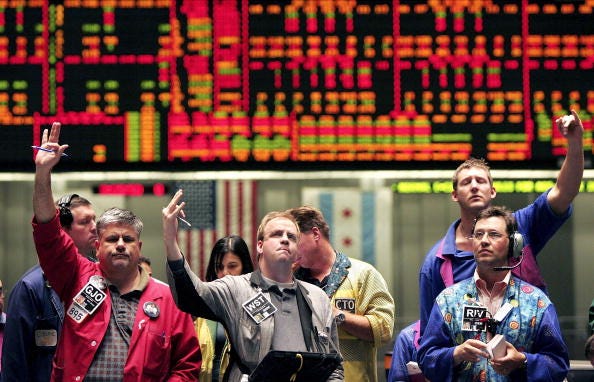 CNBC - Traders were already famous for risk-taking in the 1980s. But one bet is particularly absurd. Producers for an upcoming Showtime series used stories told by former traders in episodes of "Black Monday," premiering Jan. 20. Throughout the '80s, Chicago commodities traders were deploying something known as the "O'Hare Play." They would bet on a commodity like soy or wheat, then head off to Chicago's O'Hare International Airport. When they arrived, traders would check to see if that investment had paid off. If it did, they set out on a lavish vacation. If not, the trader would buy a one-way ticket and start a new life in a new city. "A lot of it seems crazy," producer David Caspe told The Washington Post. "But that's what was nice about setting it in the '80s — you could be broad and still be grounded."

The Chicago trading pits were the Wild West arm of Wall Street at the time, where there were often fistfights along with millionaires being minted. The CME Group closed down most of the famous floors using "open outcry" trading three years ago as computers took over, but in-person trading in some things like options still remains.

I grew up on the Southside of Chicago which is basically Mecca for CME traders. One out of every two friends "interned" in the pits through college which is a nice way of saying they got verbally and emotionally abused from 5:30am to 2:30pm each and every day by self-made millionaires with a 9th grade reading level. And let me tell you something. They LOVED it.

CME Traders are awesome. All they want to do is crush profits and ___________. You can literally fill in that blank with anything you want because legit anything goes.  There is no mission statement or higher purpose in work. They're not marching out their values at the company picnic. Just make as much money as humanly fucking possible and don't look back. The markets are there for your gain and someone else's loss - likely the Illinois pension system if we're being honest.

Reading stories like this makes me nostalgic for the time before my time. I love modern technology as much as anyone else and all the social advances that have come since the 80's. But there's something about doing a lot of drugs, mortgaging the farm on a lavish vacation and then going right to O'Hare to collect on your bet that strikes a chord with me. You think Sunday Night Football after a bad weekend is stressful? Try moving to Cedar Rapids, Iowa FOR LIFE because the price of dairy fell off a cliff one fateful afternoon. That's the fast lane. That's the good life.

Got a good trader story? Show me carl@barstoolsports.com