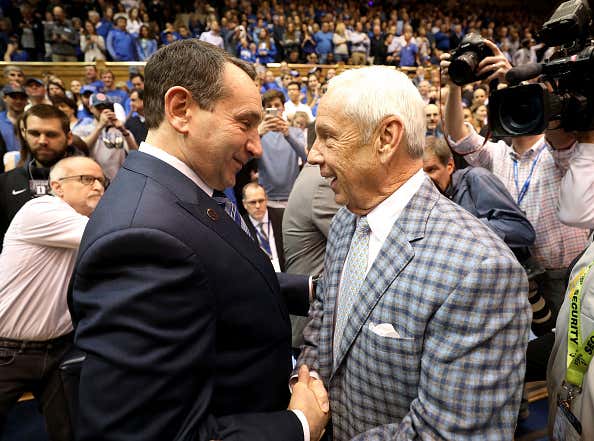 I know ACC play technically started back on the 1st, but we’ll focus on it moving forward now. I was worried about the Kentucky/Penn State game but we’re here now. We have one of my favorite teams in the country in NC State playing tonight so we’ll start there. Let’s get into arguing again.

1. Will Duke be the consensus national title favorite throughout ACC play?
I’m going to guess yes, but it’s a real thing to watch. We’re watching this group of freshmen now enter ACC play where they’ll see a bunch of different looks from teams that are more on their level than a majority of nonconference games. We’ll see them go up against a pressing team like Florida State, a packline like Virginia and Louisville, a 2-3 zone like Syracuse. As of right now, Duke is the consensus favorite to win the national title. But, with 18 games against ACC teams, will they still be that way?

2. Will Virginia change its public perception?
Right now Virginia may have the worst public perception for a great team. Everyone just thinks they are going to be a good regular season team and then flame out in the NCAA Tournament – mostly because of what happened against UMBC last year. They are exactly like Villanova pre-2016. But, what happens if they beat Duke and win the ACC regular season? Will people start to look at them differently in the sense that they’ll start to be talked about as a Final Four favorite? To me they are already there. I love this team and what they are capable of doing. Yes, you can point out the tempo, but remember, Nova won a title playing one of the slowest tempos in the country too.

3. Will Nassir Little’s playing time continue to be the most debated topic?
Now that Duke can’t go undefeated this has been the most debated topic that I can think of. If you haven’t paid attention to college hoops yet, the short story is Nassir Little was a top recruit, is a top prospect and is playing just 20 minutes a game coming off the bench. This is because Roy wants to play his traditional big with Maye at the 4 and Cam Johnson at the 3. It’s tough to justify starting him over Johnson right now since he’s been playing like an All-American, but Maye hasn’t lived up to preseason expectations. Little has made some freshman mistakes, but he’s also been playing limited time. It’s one of those things where the team has the most talent going small, but it takes away from what Roy wants to run. Will he start playing 25+ minutes per game? If not this will be the most debated topic.

4. Will Syracuse find any consistent offense?
Syracuse entered the year with expectations thanks to the Sweet 16 run and returning pretty much everyone on the roster. The one problem is Syracuse made the run as one of the last teams in the NCAA Tournament and it was wildly inconsistent offensively last year. That’s a trend again this year as Boeheim is continuing to run that ISO set and there’s a real lack of shooting despite Elijah Hughes joining the team. He’s the only person shooting over 32% from three this year. If Syracuse wants to make another run in the NCAA Tournament – but this time as a top-6ish seed, they need to find something better offensively.

5. Will one of the next three teams finish in the top-3?
The group of Virginia Tech, NC State and Florida State all should be talked about more. They are all top-20 teams in the country and it shouldn’t surprise anyone if they finish in the top-3. Virginia Tech has two stars in Justin Robinson and Nickiel Alexander-Walker. NC State has a duo in Torin Dorn and Markell Johnson that can attack pretty much anyone. Florida State is getting Phil Cofer back and have a bunch of depth to run that pressing and trapping style defensively. This is the group that helps make the ACC so good. Right off the bat you’re looking at 6 teams that are top-20ish in the country.