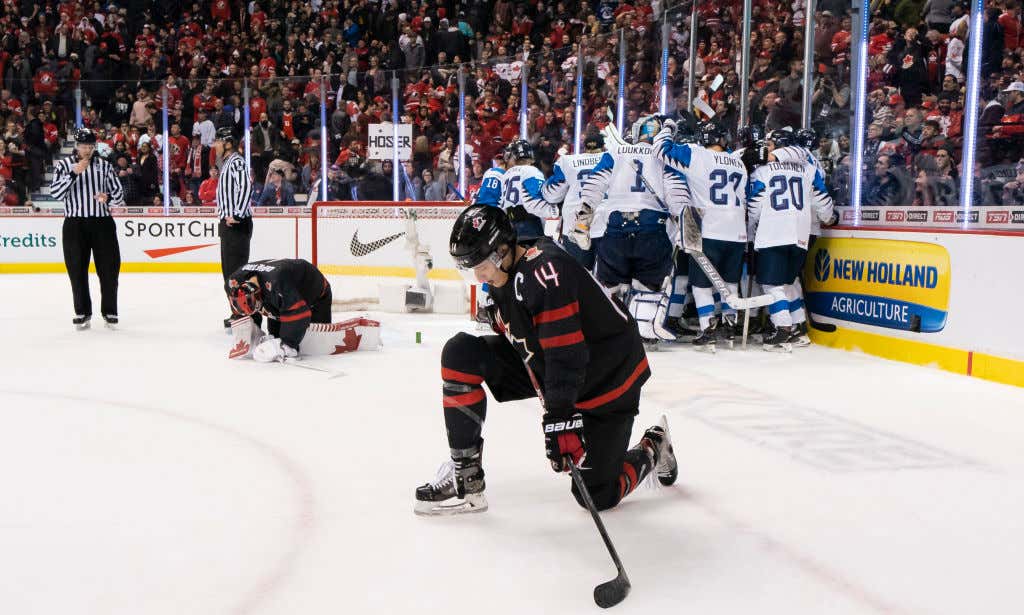 In case you missed it, the 2019 World Juniors Quarterfinals were last night. It was quite possibly the most unpredictable quarterfinal round in World Juniors history and the first two games of the night were both some of the most exciting hockey games you could have ever seen. As soon as the day started off with Kazakhstan getting a win in the relegation round, you knew we were in for a fucky night of hockey. So in comes quarterfinal game #1 between Sweden and Switzerland. You always have to admire the way the Swiss play in this tournament because they’re pesky little bastards and they’re never easy to play against. But I think everybody already had Sweden playing on Friday and were just worried with what time they’d be playing in the semifinals rather than if they’d be playing in the semifinals. That ended up being a big mistake as the Swiss pulled off a massive upset to send Sweden, last year’s silver medalists, home in the quarterfinals with no medal at all.

So the silver medalists were already bounced from the tournament in the first game of the quarters. Next on the schedule was last year’s gold medalists, Team Canada. They had a tougher draw against a Finnish team who I predicted would win silver in this year’s tournament. So obviously this game was never going to be easy but I mean…c’mon…it’s Canada. And in the history of this tournament, Canada has never not medalled in a World Juniors in which they are the host nation. So would the defending gold medalists bow out of the tournament in the quarters without a medal on their home soil? Get real. And you’d be right to think that if you only watched the first 59 minutes of last night’s game between the Canadians and Finns because up until there were 46 seconds left on the clock, Canada held on to a 1-0 lead. But this is the World Juniors. This is where magic happens. So with 46 seconds left on the clock…

There’s a man who goes by the name “Dave Portnoy”. Maybe you’ve heard of him before. Well Portnoy doesn’t know shit about hockey but whenever the Bruins are in the playoffs, he likes to go around just repeating the phrase “pucks on net” over and over and over again. It’s frustrating because even though he says it in a joking manner, it’s the absolute truth. If you just continue to get pucks on net, eventually good things are going to happen. And that’s exactly what Eeli Tolvanen did here. He didn’t have a real plan. He didn’t have a set move in mind. He just wanted to make sure he got that puck toward the front of the net, it took a crazy bounce at first off the back of the net and directly back on to his stick which proves that the Hockey Gods were in Finland’s corner last night. And then the second attempt bounces off Aleksi Heponiemi and in the back of the net to tie the game at 1-1. Absolutely insane series of events right there.

So the game goes to overtime but that doesn’t mean it’s over. That doesn’t mean that Canada won’t be advancing just because they gave up the lead in the final minute of the game with Finland’s goalie pulled. Sure, it sucks for them that they didn’t win in regulation but again, this is Canada and they always medal when they host the tournament. So we get to overtime and it looks as if the stars will start to align for the Canadians again as they are awarded a penalty shot in overtime. Now the IIHF rule is that anybody on the team is able to take the penalty shot when one is awarded. So even though it was Evan Bouchard who was awarded the penalty shot, Team Canada decided to go with captain Max Comtois–who also serves as the captain of the Canadian Olympic diving team.

Now I’m sure that every single youth hockey player in Canada dreams of this moment. Being the captain of Team Canada at the World Juniors. The game is now on your stick with a penalty shot in overtime. Playing in front of your home crowd. The stage was set for Max Comtois to become a Canadian legend. And then…

Alright so all jokes aside for a second here, you have to feel terrible for Comtois. I mean I don’t like the kid as a hockey player at all and I think he plays a pretty shitty game. He dives, he takes runs at guys, he’s just the type of hockey player who you find yourself rooting against. But he’s still a 19-year-old kid who just failed on what was probably the largest stage he’s been on so far in his career. For the captain of Team Canada to go out there and not score on a penalty shot in overtime of an elimination game at the World Juniors? That’s the type of shit that stays with you for your entire career. So you have to hope it doesn’t have too much of a mental impact on his game in the future. However, it’s going to be pretty hard to move on from that moment too quickly because what happened next just sinks that dagger in even deeper.

Noah Dobson sluffs in. He’s wide open on the back side with basically an empty net to shoot into. All he has to do is get some decent contact on the puck and it’s in the back of the end, Canada’s potential disaster is avoided. But instead, Dobson goes to take the shot, his stick snaps in half, Finland takes it down the other end of the ice and that’s all she wrote.

I mean…holy shit. If you didn’t believe in the Hockey Gods before last night, you better damn well start believing in them now. Between the tying goal in regulation, the botched penalty shot in overtime, and then the broken stick a few minutes later? The Hockey Gods were out to get Canada in that game and Don Cherry called it.

But the rest of us who aren’t Canadian get to thank the Hockey Gods for their work because that was one of the most exciting finishes to a hockey game you could ever ask for. Finland was 46 seconds away from going home. Then they were a penalty shot away from going home. And now they’re advancing to the semifinals to face Switzerland after the Swiss pulled off a major upset as well against the Swedes. Unbelievable.

It’s just a shame because I know the World Juniors is picking up in popularity here in the States as the years go by. But it still doesn’t get nearly the amount of attention it deserves. I mean there are so many people out there who willingly chose not to watch one of the most exciting nights in sports last night. And for those people? I just feel truly awful for them. Because they’re missing out on something special.

As for the other games last night, USA beat the Czech Republic 2-1 and they’ll face Russia in the semifinals after the Russians beat Slovakia 8-3.

P.S. – They say that a picture is worth a thousand words?

This was was worth approximately 1,210 right there.