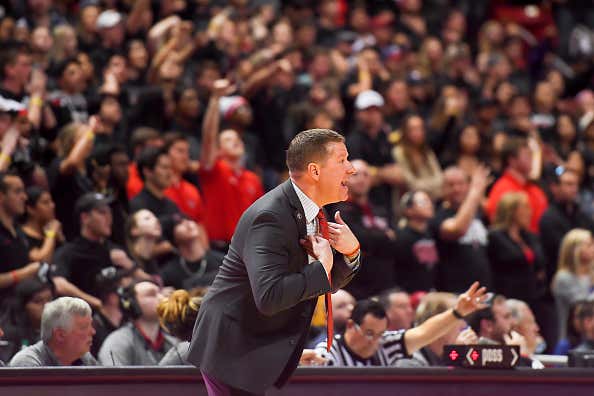 We’re back with another conference starting play today as the Big 12 – arguably the best conference in America – tips off tonight. I mean let’s be honest, it’s the first day back for a majority of people in the cubes, you’re not really wanting to work. Let’s get into some basketball arguments instead.

1. Is this the year for Kansas to finally lose?
Every year this will likely be the No. 1 storyline in the conference. Well, that will be until Kansas finally loses the regular season conference championship. They have looked vulnerable this year, but you still have to go into Phog Allen and get a win. You still have to deal with guys like Dedric Lawson and Udoka Azubuike. There’s only two teams that I think have a shot at possibly beating Kansas and that’s Iowa State and Texas Tech.

2. Will Kansas State be able to overcome Dean Wade’s injury and a poor resume?
Kansas State entered the season ranked in the top-15 of preseason polls. Most of that was due to the Elite Eight run last year without Dean Wade. Most thought the return of that roster and Wade would make Kansas State a top team. That hasn’t been the case. Yes, they are 10-2, but they have just 2 top-100 wins and none are ranked higher than 58. That team was Vanderbilt, who is playing without their best player, so expect that number to fall. Kansas State’s nonconference wasn’t exactly stellar with a loss to Tulsa and no quality wins. Good news is they will have about 18 chances for quality wins in conference play. Bad news, they are still playing without Dean Wade who suffered a foot injury.

3. Iowa State is about to get added depth and a whole lot of talent
One of the teams flying under the radar is Iowa State. This team is damn good and they are about to get better. So far this season Cameron Lard, Zoran Talley, Solomon Young and Lindell Wigginton have barely played. Only two have played in 5 games. Young has played in just 1. These guys are all returning and adding depth and talent to a team that is already loaded. Mixing in these guys should only help the Cyclones, but it will take a few games for the chemistry to really hit. That said, this is a team that’s currently ranked No. 18 on KenPom with no bad losses during the nonconference play despite the short roster. They have a chance to be a top-3 seed in the NCAA Tournament.

4. Can Oklahoma continue this start?
Oklahoma is in the conversation for the best resume in college basketball right now. They have one loss – to Wisconsin on a neutral court. They have wins over Creighton, USC, Northwestern, Florida, Wofford, Notre Dame and Dayton. This is all after losing an All-American and their best player in Trae Young last year. That’s because Lon Kruger is one of the more under appreciated coaches in America. Another reason why is the No. 7 defense in the country right now. There may not be a bigger surprise than this team in the country.

5. Will Shaka Smart be on the hot seat?
Shaka Smart’s hire at Texas was met with great expectations and a lot of fan fare. Shaka Smart’s time at Texas has been a whole lot of average. There really isn’t a season that fans can point at and say that’s the one that made us remember the Smart-era. He doesn’t have those strings of great wins. He doesn’t have a run in the NCAA Tournament. Texas is now sitting at 8-4 with home losses to Radford, VCU and Providence (without AJ Reeves). What happens if Texas barely makes the NCAA Tournament and loses in the first round? What happens if they finish 8th in the conference and miss the NCAA Tournament?