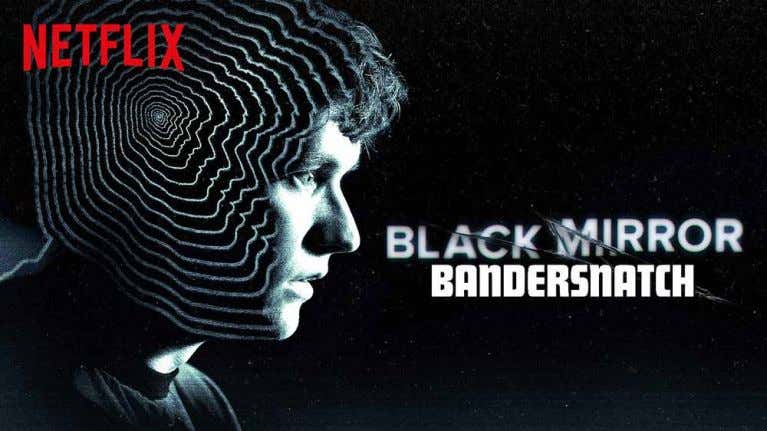 In fact, here, play this on loop as you continue reading.

There will be spoilers in this, but nothing could spoil anything more than Bandersnatch spoiled my holiday break

Here is what I have to say:

If you love video games and wish that you could transform your TV shows into something you’d play on your XBox to consolidate your interests, then Bandersnatch is the show for you.  It’s a “new” technology.  You can make choices and influence storylines.  You can spend an entire day making different decisions and seeing where it all ends up.

If you like watching a TV show and enjoying it, this ain’t it chief.

It is, without a doubt, innovative.  It’s something we’ve barely seen before, definitely not to this extent.  Ever since I heard of the conceit of a “choose your own adventure” viewing experience, I was disappointed.  I knew I wouldn’t like that aspect of it.  I totally get it if you were.  Matter of personal preference.  So while I was anti-CYOA from the start, what I WASN’T was anti-the episode in general.  I thought, just like all 4 seasons of Black Mirror, that it would be awesome regardless.  I thought they’d use the little gimmick but still make it as incredible as they always do.

It was not incredible and it was not awesome.  It was lame, corny, and so below the standards of the stories they usually tell that I actually reconsidered if I was even a fan of the show at all.

The worst part?  It’s not even saying anything new.  The themes are tired and overdone and cliche.  Did you know that we all watch too much TV? Did you know that Netflix uses a bunch of algorithms to keep you endlessly entertained to the point where you don’t even sleep anymore?  Is that something you read an article about like 3 years ago?

Have you heard about how the government controls all of us, uses mind control, alters our perception? Have you wondered if therapy and psychoanalysis and medication actually works?

What about free will.  Did you know that some people think there is such a thing as free will, and some people think everything is already determined no matter what path you take?  Did you know people think there are bajillions of alternate universes where every decision you make creates another world where you did the opposite?  Maybe you’ve seen it in a movie or 2 or 100 over the past 50 years.  Maybe your stoned friend in college paused between gas mask bong rips to tell you his theory on existentialism and predetermination and autonomy.  They’ve been talking about this since Greece in the 6th century BC.  Trust me, I took Philosophy 101 13 years ago.  Augustine basically developed Western Christianity with this stuff.  Ever read the Bible?  It’s that book they read from at weddings. “He predestined us to adoption as sons through Jesus Christ to Himself, according to the kind intention of His will.” —Ephesians 1:5.  Jews believe humans have free will because God gave it to them.  Islam is split between the “divine commanding power” of God, and the idea of free will that only happens with the permission of God.  That’s the extent of my knowledge of religion but I’m sure you can Google the other ones.

Basically the central theme to the episode is determinism vs. free will.  Only one course of events is possible, or we are free to make our choices.  I mean you are literally making choices in the show.  It bashes you over the head.  In a way you can determine whether the main character ends up dead, in jail, with all his work lost from his tea, or happy on a train with his mom (or is it really his mom at all?)  That is all a lot more meaningful if there are 3 or 4 decisions that you make at crucial parts of the story: kill your dad?  Jump off the roof?  When you have to do it 500 times about Frosties cereal and whether to bite your nails blah blah blah, it loses its luster real fast.

I get it: it’s a proof of concept.  It was the introduction of a new construct that, unfortunately, I’m sure is going to be the future of television.  My Twitter guy @Brianlepro makes a great point – it’s not even lumped in with the Black Mirror section of episodes.  It’s a separate entity on the Trending page.

It’s super-meta.  In my opinion, to a HUGE fault.  The computer screen typing out “I am Netflix, a streaming service from the future” is some megameta shit that breaks the fourth wall.  That doesn’t mean it isn’t corny as hell. (Don’t even get me started on the therapist with the nunchucks.)  Even the choices you have to make get increasingly lamer: the series of “FUCK YEAH,” “FIGHT HER,” “KICK HIM IN THE BALLS” was groan inducing.

Here are some not-so-bad parts so that I can start 2019 off with at least a little bit of positivity:

-When the camera panned back and you see that the dad is really a scientist-type guy and it’s all a TV show (meta!) or experiment or whatever, THAT is very cool.  THAT is a conceit for a full Black Mirror episode right there.  That says just as much about free will as all of the choosing adventure shit does.  That Stefan thinks he made the choice to inadvertently kill his mom by looking for his rabbit, which in turn shaped his entire life, when really he was conditioned since birth to make that choice in the first place.

-Colin’s Pac Man monologue.  That was actually super interesting.  That was something that, if my gas mask bong friend mentioned earlier was saying, I actually wouldn’t roll my eyes.  That PAC man means “Program and Control.”  That Pac Man thinks he has control of what he’s doing, when he’s really trapped inside a construct where all he can do is eat stuff in a confined space controlled by another human as he’s chased by demons, real or imagined. He dies all the time from his (but not his) decisions, then just comes back and tries again. THEME ALERT: We’re all living in a Pac Man world.  (This reviewer completely missed the point of that one – the writers don’t actually think that’s what it stands for.  It’s a theory put forth by a TV character who is tripping on acid.)

-The parallels between Jerome Davies and Stefan.

-The therapy + medication + trauma aspect.  Mental health is a huge topic right now, as it should be.  I know it doesn’t make for the most exciting entertainment but the conversation about how events in our childhood shape our psychologies, the effectiveness of SSRIs etc, and the difficulty in finding a therapy style for a problem you can’t actually see is all interesting – and necessary – stuff to explore.  Of course, when the therapist turns into a fucking ninja that all kind of goes out the window (almost literally.)

-The Easter Eggs.  These always overwhelm me, just like reading LOST theories used to.  Here’s a good list of them from EW.

But that’s about it.  That’s not enough positive for a 300 minute Black Mirror.  That’s some cable TV shit.

And I don’t believe this is a “high horse” opinion.  I’d argue it’s literally the exact opposite.  It’s like the most dumbed down reason for a show ever: “I wasn’t entertained.”  I didn’t have fun watching this and I did not think any of the interactive stuff was cool.  When I berated KFC for not liking Metalhead because he didn’t get it – that was high horse city.  I got Bandersnatch and I don’t care about what I got.

Black Mirror’s absolute BEST quality, through 4 seasons, has been that it says something interesting.  About technology, about how it affects us, about how it’s going to change (and is changing) the world, about the dangers we face being so consumed by our screens.  We’re already seeing it with social media obviously, but they still have found a way to make it even more threatening. There have been some misses obviously – and a couple HUGE misses- but the vast majority of episodes are gripping and scary and total mind-fucks in the best way possible.  Some of them are awesome because they make you feel like part of the “in crowd” of pretentious TV people – “I get it!” Some of them are awesome because they’re just cool and entertaining.  It’s just a good TV show all around.