Original Post Date: December 30th, 2018 – Bumping for those who may have missed.

Dana then shit all over Darren’s assessment, asking, “Da fuck does Darren Rovell know about fighting?”

Rovell went on to argue Cris Cyborg’s marketability over Amanda Nunes’, and even mixed it up with KFC this morning on the subject…

I don’t even know that much about Rovell, honestly. All that I know is from office chatter, or from Pardon My Take, and before last night, I had him muted on Twitter despite never interacting with him ever because I just kinda couldn’t stand the guy’s better-than-you attitude.

After last night though, I’d say I’m as frustrated as Dana White with Rovell, because any self-respecting journalist in his position – after seeing the influx of the credible names disputing his blatantly false and misguided breakdown of Nunes’ marketability – would lick their wounds and say, “Hand up, maybe that was a bad take. I didn’t have all the facts.” It happens! Happens all the time on Twitter dot com. And it’s okay. BUT, instead, he chose to talk down to those criticizing his moronic comment in classic Rovell fashion…

Now this is what really pissed me off. You can’t have this know-it-all attitude about this if you know next to nothing at all about what you’re talking about. You can’t use the classic “Sorry the truth hurts your feelings!” line if the truth just isn’t there, and hide behind some mysterious “data” without showing your work. I don’t claim to know any more about business and marketability than he does, though, so let’s just lay down the facts about Cris Cyborg and Amanda Nunes and look at them objectively.

Obviously, you see a STEEEEEEEEP drop from the back-to-back million-plus shows down to the hundred-thousand, and eighty-five thousand buys that UFC 215 and UFC 224 did. You can attribute that to a few things, but to simplify it – Nunes wasn’t the draw for UFC 200 or UFC 207. Brock Lesnar, Anderson Silva, Daniel Cormier, Miesha Tate, Jose Aldo, and Frankie Edgar were all on the UFC’s historic two-hundredth pay-per-view along with Nunes (who wasn’t supposed to main event the show in the first place), and they were the draws (mostly Lesnar tho). Then, Ronda Rousey was obviously the draw for 207. From the promo videos leading up to that fight, you’d think Nunes wasn’t even fighting, and that was heavily criticized at the time.

Here’s the live-attendance gate for those Nunes-headlined shows as well:

On the flip side, Cris Cyborg has headlined two pay-per-views: UFC 219, and UFC 222. Here are the pay-per-view buyrates for those events:

Both pretty respectable buyrates, ESPECIALLY in the modern era, but looking a bit deeper into them (which I assume Darren Rovell hasn’t), it’s pretty apparent that Cyborg wasn’t the sole draw for either.

For starters, Holly Holm proved herself to be a draw after knocking out Ronda Rousey at UFC 193 back in November of 2015, and put up 4,687,000 viewers in the final three rounds of her bout with Valentina Shevchenko in 2016, some of the best anybody in the UFC had ever put up on FOX. I remember at the time, it was a top five highest viewed main event for FOX, and I would be stunned if it were knocked out of, say, the top ten since then. Whereas Cyborg on free television against Lina Landsberg in 2016 did just 1,326,000 viewers. Holm vs de Randamie also put up 200,000 buys on pay-per-view (Anderson Silva was in the co-main as well), something it had NO BUSINESS doing for a card as bad as UFC 208’s, and that is admitted by even Dana White. So yes, 380,000 buys is great, but cannot be all attributed to Cris Cyborg. It was the combo of the two, promoted as a “superfight”.

Next, looking at UFC 222 – a show originally headlined with a UFC Featherweight Championship bout between Max Holloway and Frankie Edgar – Cyborg vs Kunitskaya was actually sort-of a last minute replacement main event for the pay-per-view, booked well after the large-scale marketing for it was underway. To add to that, buzz around the show was built even more when the UFC reported that they were targeting a rematch between TJ Dillashaw and Cody Garbrandt for the main event before TJ turned the bout down and the UFC found and signed Yana Kunitskaya from Invicta, a “worthy” challenger for Cyborg’s 145lb championship. Still, putting up 260,000 buys is impressive here, so I’m not going to take that away from her. I think this show actually does prove Cyborg to be a draw, even with familiar names like Frankie Edgar, Brian Ortega, Andrei Arlovski, and Sean O’Malley on the card, the caliber of which neither UFC 215 or UFC 224 were afforded.

Here are the live-attendance gate numbers for those shows:

From these figures, you’d have to concede to Darren Rovell that Cris Cyborg, historically, has proven to be a bigger draw than Amanda Nunes. That’s undeniable, and not what I’m taking umbrage with. My issue stems back to that “Brutally damaging to UFC.” line, once again. Because it’s just not.

You’re trying to tell me that 30-year-old bilingual Brazilian native Amanda Nunes, now the UFC Women’s Bantamweight (135lb) AND Featherweight (145lb) Champion, the first openly-gay champion in company history who has taken out the biggest names in the sport in front of millions – not to mention becoming the third EVER simultaneous double-champ joining only Conor McGregor and Daniel Cormier – you’re telling me that her taking the title off Cris Cyborg, a 33-year-old bilingual Brazilian native fighting in a division struggling to find a single contender, is brutally damaging to the UFC?

Even worse, Rovell thinks a Cyborg win over a tomato can would be more valuable to book than the Nunes rematch right now? I mean…are you kidding me? Who does Darren suggest she face? Megan Anderson literally went in front of cameras this week before UFC 232, and after her victory last night, and BEGGED the UFC to start signing Featherweights because Cyborg has officially run out of feasible opponents and the division as a whole is in jeopardy because of it. Now it’s an issue that the person who dethroned her can face not only anybody they find for her at Featherweight, but also anyone at Bantamweight while 145 develops, the women’s division that the company has seen the most financial success in, Rousey-or-no-Rousey?

It’s just a fantasy-land take made up from the fact that Cyborg’s last two main-event buyrates were better than Nunes’ last two main event buyrates, looking at literally nothing else but those numbers, and maybe their social media numbers?

Which, as we’ve seen with somebody like Derrick Lewis, could literally double over night based on something as simple as a good post-fight interview.

Even looking at Google’s Trends feature, though, interest in the two has been virtually identical over the last year…

All the while the UFC has been pushing Cyborg as a superstar and being criticized by fans CONSTANTLY for not pushing Nunes enough!

Rovell’s point then, about attrition to a casual audience…

Just take a look at one of the most successful, high-drawing divisions in the history of the company: Heavyweight. 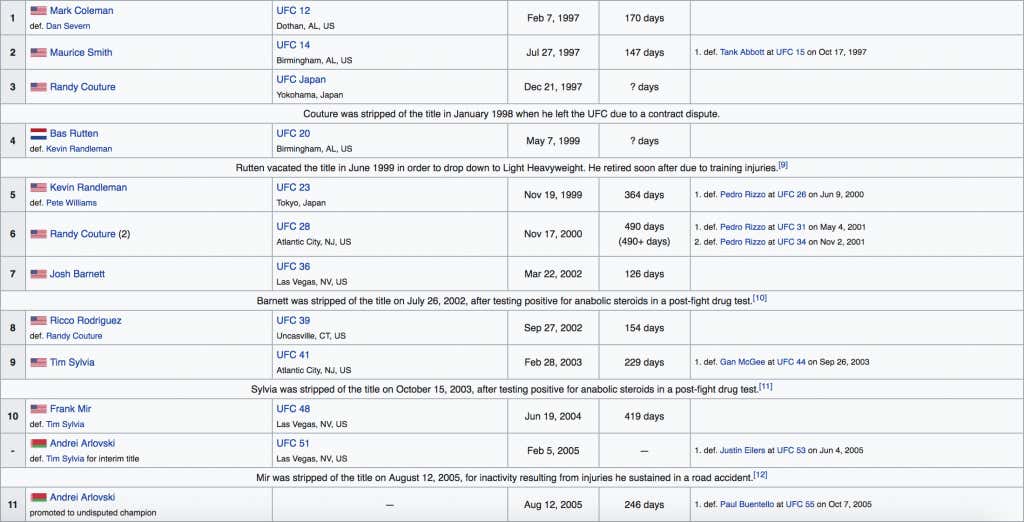 Notice something interesting about the amount of defenses each champion has had? Anything? Maybe the fact that we JUST saw our first UFC Heavyweight Champion successfully defend their title three consecutive times THIS YEAR?!

This is mixed martial arts. This is the UFC. It’s not boxing. There are very few people in the sport who have faced top level competition, have undefeated records, and have long-lasting staying power. Ronda Rousey and Georges St-Pierre are actually the only champions the company has ever had with major staying power at the top proven to work as draws, if I recall correctly. Mighty Mouse, Anderson Silva, Jon Jones, as those of the like have ranged from “eh” to “pretty good”. That is not a detriment to the sport. It’s why we watch the sport. Anything can happen, just like we saw in last night’s co-main event.

To argue that Nunes’ knockout of Cris Cyborg was anything but phenomenal for the company, and did anything but set up what will undoubtably be a MUST-SEE rematch between the two greatest women to ever step foot inside the octagon…it’s just so uninformed I can’t even wrap my head around it.

Still, I’m not sure Rovell’s original tweet was as bad as this one…

Maybe she meant it looked like when Amanda Nunes knocked Ronda Rousey out? I’l give her that…