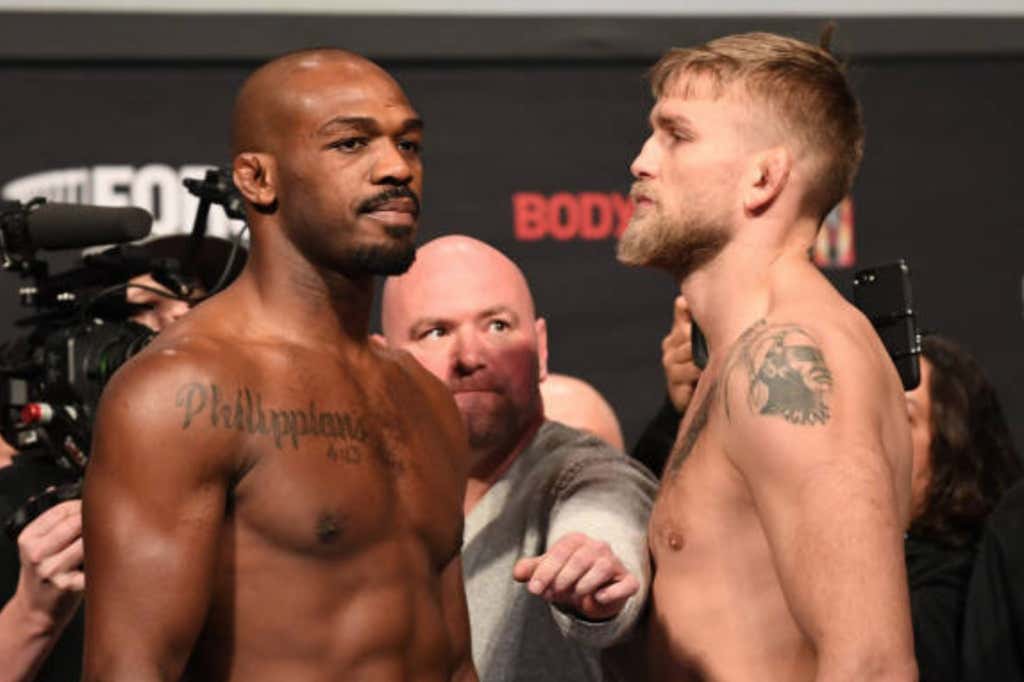 Hey, folks! Hope y’all had a wonderful holiday with your families, friends, whoever ya love. Up front, I’ll address the fact that it’s been a hot minute since I’ve posted a blog. I’ve been dealing with some personal issues over the last month that needed sorting out, and I’m doing my best to sort them out now. Those who reached out in concern – thank you, from the bottom of my heart. Those who tried starting rumors I was “fired”, or any of the like – shove a broken bottle up your ass and take a hike. I ain’t going nowhere. Now let’s talk some barbaric human cockfighting!

Tonight we’re looking at one of the better cards of the year, no exaggeration or hyperbole at all. Originally, it was scheduled to be taking place from Las Vegas, but Jon Jones fucked literally everything up again and got the entire event moved to Los Angeles on six days notice because Nevada wouldn’t commission him to fight for the now-vacant UFC Light Heavyweight Championship. Why, you ask? Well, apparently, that steroid metabolite “one-millionth the size of a grain of salt” he was suspended for in July of 2017 is still in his system – and it’s grown!

Over the last year, it’s grown and shrunk on a bunch of tests that were all covered up by both USADA and the UFC until AFTER Jones was licensed to fight by the California Athletic State Commission. The first time it showed up again (in September), you know what they did?! They revamped the ENTIRE system to no longer require them to have to publicize popped tests until an investigation is concluded. Nothing shady going on there, right?!

It’s an even longer and more fucked up story than it sounds, and I’ll explain it all in a longform blog in the coming days, but there were a lot of true colors from all angles this week, and nobody was pleased about the way it was handled. Except Jon Jones, and Dana White, of course.

I do believe Jones to be the greatest fighter of all time based on the skill we’ve seen him display in the octagon alone, but I also believe him to be the biggest fuckup, cheat, and black eye the sport has ever seen as well. Even LANCE FUCKING ARMSTRONG called out the corrupt operation they’ve got goin’ on. LANCE ARMSTRONG!

(Although he’s got no right to speak, unless you subscribe by THIS theory.)

…and to the journalists who even brought up the fact that Jon Jones has failed yet another drug test, he played the victim card again and again and again, until they got on his nerves, then the true Jon Jones came out:

Controversy aside, though – tonight we’re going to get to watch Jon Jones do the one thing he does that isn’t infuriating: fight. And he’ll be standing across the cage from Alexander Gustafsson, the man who pushed him to his limit and tested him more than anybody in history back in 2013, in an all-time bout some fans still believe Gus won. In the co-main event, UFC Bantamweight Champion Amanda Nunes moves up a division to challenge UFC Featherweight Champion Cris “Cyborg” Justino for her 145lb-title, in what many consider the contest that’ll decide the greatest female MMA fighter of all time. And throughout the rest of the card, you’ve got names like Carlos Condit, Michael Chiesa, BJ Penn, Cat Zingano, Megan Anderson, Chad Mendes…it’s stacked! To the fuckin’ gills! And the best part of it all? It’s on NOW.

Check out this highlight-reel knockout from Uriah Hall, and settle in, cause we’ve got a great night of violence ahead of us.