Is it just me or did the regular season FLY by?

Seems like just yesterday that we were gearing up for 2018 and for our new CFB show (which was a smash hit, if I do say so myself). Now we are seeing all of that football wind down to the last week before someone not named UCF is the new National Champion. Insane. 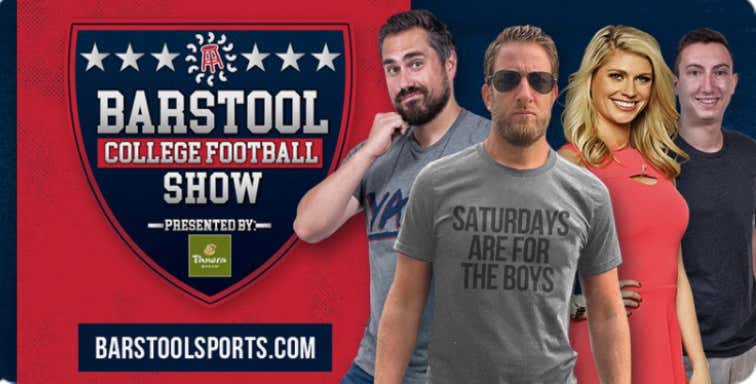 Don’t cry because it’s over, smile because it happened.

Fun fact: This is the first time in the five years of the CFP that two undefeated teams are playing. Wild.
Betting lines (for those into that kinda thing): Clemson (- 11), O/U: 58

Remember in 2012 when Notre Dame went undefeated in the regular season and Manti Teo was a Heisman finalist and had a fake dead girlfriend? If you do, then you probably remember that the Irish got shellacked by Alabama in the BCS (RIP) Championship to a tune of 42-14. Being independent is a blessing and a curse.

So the question today: Is THIS Notre Dame team different?? Or was their schedule light enough/the opponents so down this year that they were able to rattle off all wins without actually being a legit championship contender??

We’re about to find out.

As for Clemson, there’s zero question about good they are IMO.

And if I was an Irish fan, here’s what I’d be a tad worried about: Clemson’s offense AND defense both rank in the top 5 nationally. Balance like you read about. That’s what we call a machine, folks. It stinks for the Tigers that Dexter Lawrence got popped for Ostarine (???) and is suspended tonight. But even with that, I think this defense is ready to roll.

I’m a sucker for good story lines, so I love that both of these teams had guys take over as QB1 mid-season and never look back. Ian Book and Trevor Lawrence both have a shit ton to prove tonight on, by far, the biggest stage they’ve ever seen. And this whole freshman moment people are waiting on for Trevor Lawrence? Don’t think it happening tonight.

Pick: As much as I rode the Notre-Dame-is-going-to-the-CFP train this year (brag), I think that train stops here. I’m taking Clemson to advance.

Oh ya, and Tua casually had surgery at the beginning of this month. But it’s being reported he’ll be good to go for the entire game. If he can’t, there’s the Jalen Hurts factor.

I know I talk mad shit about the Big 12 on the podcast, but I love watching OU play… offense.

I mean their defense is ranked DEAD LAST against the pass. That’s not where you want to be when you’re facing a guy like Tua. But on the flip side, guys like Kyler have historically given Nick Saban headaches a la Urban Meyer. (See: Cam Newton, Deshaun Watson and Johnny Manziel).

If the pocket collapses, he can make something out of literally nothing. He can also force this defense to make plays in space against his receivers and backs. But if OU is going to win this game (and for the over to hit), the Sooners are going to have to score TDs on pretty much every drive.

Pick: As much as I like Kyler Murray, I think his defense is SOL vs Alabama. Especially becasue I think the Tide is playing with a vengeance since they almost lost to Georgia AND Tua lost the Heisman. GOAT gonna GOAT. I’m taking Bama to advance.

PS – It’s actually crazy to think about the fact that both semi-final games have double digit spreads.  If you’re betting today, may the odds be ever in your favor.

If you want to listen to our in-depth CFP Preview while you wait for the games: click here. Happy Saturday, football fans. Soak it up. College football is almost over and I’m going to have a panic attack.