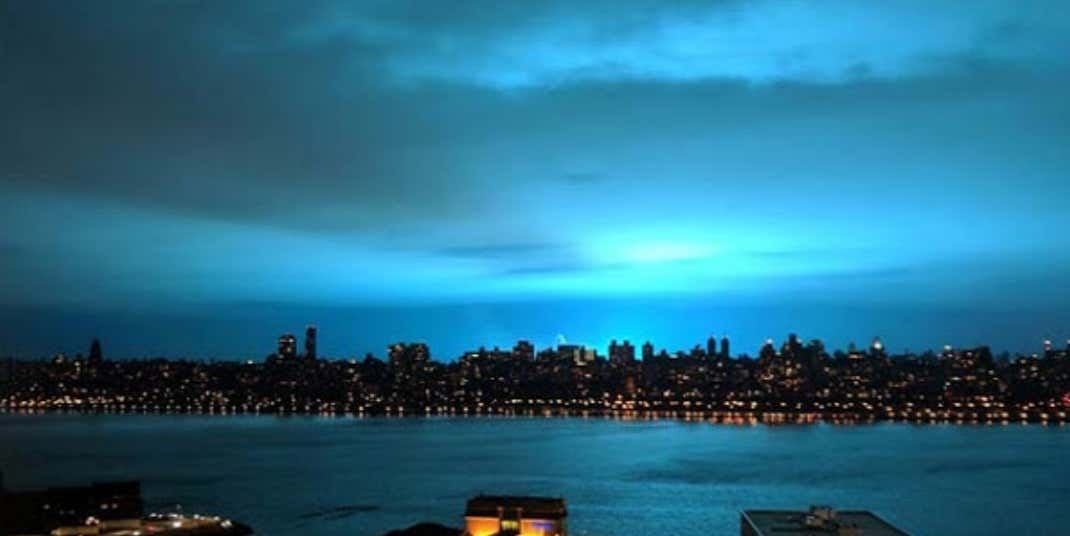 NYP- The electrical explosion that sent a blue flash streaking across the nighttime sky left one Queens resident so terrified, he grabbed a samurai sword thinking “hostile” aliens were about to invade. “I ran into my parents’ room and shouted, ‘Get up, it’s happening!’” said Spencer Pesce, who lives close to Con Edison’s Astoria substation on 20th Avenue and 32nd Street. “I swear to God, I thought it was aliens. It also looked like a nuke attack.” Pesce was on the couch catching up on Netflix on Thursday around 9 p.m. when a piece of equipment 20 feet in the air malfunctioned, sending 138,000 volts of electricity coursing to the ground and creating a reaction known as an electrical arc flash. “I looked outside and it was as bright as day. It was flashing blue,” Pesce said. “And there was like a humming, like a giant machine starting up, you know, like a giant alien spaceship starting up like what you see in the movies.” “I grabbed a samurai sword and left it by my door, put my boots on and went outside. If it was aliens, I was going to defend my family,” he said. “I don’t know what the aliens want.”

That’s what you like to see. Or at least that’s what I like to see. Always stay ready. I see far too many #TeamAlien tweets when something like what happened last night in New York happens. People love to say, “I’m with the aliens. They’re gonna wipe us out if we don’t comply so I’m with them” which I hate so I was happy to see this dude go full Butch Coolidge and grab a Samurai sword when he thought aliens were beaming down into Queens for an invasion. Here’s the thing. We’re not gonna know the intentions of aliens when/if they show up so tweeting out #TeamAlien might seem like a cool idea until you’re ushered onto their UFO and they throw you in a boiling pot and make human stew outta you. That’s what #TeamAlien might get you. If the aliens turn out to be friendly and not hostile, fine. But I’m gonna need some examples of their friendly behavior before I embrace some intergalactic strangers onto planet Earth.

The guy said it perfectly. “I don’t know what the aliens want” and he’s correct. The way to get burned by aliens is to be overly trusting. Because guess what? I bet those mother fuckers won’t just be going for a space joy ride and somehow end up here. They’re gonna want something and it’s up to us to figure out what they want before they eat our brains with alien spoons. That’s why I love this guy having his Samurai sword at the ready just in case things took a turn. I’d fight in a fox hole with that guy any way. Always. Stay. Ready.

By the way, I’m not sure why this is a story to begin with. There’s no hook like Guy Grabs Samurai Sword To Protect His Family From Aliens And Then Inadvertently Stabbed His Neighbor In The Chest. How did they find out that he grabbed his Samurai sword to fend off aliens? Was he just walking around telling people he did this? You know what, that’s exactly what happened. If you’ve ever known anyone who owns a Samurai sword you know how much they love telling people they own a Samurai sword. They probably even carry it around strapped to one of their belt loops.