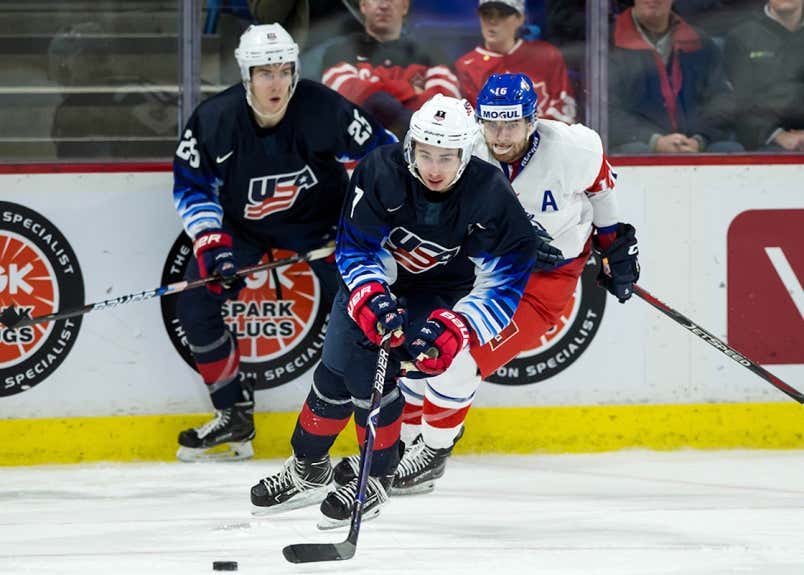 Who: USA vs Slovakia

Where: Save on Foods Memorial Arena (Victoria, BC)

Why: Because USA Hockey is Do or Die.

How To Make Money:

Well, folks, here we go. The 2019 World Juniors are finally underway and Team USA gets their tournament going against the only team who beat them in the preliminary round in last year’s tournament. USA comes into the tournament as one of the favorites to medal. Most people are predicting a silver/bronze showing for the Americans last year but they clearly have the star power to pull off another gold at this tournament. Regardless, people are expecting big things out of this USA group and for Slovakia…well…not so much. It’s not that Slovakia is going to be a walk in the park here or anything like that. They have a few players who have been drafted to the NHL and a prospect who could potentially be a late 1st round draft pick in the upcoming draft with Maxim ?ajkovi?, who currently plays for the Saint John Sea Dogs of the QMJHL.

But make no mistake about it, this is supposed to be a win for Team USA and it’s supposed to be a tune up game before they get to the meat of their schedule with Sweden on Saturday and Finland on New Years Eve. Last year’s loss to Slovakia would make me a little worried about touching the spread on this game since there’s always the chance that Slovakia can keep this one interesting. But I’d probably go pretty heavy on the over in this game. I’d imagine that USA scores at least 6 of their own today and starting off the tournament with a shutout would be a tough order. My conservative prediction is USA 6, Slovakia 2. Guess we’ll have to wait and see.

And oh yeah, here’s a friendly reminder that NHL Network is running a free trial that typically lasts through the preliminary round of the World Juniors. Considering the tournament is on the West coast, I feel the majority of people won’t need to be watching this game at work. So as long as you have a cable provider, you should be able to catch this game on NHL Network. If you need a streaming link, I’ll throw one in here right before puck drop (***Streaming Link Right Here***) Now without further ado, time to activate the LIVE BLOG.
@BarstoolJordie

No scoring so far in the first period but I feel like I should mention that it is a goddamn travesty that USA is wearing the same sweaters from the Olympics. I don’t mean to be dramatic or anything but whoever designed these deserves to get thrown in Guantanamo Bay. Makes me sick to my stomach. 1960 throwbacks or bust. Here is Quinn Hughes bitching to his coach about the god awful decision, probably.

Deep into the 1st period and Slovakia got the best chance so far. Kyle Keyser definitely got some help here from the pipe but great work by him to get post-to-post quick enough to force the tough shot.

Still 0-0 at the end of the 1st period. Obviously that OVER call isn’t looking too hot right now but there are still 40 minutes for this bitch to open wide up.

Well we finally had our first real exciting moment of the game when Jason Robertson was awarded a penalty shot on this…well…slightly soft call.

Robertson then tried to go 5 hole on the penalty shot attempt but turns out you need to buy Slovakian goaltender Samuel Hlavaj dinner first before you put it between his legs.

Well I mentioned above that this game would be close and that Slovakia always loves to keep it interesting against Team USA. Now it turns out they’re looking for a repeat of last year’s upset as Marek Korencik puts the Slovaks on the board first.

Really tough to not score on a penalty shot and then give up the 1st goal of the game, especially as the ice seemed to be tilted in USA’s favor for most of the period so far.

Well I guess somebody gave a pretty arousing speech during the intermission because Team USA came out in the 3rd, got an opportunity on the powerplay and Mikey Anderson shows that just the tip is enough.

Jack Hughes on the assist and now we’ve got a tie game with 18 left in regulation.

And a few minutes later, it’s Penn State’s Evan Barratt with a nasty ass backhander to put Team Freedom up 2-1.

Fuggin’ filllllthy snipe right there from a product of the Greater Philadelphia Area. Not a big deal.

We had our SECOND (2nd) penalty shot of the game and this time it was Slovakia getting the free attempt. But it turns out you have to buy Kyle Keyser dinner first before you put it between his legs. Yes, we are recycling jokes now. It’s been that kind of game.

We knew it was going to be a battle before the game even started. I didn’t necessarily see it being a 2-1 battle with Team USA needing to score twice in the 3rd period to come out of game 1 alive, but a win is a win. Now they have Kazakhstan on Friday before the real tournament starts with Sweden on Saturday and Finland on New Years Eve. USA! USA! USA!

Thanks to all for checking in throughout the night. See you beautiful bitches on the other side.