The Chicago Bears win their third NFL Championship in four years, once again beating the Washington Redskins in the Championship Game 41-21 at Wrigley Field. At the time it was the latest the NFL season ever ended as frigid conditions led to it being called the “Ice Bowl”. Sid Luckman led the way for the Bears, passing for 286 with five touchdowns, as the Bears defense forced six turnovers. 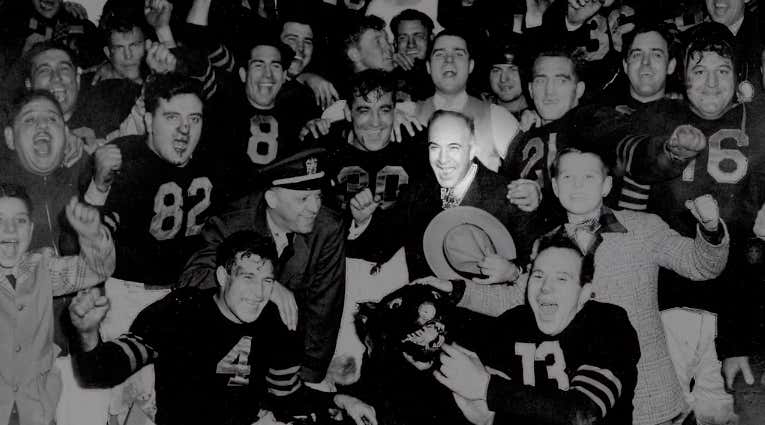 After their upset of the Bears in 1942, the Redskins had to find a new coach as Ray Flaherty left to serve in the Navy, during World War II. With Dutch Bergman leading the way, the Redskins got off to a good start, going 6-0-1 in their first seven games. However, they ended the season with three straight losses and were forced to play the New York Giants at the Polo Grounds for the Eastern Division Championship. Despite two losses to New York in the last three games, the Redskins recovered to win 28-0 at the Polo Grounds to earn a third matchup with the Bears in four years.

Like Ray Flaherty, George Halas was serving in the Navy, leaving Hunk Anderson and Luke Johnsos to run the team his absence. The Bears dominated again, posting an 8-1-1 mark to finish one game ahead of the Green Bay Packers for the Western Division Championship. The Bears were given a boost by the return of Bronko Nagurski, who retired in 1937 and became a professional wrestler.

With 34,320 fans on hand at frigid Wrigley Field, the Redskins opened the scoring in the second quarter on a one-yard run by Andy Farkas. The Bears would quickly answer as Harry Clarke caught a 31-yard touchdown pass from Sid Luckman. Chicago would take a 14-7 lead before halftime, as Bronko Nagurski on a three-yard run. In the third quarter, the Bears extended their lead as Luckman connected with Dante Magnani on a 36-yard touchdown pass. Sid Luckman and Magnani connected again on a 66-yard pass to make it 27-7, as the kick failed. Washington tried to get back in the game with Slingin’ Sammy Baugh completing a 17-yard touchdown pass to Andy Farkas. However, Washington had no answers for Sid Luckman, had fourth-quarter touchdown passes to Jim Benton and Harry Clarke. While Baugh connected with Joe Aguirre on a 25-yard pass, but the game was out of reach by then as six turnovers derailed any chance the Redskins had to win the game.