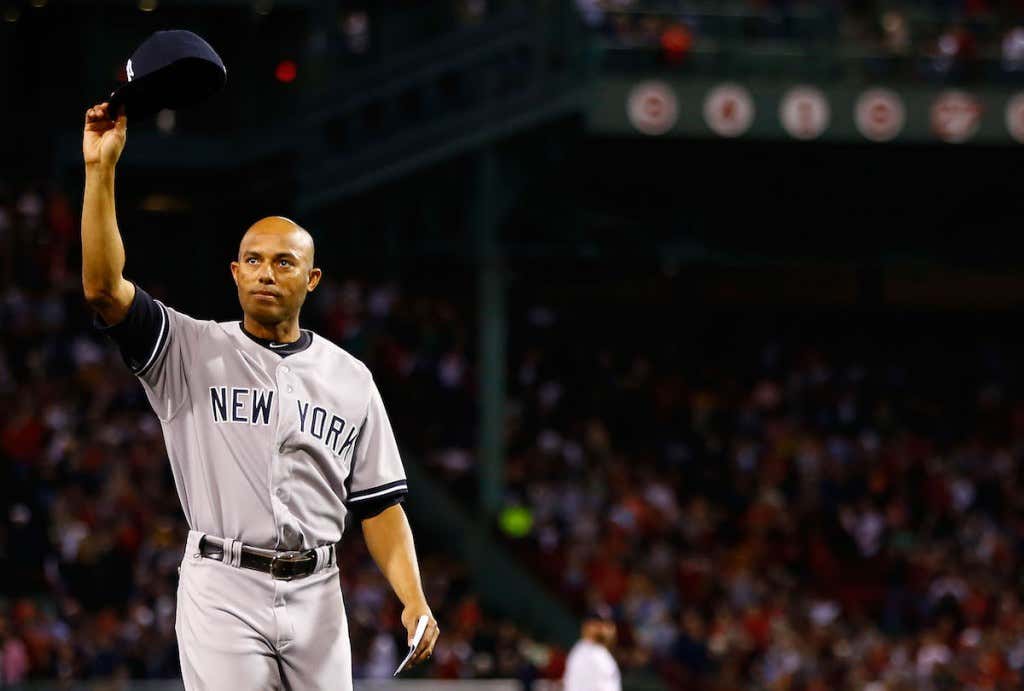 If you have a Hall of Fame vote and you do not vote for Mariano Rivera, you are an asshole. That’s just a fact. You are.

Now, I’m not going to be one of those baseball fans who cries if Rivera doesn’t get in unanimously. He should. But he won’t. Nobody ever has, and maybe that’s the problem. That being said, getting in on the first ballot will suffice for me. He deserves that much. However, I will gladly challenge the logic of any of the writers who leave him off their ballot, simply because there is no justification for it. There have been writers in the past who have left slam dunk candidates off their ballots for bullshit reasons like, “If Babe Ruth didn’t get in unanimously, then nobody should.” Give me a fucking break.

Babe Ruth should have gotten in unanimously. That was incorrect. Many others have deserved that distinction, too. That doesn’t mean that writers need to intentionally fuck up the voting forever because the voting in the past was fucked up. I don’t understand that at all. Thankfully, most, if not all, of the writers who think like this are pushing 100 years old and they will lose their functionality to complete the physical act of checking off a box relatively soon.

I’ve also seen writers who have left slam dunk candidates off of their ballots because they’re under the impression that said candidate will get in anyway, so they use their 10 votes elsewhere on candidates who could use the extra support. That’s fine and all, but if there’s a name on that ballot who you feel more strongly about, then you should vote for them over somebody of lesser impact. There’s a reason why some players get far more support than others. It’s because they’ve had significantly better careers, and their voting percentage should reflect that.

In the case of Mariano Rivera, you are talking about the greatest closer of all-time. There is no close second. The reason for this post in the first place is because I’m reacting to Bill Ballou of the Worcester Telegram’s piece in which he wrote that he will not be voting for Rivera (or anybody for that matter), but still acknowledges that Rivera is, in fact, the greatest closer of all-time.

Let’s start with a legal term and stipulate that Mariano Rivera is the greatest closer in baseball history. Even so, I am not voting for him for the Hall of Fame, and three people come to mind as part of the reason why — Craig Kimbrel, Adam Viniateri and Taylor Dakers.

He goes on to talk about how closers are essentially overrated and how the biggest outs aren’t always in the ninth inning — which, at least, that part is true — and how he’s not submitting a ballot at all. I guess that’s better than submitting a blank ballot so that it counts against Rivera’s percentage. Regardless, it’s an injustice. There are closers who are already in the Hall of Fame. The precedent has already been set. We’re not debating, for the 500th time, whether or not a DH should be elected. Closers are in, and Mo was the greatest at the position. End of story.

I could rattle off a bunch of Rivera stats that would blow your mind, but I’m assuming you already know how great he is. The point isn’t to convince you that he’s worthy of being unanimous, and it’s not really to convince this dude, either. The point, really, is to shine a light on how stupid the voting process has become. Voters have pissed and moaned about how difficult it is to play gate keeper as it pertains to steroid users, either proven or speculated, and then you’ve got a shining example of a guy who did it the right way on his way to Cooperstown, and we’ve still got voters like Bill here who want to indirectly say, “While everyone is out here praising Mo for the career he had, don’t forget about Bill!”

It’s dumb. You can argue that closers aren’t always getting the most important outs of the game and how the save statistic could use a facelift in terms of how it’s given out at the end of each game, but don’t sit there and tell me that Mariano Rivera wasn’t one of the greatest pitchers that you’ve ever seen toe a rubber. That’s when you sound like an asshole. Rivera basically told you what pitch was coming and for 19 years, nobody could hit it. And in doing so, he got some of the biggest outs in baseball history along the way.

These holier than thou writers who feel compelled to make some grand statement with their Hall of Fame ballots don’t deserve a Hall of Fame vote to begin with. If you don’t want to vote for the Hall of Fame, then give up your vote entirely instead of protesting like a pretentious prick. There are plenty of other capable baseball minds out there who would gladly check off the box next to Rivera’s name. Dickhead.